It's exactly what many oil and gas companies wanted to see, despite how much credit they give Rachel Notley for her performance during her single term in power.

'Hopefully we can start getting some positive results,' says energy company CEO

After four years of declining investment in Alberta's oil and gas sector, the industry is hopeful a swift change in government will bring an equally quick return of fortunes for the oilpatch.

It's exactly what many oil and gas companies wanted to see, despite how much credit they give Notley for her performance during her single term in power.

In the last couple of years, Tamarack Valley Energy CEO Brian Schmidt has struggled to attract investors when he holds meeting in places like New York. A new provincial government could be enough for pent-up investment dollars, and the accompanying jobs, to start flowing into Alberta.

"Finally we have something they will look at as positive," said Schmidt. "For investment, this gives a big boost to our jurisdiction."

Notley consistently tried her best to support the industry amid low oil prices, said Schmidt, but he has more trust in Kenney to streamline regulations and to fight off federal government policies that could hurt the sector.

Kenney's promise to set up a "war room" to defend the sector against misinformation and attacks on social media and elsewhere is important, as is a fresh approach to getting pipelines built, said Tristan Goodman, president of the Explorers and Producers Association of Canada.

Notley tried to work with all stakeholders to build support for more pipelines, while Kenney has signalled he'll be much more combative in dealing with opponents.

"Notley did a lot of work to try to underpin why we should move forward with pipelines and, unfortunately, that wasn't supported, I don't think, by the federal government," said Goodman.

During the campaign, the UCP pledged to get rid of the carbon tax and all other policies that are part of the NDP's climate plan, including the accelerated phase-out of coal-fired power plants and a cap on total oilsands emissions.

The party also vowed to replace the entire board of the Alberta Energy Regulator, and to streamline the agency to reduce the amount of red tape for oil and gas companies wanting to drill new wells or build new oilsands projects.

"There's no question that I think there are opportunities to look a little deeper [at] some of the streamlining, and just reducing some of the duplication that has occurred over the last several years," said Goodman.

In addition, Kenney vowed to stop Notley's plan to lease thousands of oil-tank railcars, and has threatened to turn off the supply of oil to B.C. if the province continues to obstruct construction of the Trans Mountain pipeline expansion.

After stubbornly low commodity prices since late 2014, the value of Alberta oil has stabilized recently. Since the beginning of January, when the Alberta government's mandated cuts to oil production began, heavy oil in the province has sold for more than $40 US per barrel and even climbed above $50 this month.

There is, however, some skepticism about what a Kenney victory will mean for the oilpatch.

"A Kenney-Trudeau showdown over energy and climate policy raises a number of significant risks for investors, as further delays, lawsuits and federal-provincial negotiations will make final resolution of key policy issues and project approvals harder to achieve," the Eurasia report said.

As much as Kenney vowed to fight for the oilpatch as he toured the province during the campaign, he also routinely criticized large oil companies in the country, mainly because of their support of a carbon tax.

In Alberta, the larger oil and gas companies are more likely to support a carbon tax or climate policy than small or medium-sized companies. Kenney's critiques were an unusual strategy, said experts, considering premiers of the province have usually gone out of their way to court support from energy-industry leaders.

While business has picked up in recent months at Performance Energy Services, CEO Scott Darling expects Kenney's victory will inject further optimism into the oilpatch. Admittedly, he said, he's pretty happy with the election result.

All of Kenney's advocacy for getting more pipelines built to improve the province's sluggish economy appeals to him. Darling is also counting on investors around North America to take notice.

"[Investors in] Toronto, New York and those places have been just petrified of us for a while," he said. "Hopefully we can start getting some positive results."

Schmidt, with Tamarack Valley Energy, expects Kenney's win to translate into more meetings with investors and better luck with them buying back into the sector.

"How fast and how hard they come in — that's what remains to be seen." 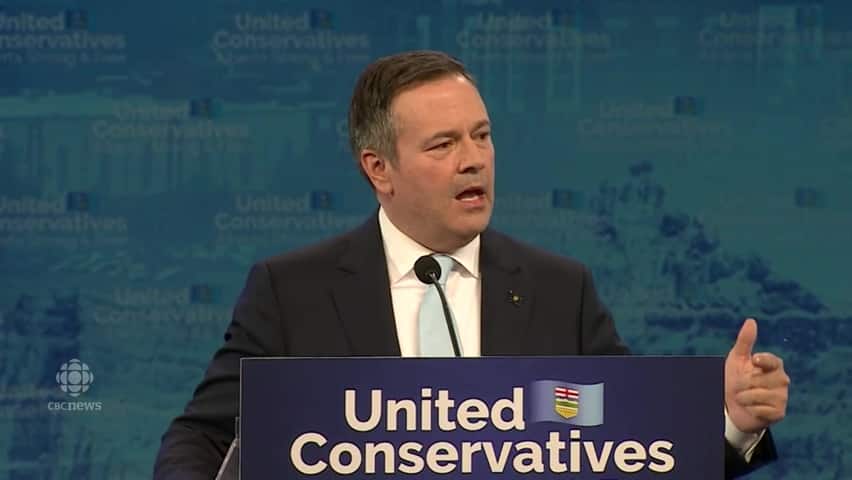 2 years ago
30:15
The UCP leader is projected to form a majority government, capping his three-year goal of uniting Alberta's political right. 30:15