New hotel quarantine rules for air travellers are now in effect. Here's what you need to know

The federal government's new hotel quarantine requirement is now in effect for air travellers. Here’s the latest on what we know, including the hotel cost and who is exempt.

Rules off to bumpy start with jammed phone lines, confusion over exemptions

The new regulations are off to a bumpy start, with complaints from some travellers that they can't get through on the government phone line to book their hotel, or they can't figure out if they're exempt from the rules.

Here's the latest on what we know, including the cost of the hotel quarantine.

How do I book a room?

Most air passengers will now have to take a COVID-19 test after landing in Canada and spend up to three days of their 14-day quarantine period in a designated hotel to await their test results.

Passengers must pre-book their hotel stay before arriving in Canada.

There is no option to book online, so travellers must call a dedicated phone line to reserve a room.

Since the phone line launched on Friday, CBC News has received several complaints from travellers that they couldn't get through on the phone to book their accommodation.

I’m finding the same thing! First the recording said it was a three hour wait, now I can’t even get on hold that keeps disconnecting me. WHY CAN’T WE BOOK ONLINE??? <a href="https://twitter.com/hashtag/quarantinehotelfail?src=hash&amp;ref_src=twsrc%5Etfw">#quarantinehotelfail</a>

"The hold music that's playing for, like, three, three and a half hours, suddenly it stops and the call gets dropped," Vineeth Nair said on Sunday, after trying — without success — since Friday to book his hotel.

Nair, a permanent Canadian resident living in New York, is set to fly to Toronto on Thursday due to a work transfer. But he said he's worried he won't be able to reserve his hotel in time.

"It's a state of confusion right now. First of all, I'm moving countries, so it's not making it easy for me."

On Tuesday, the Public Health Agency of Canada told CBC News that the phone problem is being addressed and that government officials at the airport will assist arriving travellers who have not yet been able to reserve their room.

Also on Tuesday, Minister of Intergovernmental Affairs Dominic LeBlanc said at a news conference that it would be up to the discretion of border officers whether to fine people who arrive in Canada with no hotel booking.

Passengers who successfully get through on the phone line must book a room for three nights — even though they only have to stay for as long as it takes to get their test results.

Travellers who test negative can leave immediately and finish the rest of their 14-day quarantine at home. Those who need to take a connecting domestic flight can book it at this point and fly home.

People who test positive will be required to finish their quarantine at a designated government facility.

PHAC said the decision about whether people allowed to check out early could get a rebate would be up to the hotel.

"Travellers should be prepared to pay for a three-night stay," spokesperson Tammy Jarbeau said in an email.

Hotel stay could be much cheaper than $2,000

When Prime Minister Justin Trudeau announced the new hotel quarantine rules on Jan. 29, he said the cost of the three-night hotel stay is "expected to be more than $2,000."

But it turns out the total, which includes meals and transportation, may be much less than that — depending on where you stay, as prices vary widely.

The Acclaim hotel in Calgary charges $611, including taxes, for the three nights, an employee said.

That's a significant price difference from the Westin Wall Centre Vancouver Airport hotel, which, according to an employee, charges $1,827, including taxes. 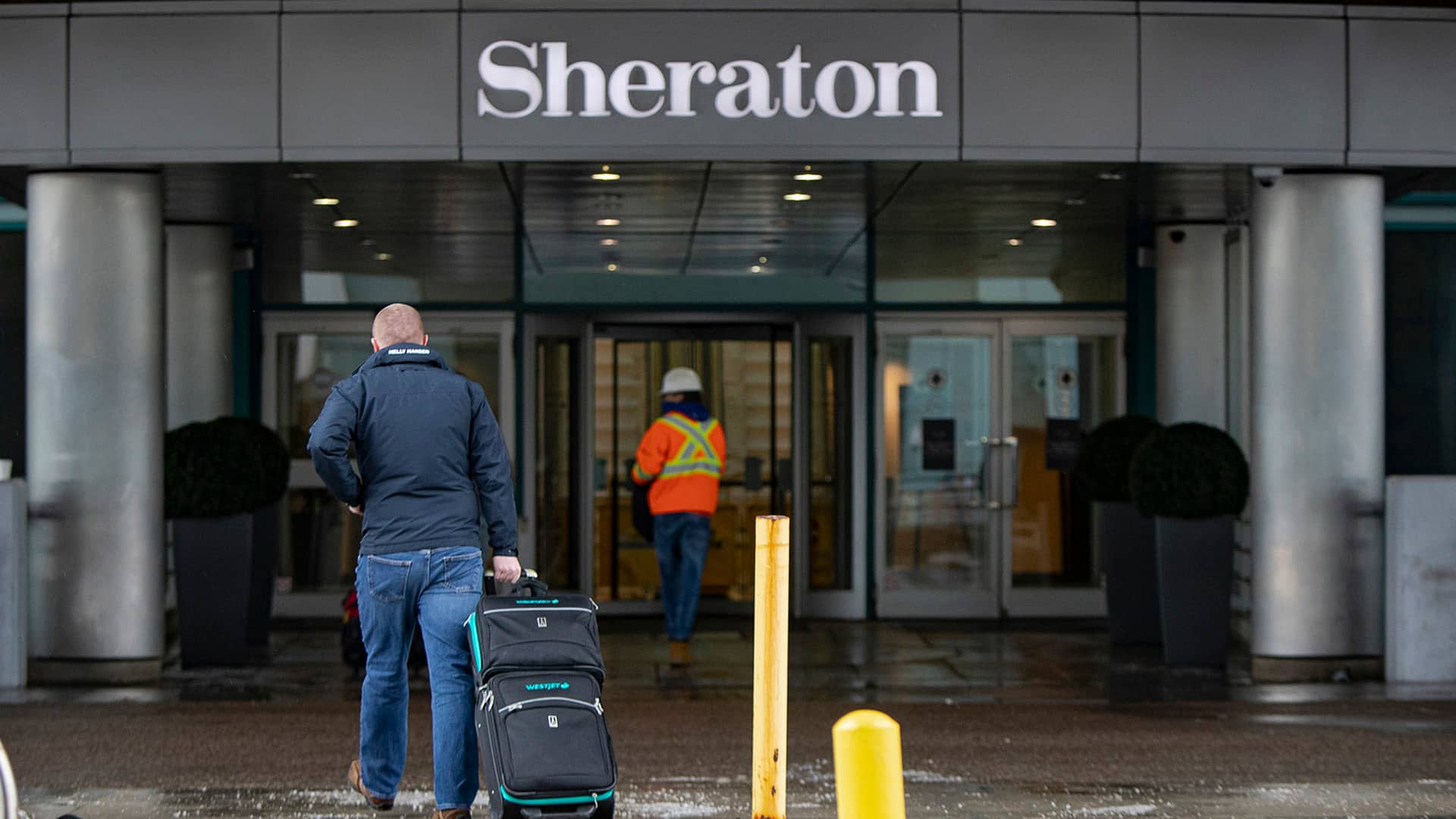 10 days ago
1:57
Travellers entering Canada by air are now required to arrange a three-day hotel stay to await the result of a COVID-19 test, but there’s frustration around varying costs and how to book a room. 1:57

A traveller flying to Toronto, who did not want her name published, showed CBC News her quarantine hotel booking confirmation at the Four Points by Sheraton. It totalled $1089.41 including taxes.

At a news conference on Friday, Health Minister Patty Hajdu said the final price tag is up to the individual hotel.

"The hotels are doing the billing directly, and different hotels will have different rates."

PHAC said that, at this time, the government won't charge travellers for their post-arrival COVID-19 test.

Will I be exempt?

CBC News has received dozens of inquiries from people who travelled abroad for non-discretionary reasons — such as for school or work — and want to know if they're exempt from the hotel quarantine requirement when returning home.

Alexis Pearman of Mississauga, Ont., is set to fly home on March 10 after completing a masters in physiotherapy at Glasgow Caledonian University in Scotland.

Pearman said she has contacted numerous government departments but has yet to confirm whether she and her fellow-Canadian classmates will be exempt from the hotel quarantine.

"As the days go on, it kind of becomes more disheartening and more frustrating, not having an answer and then ... trying to have to figure out how we're going to pay for this quarantine," she said.

When CBC News asked PHAC for specific details about exemptions, it sent a link to a new government information site.

Unaccompanied minors are also exempt, as are people with compassionate cases, such as those attending a funeral, if they get government pre-approval.

But in general, travellers who are required to quarantine — including students returning home from abroad — will have to book a room in a quarantine hotel. That includes people who have already received the COVID-19 vaccine, as they are not exempt at this time.

"Our government has been extremely clear that very few exemptions will be consented to, and they're really related to essential travellers," Hajdu said on Friday.

What if I don't comply?

Travellers who don't comply with the hotel quarantine rules "may be subject to a range of enforcement measures under the Quarantine Act," PHAC spokesperon Jarbeau said.

She added that maximum penalties include a fine of up to $750,000 and/or six months in prison.