Here's how to buy a home in Australia: Should Canada follow its lead?

Marketplace investigated how Canadian homeowners can be at a disadvantage when it comes to the real estate market. Here’s why Australia’s consumer-friendly system could have some answers.

In Canada's hottest real estate markets, bidding on a house can feel like a competitive sport. But is the property game as fair as it could be?

Perhaps not — at least not compared to Australia's way of doing things.

Like Canada, many of the real estate markets Down Under are in overdrive, with multiple prospective buyers often competing for a single home.

But Australia's preferred method of selling property — where buyers stand out front and openly bid through an auction — couldn't be more different than the system here.

CBC Marketplace recently investigated how Canadian consumers can be at a disadvantage when buying a home, as bids are kept secret, allowing for possible manipulation. Using hidden cameras, Marketplace documented real estate teams in the Greater Toronto Area breaking the real estate act and its code of ethics.

Would a system similar to the one operating in Australia change things for the better for would-be homebuyers here? You be the judge. Here are three key differences between our two systems.

Consumers have more information in Australia

What do you think you need to make an informed choice when it comes to buying a home?

Australians have access to a lot more real estate data than we do in most parts of Canada. Buyers can obtain home inspection results, sale-price histories and information on recent sales of comparable and neighbouring homes — without going to an agent to get the information.

The result? Most buyers don't use agents.

Almost six million Australians — about a quarter of the country's population — access one of the country's most popular real estate information websites every month. Realestate.com.au is a free site that provides a wealth of data to help assess value or determine a potential bid.

Most Canadians aren't so lucky.

In Nova Scotia and New Brunswick, homebuyers can access sales and price history for properties on their own. But in the rest of Canada, that information is typically held close by agents.

For years, Canada's Competition Bureau has been unsuccessfully fighting to get more information into the hands of consumers. In June, the federal Competition Tribunal ordered the Toronto Real Estate Board (TREB) to let brokers release more sales data to the public.

TREB is appealing the decision.

Property data isn't the only thing that's open in Australia.

If you want a house in a hot market, you usually have to bid for it — but that bidding war takes the form of an open auction, a practice that's been in place since the 1800s. 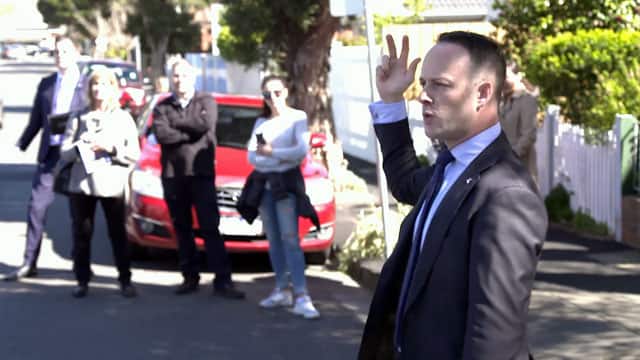 4 years ago
2:01
It may seem bizarre to Canadians, but many houses in hot markets in Australia are sold by auctions. The system means that bidding wars happen in the open, not in secret like here in Canada. 2:01

Bids are kept secret in Canada and no would-be buyer knows what the others have offered. In Australia, the process is transparent.

Over about a four-week period leading up to the auction, interested house-hunters can schedule visits and inspections on the home in order to prepare their bids.

Then on bidding day, typically a Saturday, interested buyers gather on the sidewalk outside the home and place their bids out in the open, in an auction led by the seller's agent.

The process usually lasts about 10 to 15 minutes and the spectacle often attracts an audience who just come by to watch. It's not uncommon for house-hunters to attend multiple auctions in one day, quickly moving onto the next property on their list if they fail to win a home.

"We love it because it's really transparent," says Melbourne real estate agent and auctioneer Elliot Gill. "Buyers can see exactly what the competitors are doing, and they can decide whether they want to keep going or not."

Since all bids are public, no one bidder has an advantage.

Canada and Australia both have codes of conduct that require real estate agents to act honestly, fairly and reasonably in their dealings with clients.

But Australia's laws go further when it comes to consumer protection.

Agents are forbidden from double-ending deals, meaning they are not allowed to represent both the buyer and seller in any one transaction.

Such deals are legal in most of Canada and result in a lucrative double commission for agents. But they can also be a conflict of interest and, as the Marketplace investigation reveals, may cause some agents to break the rules.

The system there isn't perfect. Despite the protections, some first-time homebuyers in parts of Australia still feel shut out, due to rising prices and intense demand.

The law doesn't prevent an eager buyer from making an early bully bid in an attempt to skip the auction and buy early.

And just this past year, Australia introduced reforms to prevent sellers from "price-baiting," where properties are listed for well below market value in order to drive up interest.