Playboy Enterprises: For every success a pipe dream

While Playboy's legacy in terms of sexuality and nudity in its magazine will likely dominate the headlines, Playboy Enterprises has been involved in a host of ventures through the decades.

Company never a player in movies or music, but it makes money licensing its iconic logo

The death of founder Hugh Hefner leaves the future of Playboy, now a private company, an open question.

While Playboy's legacy in terms of sexuality and nudity in its 64-year-old magazine will likely dominate the headlines, Playboy Enterprises got involved in a host of ventures through the decades.

"Don't confuse us with the guys who go out and buy a sewing‐machine company one week and a spark-plug firm the next. Everything we do comes out of the Playboy idea, the Playboy outlook," an executive protested in a 1972 New York Times profile of the business.

But while some endeavours seemed to make sense, they didn't fly as high as Hefner's Big Bunny DC-9 private jet. The company has also had a history of circling back to ideas that failed earlier.

After 40 years on the stock exchange, Playboy went private again in 2011, its share price under $6 US. That price was an all-time high $33 just 12 years earlier, some analysts evidently believing the company was well poised to be a category leader in online adult entertainment.

That didn't happen, and with female nudity just a few clicks away and the magazine industry losing subscribers and advertisers — Hefner died just days after another cultural print touchstone, Rolling Stone, was put on the market — Playboy's magazine may be outlasted by other company businesses.

Only some clubs keyed success

The first Playboy Club opened in Chicago, then the base for the magazine, on Feb. 26, 1960. Miami followed a year later and over a dozen other U.S. cities would boast a club within the decade, as well as Montreal and Manila.

The clubs were meant to provide a sophisticated venue for drinks, fine dining and entertainment, and so-called keyholders were able to bypass lines in any city. However, Gloria Steinem, on a magazine assignment, and other former hostesses would depict the other side of the supposed glamour, the demeaning and low-paying work experience.

By 1972, the Wall Street Journal and the Times were reporting on worrying signs for Playboy's club business, citing overexpansion. Playboy's magazine may have been at its peak at the time, but the smoky, Rat Pack vibe of the clubs, with jazz and suited standup acts, was out of tune with the counterculture.

"These kids these days don't want to sit around and listen to some old saloon comic," an executive told the Times.

Playboy didn't get out of the club business entirely, but began to shift focus in the late 1970s and early 1980s to smaller cities such as Buffalo, N.Y., Lansing, Mich., and Des Moines, Iowa. But by that point, most cities had a strip club, if ogling and not sophistication was the goal.

No clubs opened for over a decade before the company looked internationally again as the 21st century beckoned, including in Greece, Germany and Asia.

Playboy entered into a venture to host a club at the Palms Casino in Las Vegas in 2006. The logo was emblazoned on the side of the nearly 60-storey building, but the club was done by 2012.

Still, the concept isn't dead in the U.S. This year brought news that a hotelier will bring back a Playboy club to New York City.

Hefner and other company spokespeople were boasting in media profiles in the early 1970s of hotels, casinos and resorts in Jamaica, as well as the less exotic Lake Geneva, Wis., and Great Gorge, N.J., but London's success was helping offset their mixed fortunes.

These failed ideas helped drive pre-tax profits for the company down from $20 million US in 1973 to just $2 million two years later, according to the biography Mr. Playboy: Hugh Hefner and the American Dream by Steven Watts. Playboy made an external hire of an experienced corporate executive to address the "conglomerate fever" that had proven ill-advised, with the non-profitable casinos shuttered.

In the 1980s, questionable credit practices to gambling whales saw Playboy lose its British gaming licence, and hopes for an Atlantic City casino were dashed when Hefner wilted under aggressive questioning from state gambling board officials.

According to a feature in Foreign Policy, Playboy was earning 40 per cent of its $500 million in 2014 licensing its logo in China for clothing, accessories and other products. Playboy got back into gaming with casinos in Macau and Shanghai, as well as London.

Hefner had once worked for Esquire and was a lover of movies and Hollywood, but a glossy celebrity-filled Show Business Illustrated magazine in the early 1960s flopped.

In its narrow category, Playboy operated without significant mainstream competition for over 15 years. Penthouse hit the U.S. market in 1969 and was soon selling in seven figures. A spate of other men's magazines followed, including Gallery, Hustler and High Society.

Hefner wanted to take back some of that share, and with a French partner put money in 1972 into Oui, a variation on his own theme with a "European accent."

Hefner's Playboy's Penthouse and later Playboy After Dark were syndicated to TV markets in the '60s, featuring interesting guests but a rather wooden impresario as host. 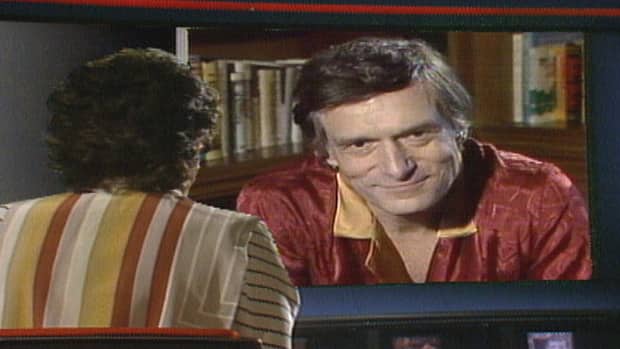 3 years agoVideo
11:17
Hugh Hefner defends Playboy TV's arrival to Canadian cable in this 1983 interview with the CBC. He also talks to Barbara Frum about the Playboy Olympics, stereotyping women and whether Playboy is out of date. 11:17

Movies were not a successful endeavour. Playboy Productions debuted on the big screen with 1971's Macbeth, from not-yet-notorious director Roman Polanski. The movie, which cost a reported $3 million US, was a box office flop. Even less successful was The Naked Ape, only notable for featuring future TV staple Victoria Principal (Dallas).

The Playboy Channel was launched in 1983, with a lineup of risque movies. On a promotional tour, Hefner engaged in a contentious interview with Barbara Frum of CBC News.

According to many reports, the paterfamilias of Playboy was never overly comfortable with the adult movie play, but daughter Christie, the CEO, saw a business opportunity later in the decade as competitors like Spice and Adultvision took advantage of the expansion of channels in the television universe. Playboy TV would be its new name upon relaunch in 1989 and the network would go 24 hours, featuring not just movies, but also lifestyle and sex advice shows.

By many accounts, booze and cocaine were poured out liberally in the 1970s where record label promo men, radio station managers and other industry figures intersected, and disco often provided the soundtrack at Playboy Mansion parties. While Casablanca Records rode that formula to success (Donna Summer, Kiss) and excess before flaming out, Playboy's music foray only lasted a mostly dull half-dozen years before a major label took the money-loser off its hands.

Playboy the magazine may have been cutting edge at one time, but the music division strictly reflected middle-of-the-road sensibilities: soul crooner Al Wilson, country artist Mickey Gilley and Hefner's girlfriend, Barbi Benton, among others.

Of note: Through a licensing deal, Playboy released to North American audiences early Abba material, but didn't have the distribution to take the Swedes to the heights in the U.S. to which they would eventually ascend. The label also boasted a No. 1 Billboard hit in 1975 with Fallin' in Love by Hamilton, Joe Frank & Reynolds.

Ahead of its time?

In the 1972 profile in the New York Times, an executive talked about constructing Playboy "apartment colonies" for single people across the country, linked by a computerized reservation system.

"So a guy, say, in our Santa Monica colony who wanted to move East could query the computer and get word that an apartment was available in Miami," the long-forgotten exec said.

This AirPnP of its time, if you will, ultimately proved unworkable and was scrapped.

Chris Iorfida has worked in TV news, radio, print and digital in his journalism career. He has been with CBC since 2002 and written on subjects as diverse as politics, business, health, sports, arts and entertainment, science and technology.