A prominent commodities analyst struck a gloomy tone as he delivered a blunt assessment about the Canadian natural gas industry's fortunes this year, describing it as a "sad story."

Gas producers should brace for a tough year with many challenges, says analyst

A prominent commodities analyst struck a gloomy tone as he delivered a blunt assessment of the Canadian natural gas industry's fortunes this year, describing it as a "sad story."

In front of a few hundred oilpatch members at the Calgary Petroleum Club in the city's downtown, commodities analyst Martin King admitted his Tuesday morning presentation for gas was one of his most negative.

"Prices are likely going to be very volatile, there could be some chaos out there this summer," the GMP FirstEnergy analyst told the crowd. "We're going to have to kind of face the music on this one."

We have a lot of problems on our hands.- Martin King, GMP FirstEnergy

Speaking to reporters afterward, King struggled to find much reason for optimism. He said there are problems with too much supply in Alberta, weak demand, and pipeline constraints to move gas to market.

"For Canadian gas, we're facing a lot of challenges," he said. "Absolutely, no doubt about it. We have a lot of problems on our hands." 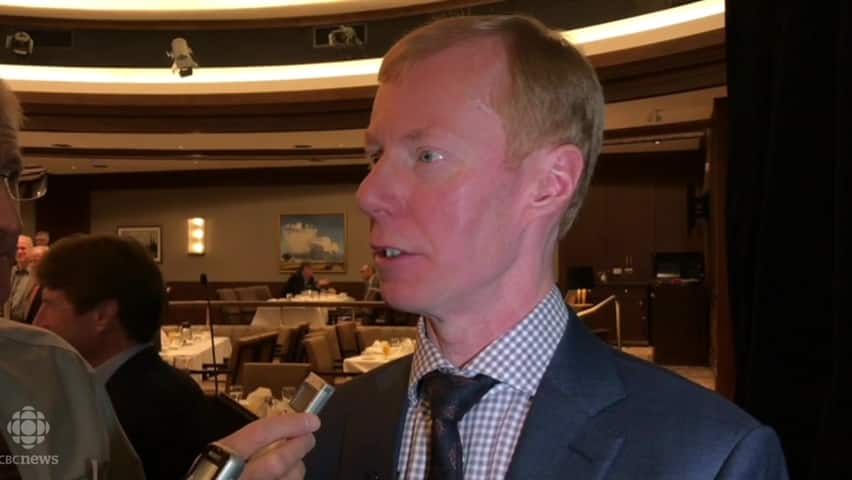 The natural gas industry has struggled for several years, and hopes for a price turnaround are fading. Companies are slashing their spending plans for 2018 and will drill fewer wells. For instance, Calgary-based Peyto Exploration & Development announced this month it was cutting its 2018 budget to about $225 million, from around $375 million last November. Its production is expected to fall by a few per cent.

Companies are also considering shutting some gas wells down until prices improve.

The industry's struggles come at a time when companies are unlocking more and more natural gas. Estimates for Western Canada's ultimate gas potential have tripled in the last decade because of technological advancements, such as horizontal drilling and fracking, according to the National Energy Board.

King had previously forecast 2018 Alberta benchmark gas prices, known as AECO, to average $3.61 per thousand cubic feet, but dropped his estimate dramatically on Tuesday to just $2.21.

"We substantially cut our AECO price outlook and even that's looking optimistic," he said.

Natural gas production keeps climbing in Alberta and spiked in late 2017, jumping about 10 per cent in an eight-week period.

"I've followed Canadian gas for 25 years and never seen anything like it on that scale, that fast," said King.

Natural gas demand is relatively stagnant in Canada, even as the oilsands expand and Alberta transitions from coal power plants in favour of natural gas-fired electricity. The United States is increasing how much natural gas is exported from liquefied natural gas terminals, however, some Canadian producers are finding it difficult to transport gas out of Alberta as pipelines reach capacity.

"We certainly have to get through 2018 and see how it shakes out and how bad things get," King concluded.