General Electric CEO Jeff Immelt has led the company away from its roots as a manufacturer of consumer good and industrial machinery to a new focus on infrastructure and what he calls its future in analytics. 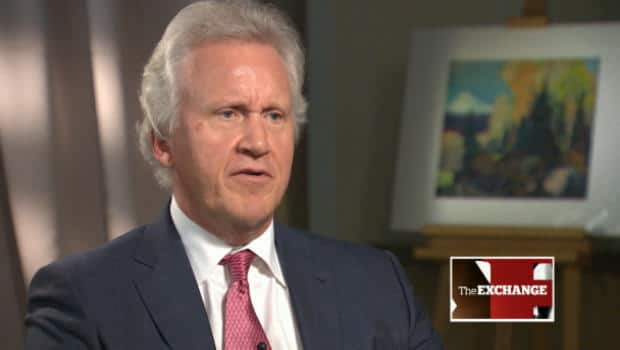 General Electric CEO Jeff Immelt has led the company away from its roots as a manufacturer of consumer good and industrial machinery to a new focus on infrastructure and what he calls its future in analytics.

This spring, GE won the bidding for Alstom, the French engineering group and maker of power equipment. It sold its appliance arm to Electrolux, getting out of the consumer goods business. And it forecasts GE Capital, its financing arm which was hard hit in 2008, will soon be responsible for only 25 per cent of the business.

The transformation is part of a strategy to evolve with new technology that is so central to industry today, Immelt said in an interview with CBC’s The Exchange with Amanda Lang.

The means following customers wherever in the world they go and getting deeper into technology, especially monitoring data to improve performance.

“What I’m most optimistic about  is GE’s ability to transform ourselves,” Immelt said.

Investors are not yet convinced of GE’s successful transformation. Its stock is down seven per cent this year, and has lagged the Dow and S&P index for seven months.

Immelt is more concerned with trying to keep a massive company nimble.  He says the focus is global, which is how Alstom plays into the mix.

“We have a clear glimpse of what we’re good at — technology, globalization, intimacy of customers, scale. I think global infrastructure markets fit that to a T,” he said.

“We follow our businesses where they go. One third of the world doesn’t have electricity. That’s not in the U.S. They’re in Africa and Asia and places like that. That is a massive growth opportunity for us.”

Immelt is sensitive to the criticism GE faces for moving its growth into other markets. He’s seen the criticism over tax inversions, in which a company moves its headquarters offshore to take advantage of a lower tax rate.

He says the U.S. tax system needs to be reformed.

“It was [last] done in the 1980s. It’s not contemporary for the way business is done today,” Immelt said.

“I understand why people criticize inversions and GE’s tax rate and other people’s tax rates, but what we need to do is have systemic corporate tax reform.”

It’s not that GE doesn’t see opportunity here at home, particularly in new oil and gas technology. That’s where the potential is in Canada.