The Federal Reserve has hiked its benchmark interest rate known as the federal funds rate by a quarter of a percentage point to a range of between 0.5 and 0.75 per cent. 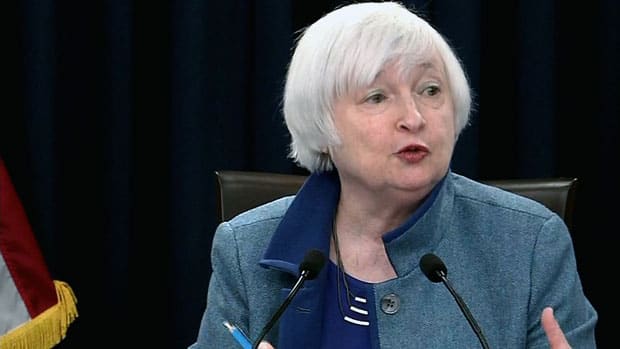 4 years ago
2:14
CBC's Renee Filippone has the latest on the rate hike, and what it could mean for Canadians and our economy 2:14

The U.S. Federal Reserve has increased its benchmark interest rate, known as the federal funds rate, by a quarter of a percentage point to a range of between 0.5 and 0.75 per cent.

The higher rate will affect the what savers and borrowers get on their variable rate products from banks.

The fine print of the bank's policy decision shows that a majority of Fed members expect more rate hikes to come, as many as three in the next 12 months, after previously signalling it was expecting only two.

Three more could be in the offing for 2018, but in its accompanying statement, the Fed makes it clear that hikes won't be a runaway train.

"The committee expects that economic conditions will evolve in a manner that will warrant only gradual increases in the federal funds rate," the Fed said. "The federal funds rate is likely to remain, for some time, below levels that are expected to prevail in the longer run."

The Fed made the widely expected move on Wednesday because virtually all signs from the U.S. economy are showing signs of improvement, yet inflation remains low.

In October, the most recent month for which data is available, the annual U.S. inflation rate was 1.6 per cent, and it hasn't been above the two per cent threshold that the Fed like to see since 2014. So its hiking its rate in an attempt to nudge inflation higher.

"In the most expected policy decision in recent memory, the only real surprise was the move up in the FOMC members' expectations for future policy," TD bank economist James Marple said.

"The move up is a signal that the Fed has become more confident in the economic outlook and that inflation will increasingly track closer to the two per cent target."

Last week, the Bank of Canada opted to keep its benchmark lending rate steady for the 11th consecutive time, at 0.5 per cent.

Canadians will be affected

While the two countries operate independent monetary policies, the Fed's move is likely to have an impact on Canadians, too.

"On the one hand it's good news," associate professor Jean-Paul Lam of the University of Waterloo said in an interview with CBC News. An improving U.S. economy "bodes well for the Canadian economy given that the U.S. is the biggest importer of our products."

Higher rates in the U.S. will push the Canadian dollar lower, which is a double-edged sword: helpful for exporters, but painful for anyone who imports into Canada or Canadians who travel.

"The economy is still very weak in Canada," he said. "In my opinion we won't see an increase in interest rates in Canada probably until the end of the year [and] even that it will depend a lot on the pace of recovery of exports."