Some farmers market vendors push bogus stories to consumers looking for fresh local fruits and veggies — and Marketplace has the hidden camera footage to prove it. 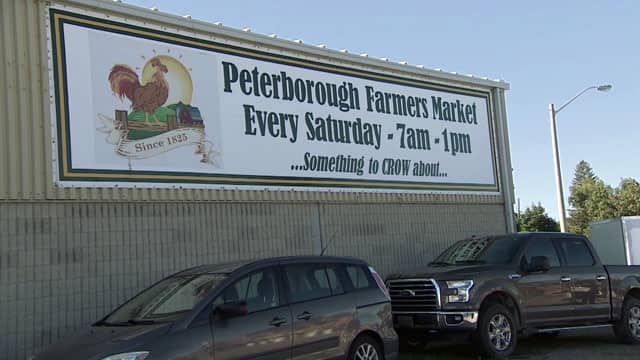 3 years ago
1:07
Hidden camera investigation reveals vendors twisting the truth about where their produce was grown. 1:07

Some farmers market vendors push bogus homegrown stories to consumers looking for fresh local fruits and veggies — and Marketplace has the hidden camera footage to prove it.

The Marketplace team went undercover at 11 bustling markets across Ontario this summer to ask vendors where their produce comes from and then tested the veracity of those claims using surveillance and other investigative techniques.

The results suggest many consumers could be paying premium prices for produce with fake backstories about where it was grown.

At four of the markets, the investigation exposed five different vendors who claimed to be selling fresh produce they had grown themselves but who were actually cashing in by reselling wholesale goods purchased elsewhere.

At a fifth market, the team discovered a vendor passing off Mexican produce as Ontario-grown.

Most of the markets Marketplace visited had vendors known as resellers, who sell produce they didn't grow. They purchase wholesale fruits and vegetables from places such as the Ontario Food Terminal in Toronto — Canada's largest wholesale market — and take it to farmers markets to sell for a profit.

When asked directly, many resellers were upfront about the fact they didn't grow the produce, but others were not.

Lauren Nurse, who farms 6 ½ acres in Stirling, Ont., relies on farmers markets as a source of income. She says this kind of behaviour undermines the industry.

"People are being duped," she says. "There's no difference between food that you buy at the grocery store and food at the farmers market if it all comes from the food terminal."

At the Peterborough Farmers' Market, one of the largest and longest running in Ontario, Marketplace identified two resellers making misleading claims about their products.

The largest of these vendors, Kent Farms, operates two different stalls at the market. One is run by James Kent, and the other by Brent Kent.

They say they're third generation farmers and have properties northeast of Toronto in Newcastle, Orono and Lindsay.

They told undercover Marketplace journalists that most of the produce they were selling was grown on their family farms, or was from neighbouring properties.

Marketplace started digging after noticing the cucumbers Brent Kent claimed to have grown were labelled with stickers from a large multinational corporation that grows greenhouse vegetables 500 kilometres away in Kingsville, Ont., located south of Windsor on the northwestern shore of Lake Erie.

To determine where the Kents were getting the rest of their produce, Marketplace followed a Kent Farms truck the day before the Peterborough market.

Long before dawn, the truck drove 100 kilometres from James Kent's property in Newcastle to the Ontario Food Terminal in Toronto. There, the journalists witnessed James Kent and his employees loading their truck with more than 50 boxes of produce including peppers, zucchinis, strawberries and radishes.

At market the next day, James and Brent Kent were seen unloading boxes that looked to be the same as those from the terminal. Staff at Brent Kent's stall peeled stickers off peppers and James Kent transferred vegetables from wholesale boxes to farm bushels.

When undercover Marketplace journalists asked about the zucchinis, James Kent said: "They're mine." He also claimed the radishes were from his neighbour "across the field."

"He buys all my strawberries," he said. "The last thing I can do is say no to him when he sells me some radishes."

Brent Kent said he grew the peppers that Marketplace filmed having their stickers removed earlier that day.

Both James and Brent Kent declined to be interviewed.

In an emailed statement, James Kent said they "believe in transparency" and are committed to their customers. He said he grows some of what he sells and purchases some Ontario produce at the food terminal because he believes it's a "benefit to consumers to provide products from other regions of Ontario."

Marketplace found four more examples of vendors at markets in Burlington, Gravenhurst, Orillia and Toronto who weren't clear or upfront about what they were selling.

A vendor at the Burlington Mall Farmers' Market southwest of Toronto told undercover Marketplace journalists that the tomatoes he was selling were from his farm, which he said is called Koornneef. But Koornneef Produce is actually a large wholesaler that only sells produce at the Ontario Food Terminal.

At a popular market in downtown Toronto, a vendor displayed a "Homegrown Chemical Free" banner and said all of the products were from his farm. But Marketplace noticed boxes from a wholesale distributor at the food terminal underneath the table. That wholesaler told Marketplace he doesn't market his produce as chemical-free.

In Orillia, located two hours north of Toronto, a pepper that a vendor claimed was local had a sticker from a 750-acre producer in Sinaloa, Mexico.

Farther north in Gravenhurst, a vendor claimed to have personally picked strawberries on his farm the day before market, but Marketplace discovered he doesn't even have a farm.

When the journalists followed up with the owners of each stall, two admitted to reselling at certain points in the season and said the misleading claims were made in error. One refused to respond at all, and the other said he doesn't grow anything and his staff member misspoke.

But it's not just the consumer who's being hurt by reseller lies.

A 2016 study from the Greenbelt Farmers' Market Network, an organization that connects more than 100 farmers markets in southern Ontario's Greenbelt, found small-scale farmers, like Lauren Nurse, are growing increasingly reliant on markets as a source of income.

The study says nearly half of farmers surveyed rely on markets for 75 per cent or more of their income, up from just a quarter of farmers five years earlier.

Nurse says she finds it very frustrating when resellers bring seasonal produce and undercut her on price.

"Our sales drop … It really hits our bottom line."

There are no provincial regulations anywhere in Canada against reselling at farmers markets, so it's left to each individual market to set and enforce its own rules. Some markets prohibit or limit reselling but the majority do not.

It's a different story in some states south of the border.

In California, for example, each stand is inspected and vendors are required to display a certificate that outlines the produce they grow.

No reselling of wholesale or out-of-state produce is permitted and markets are inspected by the state on a quarterly basis.

Vendors who are caught breaking the rules can face suspensions, fines or even jail time.

Ed Williams, the man in charge of inspecting markets in Los Angeles County, says the system is important to prevent fraud and ensure "the consumer is not getting ripped off."

In Canada it falls to the provinces to decide whether to regulate the industry, so Marketplace put its findings to Jeff Leal, Ontario's minister of agriculture and rural affairs.

He says reselling means consumers can access produce on a "four-season" basis that might not be available in Ontario's growing season. However, to "protect the integrity" of markets, he urges vendors to give correct information about the origin of produce.

In addition, he says his ministry will investigate every complaint it receives and work with farmers markets to get them resolved.

But unlike in California, there are no legal consequences for resellers who lie about growing the produce they sell.

So how can consumers guard against being misled?

Nurse says the best way is to learn what's in season and be aware of what fruits and vegetables shouldn't be available locally at a particular time of year.

Another dead giveaway, she says, is discarded wholesale packaging behind a vendor's stall.

She says it's unfair consumers have to go to such lengths to protect themselves.

Luke Denne is an investigative journalist for Marketplace. Originally from the U.K., he's based in Toronto.