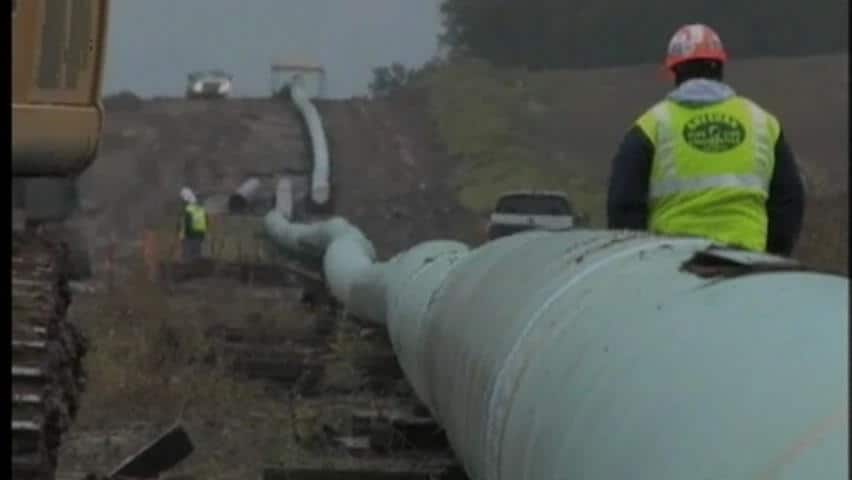 9 years ago
5:53
David Wilkins, former U.S. ambassador to Canada, on how the Keystone XL pipeline delay will affect Canada's relationship with the U.S. 5:53

The U.S. decision to delay approval of the Keystone XL pipeline is a "catastrophic" cop-out by the Obama administration, former U.S. ambassador to Canada David Wilkins said Friday.

Wilkins, who lobbied for the project on behalf of the Canadian oil industry, told CBC's Power & Politics with Evan Solomon that the delay was politics at its worst.

Wilkins was ambassador to Canada during the Republican administration of former president George W. Bush.

Finance Minister Jim Flaherty said Friday that the delay may kill project and could add momentum to efforts to open up the Asian market for Canadian oil.

The U.S. State Department announced the delay Thursday, saying it wanted to look at other possible routes for the $7-billion pipeline, which Calgary-based TransCanada has proposed to carry mostly Canadian crude from the Alberta oilsands to the U.S. Gulf coast.

The department said it wants to consider routes that would bypass the Sandhills, an ecologically sensitive area in Nebraska as well as avoid crossing over the Ogallala aquifer, which supplies drinking water to 1.5 million people in eight states.

"The decision to delay it that long is actually quite a crucial decision," Flaherty told Bloomberg News at the Asia-Pacific Economic Cooperation summit in Honolulu.

"I’m not sure this project would survive that kind of delay."

A new environmental review of the alternative section is expected to take until early 2013.

"It may mean that we may have to move quickly to ensure that we can export our oil to Asia through British Columbia," Flaherty told Bloomberg.

Flaherty was referring to another pipeline, the Northern Gateway project proposed by Calgary-based Enbridge, to carry oilsands crude from near Edmonton through the Rocky Mountains to a terminal at Kitimat, B.C., where it would be loaded aboard tankers.

That too has its opponents, ranging from dozens of First Nations communities along the proposed route and environmentalists who warn of the dangers of an oil spill offshore from the terminal.

The National Energy Board will start public hearings on Gateway in January.

Accelerating could add to cost

But Andrew Leach, an assistant professor at the University of Alberta's School of Business in Edmonton, expressed skepticism that accelerating the approval process for Gateway would be possible or advantageous.

Since how the approval process is to be conducted is already dictated by law, Leach told CBC News, trying to accelerate that "if anything would probably embolden the opposition to the project, and in the long run make it more costly and more difficult."

"You end up with another element to which there would be legal challenges," he said.

Flaherty will visit Beijing and Tokyo from Monday to Thursday. His talks in China will include increasing oil exports to that market.

And Federal Natural Resources Minister Joe Oliver was in China this week to attract investment in Canada’s oil and forest industries.

The delay until after the U.S. election raised the criticism that the Obama administration was simply putting off the decision to avoid the anger of environmental and liberal supporters if he approved the project, and criticism from labour and business groups for thwarting job creation and reduced dependence on Middle Eastern oil if he rejected it.

Republican House Speaker John Boehner said Obama had sacrificed thousands of jobs "solely to appease his liberal base. It's a failure of leadership."

But a State Department official on Thursday denied politics played a role.

"The White House did not have anything to do with this decision," Kerri-Ann Jones, assistant secretary of state for oceans and international environmental and scientific affairs, said in a conference call with journalists.

"They did not direct us to make this decision."

The Keystone XL project came under fire not only in high-profile demonstrations by environmentalists supported by Hollywood celebrities such as Daryl Hannah and Julia Louis-Dreyfus, but also from ranchers and others living along the proposed route in Nebraska.

"I didn't think we'd get this far this quick, to tell you the truth," said fourth-generation Nebraska rancher Bruce Boettcher, 55. "TransCanada is persistent. But when they get persistent, I get persistent."

He called the decision "an exceptional moment for Nebraskans" and a sign their voices have been heard.

TransCanada said in a statement Thursday it remained confident Keystone XL would ultimately be approved.

"If Keystone XL dies," CEO Russ Girling said, "Americans will still wake up the next morning and continue to import 10 million barrels of oil from repressive nations, without the benefit of thousands of jobs and long-term energy security. That would be a tragedy."

With the delay of the Keystone project, Prime Minister Stephen Harper is expected to talk to Obama about Canada's economic relationship with the U.S. when the two meet this weekend in Hawaii for the APEC and North American leaders summits.