Energy East pipeline: What you need to know

Emotions are running high on both sides of the debate when it comes to TransCanada's proposed, 4,600-kilometre Energy East pipeline. Here's why.

Perhaps you've heard of Energy East, but aren't really sure what it is — or why emotions are running so high on both sides of the debate. If so, check out this primer on the important facts of the proposed pipeline.

Energy East is a proposed 4,600-kilometre pipeline by Calgary-based energy corporation TransCanada. It would stretch from Alberta to an export terminal in New Brunswick and could carry up to 1.1 million barrels of crude oil per day.

The pipeline would be built by converting an existing natural gas pipeline to one suited for oil transportation, as well as constructing new sections of pipeline to complete the route.

Where will it run?

The pipeline would begin in Hardisty, Alta., (southeast of Edmonton and about 100 kilometres from the Saskatchewan border), and end at Irving Oil Ltd.'s refinery in Saint John. Along the way, it would run through Saskatchewan, Manitoba, Ontario and Quebec. Montreal and Quebec City are both along the proposed route.

In December, TransCanada filed an amended application with the National Energy Board. The new application makes almost 700 changes to the original proposed route in order to minimize the impact on environmentally sensitive areas.

What is the timeline?

Energy East was first proposed in 2013. If the National Energy Board approves TransCanada's amended proposal, construction is set to start in 2018, with the pipeline up and running by 2020.

What will it cost?

The project was originally estimated to cost $12 billion, but when the amended application was filed, the estimated cost had risen to $15.7 billion, not counting the value of the existing natural gas pipeline that would be incorporated into it.

Why is it controversial?

The Energy East debate basically comes down to the economy versus the environment.

On the one hand, it could be a boon to the economically depressed west, where low oil prices have led to large-scale job losses, as the cross-country pipeline would give Canada's struggling, landlocked oil industry access to world energy markets.

It is also estimated that it would create 2,300 direct and indirect jobs in New Brunswick, which had an 8.9 per cent unemployment rate (higher than the Canadian average of 7.1 per cent) in December 2015.

However, many are concerned about the environmental impact an increased demand for oil could have. The Pembina Institute, an environmental think-tank, released a report in 2014 that found producing the amount of crude needed to fill Energy East might generate an extra 32 million tonnes of greenhouse gases each year.

Municipalities close to the pipeline's proposed route, including aboriginal communities, have expressed concern about the potentially disastrous possibility of a spill.

A lot of the debate has been divided by region, with westerners coming out in favour of the pipeline and Quebecers speaking against it. This has raised concerns that the pipeline debate is a threat to national unity. Interim Conservative leader Rona Ambrose has said it is "creating divisions in the country."

What hurdles has it faced?

One of the biggest problems that TransCanada has encountered so far was opposition to their plan to build an additional oil-export port in Quebec.

In April 2015, under mounting pressure from environmental groups, the company announced that it would not be building a planned port in Cacouna, Que., located on the St. Lawrence River, due to concerns about beluga-whale breeding grounds. The change added two years onto the project's timeline.

At the time, TransCanada said it was looking for another suitable location in Quebec. But in November, the corporation announced it wouldn't be building a port in Quebec at all, which launched a lot of the province's dissatisfaction.

The province's premier, Phillipe Couillard, said at the time: "With a port in the province, it's quite simple to calculate the benefits in terms of infrastructure, jobs. Without it, I'm not saying it's impossible, but it becomes even more complicated."

Who opposes the pipeline?

At a recent news conference, more than 80 mayors in the Greater Montreal area announced their opposition to the pipeline. Coderre spoke on the group's behalf, saying the project "still represents significant environmental threats and too few economic benefits for Greater Montreal."

After meeting with Trudeau on Tuesday, Coderre dialled his opposition back a bit, saying that while TransCanada has more work to do if it wants to garner community support, "at the end of the day, it's all about respect, being responsible and having a balanced approach [between economic growth and sustainable development]." 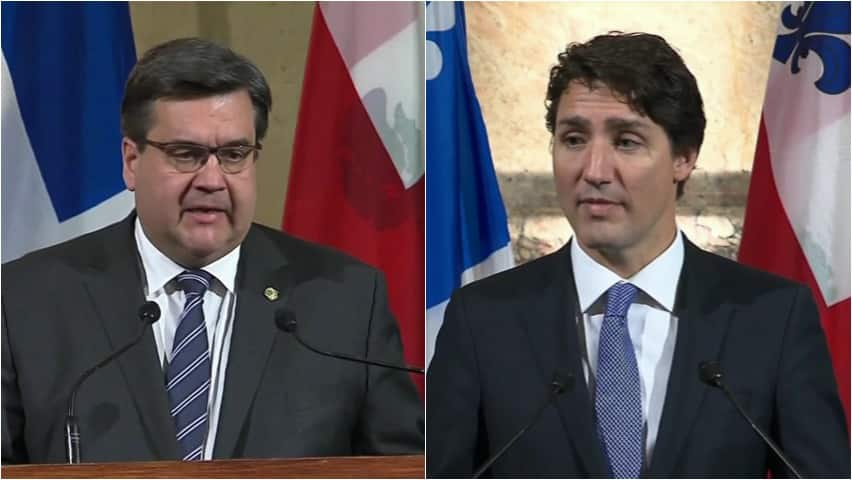 In May 2015, more than 60 organizations, including the David Suzuki Foundation and Greenpeace Canada, signed a letter to the National Energy Board asking that it overhaul its review process and begin evaluating the Energy East project again only when more information had been submitted.

Who supports the pipeline?

Alberta politicians have thrown their weight behind the project, touting the economic benefits.

Calgary Mayor Naheed Nenshi recently said that "Energy East is about energy independence for Canada. It not only allows us to get market access, it allows us to serve Canadian customers with Canadian energy."

Alberta Premier Rachel Notley has also voiced her support for the project. "Tens of billions of dollars in revenues, to be shared among all provinces, are at stake over our access to more markets for our oil," she said.

Ontario Premier Kathleen Wynne has sort of flip-flopped on the issue. She'd expressed concerns about the pipeline in the past, but the Alberta NDP government's climate-change plan, which caps oilsands emissions, has made her more inclined to work with the western province on Energy East. She gave her tentative support to the project at a news conference last week.

"The people of Ontario care a great deal about the national economy and the potential jobs that this proposed pipeline project could create in our province and across the country," she said.

What does Trudeau say?

The prime minister has not come out definitively in favour of or against the Energy East pipeline. Instead, he's criticized the current approval process for pipeline proposals, calling it flawed.

His government is reviewing the environmental assessment rules currently in place for pipeline applications with an eye toward overhauling the process soon.

"My responsibility as prime minister is to make sure that on national projects, we're behaving in a way that both contributes to the economy, to a secure environment, to bringing people together and mostly to creating a better future," Trudeau said Tuesday.