A year-long CBC Marketplace investigation reveals there were 2,198 reported incidents of staff-on-resident abuse in 2016. This means an average of six seniors were abused by their caregiver at a long-term care home every day.

Diana Pepin never expected to capture abuse when she installed a camera in her mother's room in an Ottawa long-term care home. She wanted to keep an eye on her mother and, as a former nurse, monitor the staff's handling of her mother's hygiene. Instead what she captured was these words:

The words were spoken to Pepin's disabled mother, Viola, 86, by the personal support worker (PSW) who had been caring for her for years. Viola cannot move or speak due to a traumatic brain injury, but Pepin says she can understand.

"My mother had to go to sleep, had to go to bed that night, be tucked in by this person … and this is her primary evening caregiver," says Pepin. "This is torture." 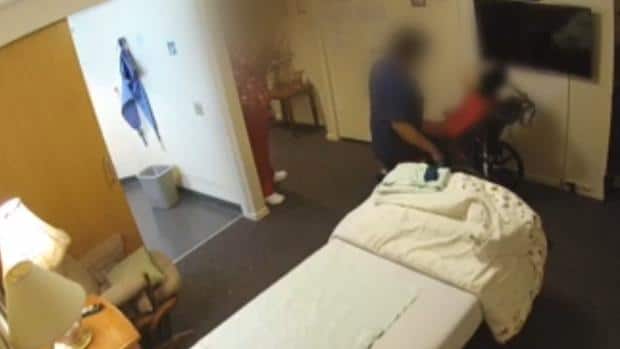 3 years agoVideo
0:37
Diana Pepin put a camera in mother's room at Peter D. Clark nursing home and captured footage of a PSW swearing at her mother. 0:37

The City of Ottawa says the PSW involved in the incident was fired, along with two other staff members who witnessed the abuse and failed to report it.

A year-long CBC Marketplace investigation reveals this case is not isolated.

Marketplace compiled six years of data from Ontario's long-term care facilities, including critical incidents involving abuse and neglect that each home reports to the government. The number of incidents was compared with the number of licensed beds in each home to calculate a rate of abuse.

The investigation reveals that staff-to-resident abuse increased 148 per cent from 2011 to 2016, the most recently available data.

In 2016, there were 2,198 reported incidents of staff-on-resident abuse. This means, on average, that six seniors at long-term care homes in Ontario are abused every day.

Jane Meadus, a lawyer and institutional advocate with the Advocacy Centre for the Elderly says family members come to her with abuse reports all the time.

Every time we'd ask for an explanation from the facility, we would be told that there was no documentation.- Daniel Nassrallah, lawyer

"We hear stories of people being illegally detained, of being left in bed for days, filthy conditions, cockroaches, assault," says Meadus.

Pepin started having concerns about her mother's care at Peter D. Clark Long-Term Care home when she noticed her mother had bed sores and her basins weren't being cleaned.

Daniel Nassrallah is a lawyer who is now representing Pepin in her fight against her mother's long-term care home. Nassrallah had installed a camera in the room of his own 89-year-old grandfather, Georges Karam, at the Garry J. Armstrong Home in Ottawa after he noticed bruises and lesions on his grandfather's body.

"Every time we'd ask for an explanation from the facility, we would be told that there was no documentation, there's no information to elaborate or to clarify or shed light on what occurred," says Nassrallah.

"I'd had enough, the family had had enough, and we said, you know what, you need something to use as an investigative tool and potentially a deterrent to determine what's really going on here," he says.

The camera caught a PSW punching Karam 11 times in the face while he lay in his bed.

The City of Ottawa has developed a "continuous improvement plan" in response to their incidents last year. The plan includes abuse-prevention training, updating residents' care plans, upgrading technology, and the launch of a third-party review of its long-term care services to provide recommendations aimed specifically at preventing incidents of abuse.

The report is expected to be presented to city council by April of this year.

This is part of Marketplace's year-long investigation Crying Out for Care.  If you have a story you want to share, email Marketplace@cbc.ca.