Questions are being raised about whether railways are providing enough training for workers who operate trains. 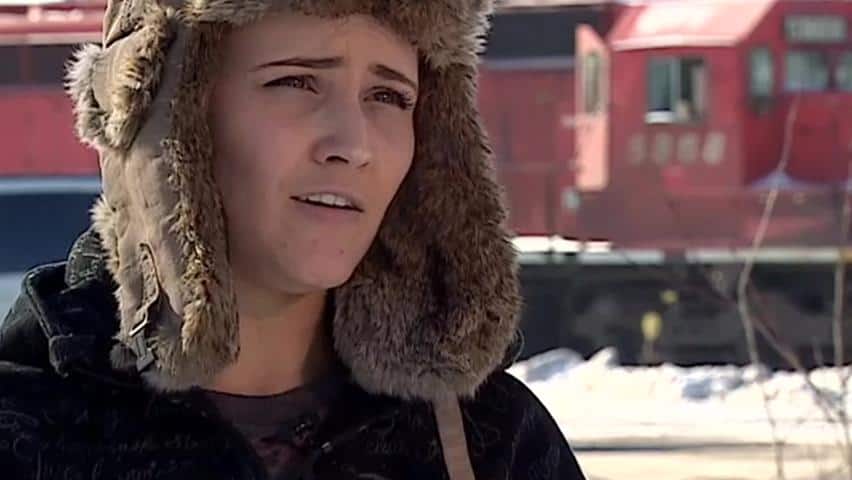 Video: Train conductor remembers the Banff derailment and how she was not prepared to properly react and respond.

6 years agoVideo
1:48
The train conductor involved in the Banff derailment speaks out about her training. 1:48

Stephanie Katelnikoff was operating a train near Banff, Alta., in December, when it derailed. It was her second trip as a conductor for Canadian Pacific Railway, an incident that has raised questions about the training of conductors.

I wasn't thinking. I was in utter shock. Totally ill-prepared to find something like that.— Stephanie Katelnikoff, former conductor

On Dec. 26, 2014, 15 cars carrying grains and fly ash, a material used to make concrete, went off the track west of the tourist town in Banff National Park.

"I wasn't thinking, I was in utter shock. Totally ill-prepared to find something like that," says Katelnikoff. "It put me in a bit of a panic because it was only my second trip and I was already just anxious to be on the train by myself, let alone deal with a derailment."

Canadian Pacific says training usually takes about six months, but documents show Katelnikoff was working alone as a qualified conductor less than five months after she was hired.

Katelnikoff was hired by CP in late July and entered the company's training program. Katelnikoff says she received four weeks of classroom training, before 13 weeks of on the job training. She says that included six weeks in the rail yard and seven weeks on trains travelling from Calgary to both Red Deer and Field, B.C.

"Even just a few extra weeks would have been beneficial," says Katelnikoff. "I felt anxious to be out by myself, after what training I had. I did not feel like I was adequately trained. I felt like I was rushed through the training."

She says she was promised first aid training, but never received any.

Katelnikoff claims CP dismissed her because of the derailment. The Transportation Safety Board has not yet released the results of its investigation.

CP initially refused to comment on Katelnikoff, even after she agreed to waive her privacy rights. In a statement late Monday afternoon, CP spokesman Jeremy Berry said that Katelnikoff was let go for a number of reasons.

"Ms. Katelnikoff was not dismissed for one single issue, she was dismissed because of a number of events over her six-month probationary period."

CP also said that Katelnikoff was not alone on the train, but working with an experienced engineer.

However, the conductor is the crew member responsible for operation of the train.

Railways are in charge of training and qualifying their own workers to operate trains. The companies create their own training programs and administer their own tests.

If you mishandle that locomotive ... you could have catastrophic effects with that train.— Railroader Rick Rutledge

There are significant safety concerns regarding ill-prepared workers, since the trains haul products such as chemicals, fertilizer, oil and other hazardous materials throughout the country.

"When you are running that train, if you mishandle that locomotive, if you mishandle the air-brake system, you could have catastrophic effects with that train," says Rick Rutledge, a former railroader with 30 years of experience. "I have seen conductors that have only a couple years' experience that have gone into training to be an instructor, and that, in my view, is not quite enough experience to be doing that."

"You should be with somebody considerably longer to start to get the craft, because you are dealing with a very unforgiving environment," says Rutledge. "You are dealing with rolling steel and it only takes one mistake and that person can lose a limb or worse."

Rutledge says railroads likely want to reduce the amount of training to save time and money.

"With the railroads, its either feast or famine. When they are busy, they need people and they need them now. So they put them through the training program, and they try to get them out on a train as quickly as they can to serve the customer. But you run the risk of them not having the experience they need and you start to cut corners."

Rutledge is concerned about the quality of training offered by railways and whether that will lead to another railway disaster on the scale of Lac-Mégantic. Part of the problem, he says, is a lack of oversight by federal regulators. During his time at CN, he says, only once did an inspector come aboard his train.

"They didn't even ask to see my ticket or see if I was qualified to run. So I think the federal government has to step up, and not just check a box, but start looking at what these railroads are doing instead of letting them police themselves all the time."

The Banff derailment was Katelnikoff's last trip with CP. She worked a few days at the rail yard in Calgary before she was fired. She was still on probation.

In Banff, after she had left the locomotive to see the derailment, she breathed in fly ash dust. A doctor ordered her not to return to work, until the pain in her lungs subsided.

Fly ash can cause respiratory tract irritation and skin burns.

The letter CP gave to Katelnikoff lists several reasons for her firing, all of which Katelnikoff disputes.

One of the rules she broke was speaking to the media. Katelnikoff contacted a newspaper photographer to see if she could acquire a picture of the derailment.

Katelnikoff plans to file a grievance through her union for wrongful dismissal.

CP declined CBC's interview requests. In a statement, the railway says it has a vigorous training program for all new hires that includes classroom, hands-on learning, on-the-job training, and several exams. CP also says it meets all related federal regulations.

The Railway Association of Canada said it does not see any problems with the current training programs for conductors or locomotive engineers.

"In your job, you are qualified and do your job, but you feel you should know more. It doesn't mean you are not qualified for your job. You might have a personal perception, that you would need additional training, but the minimum standards for your position are determined by the railways."

In a statement, Transport Canada says railway companies are responsible for establishing employee training programs for locomotive engineers. Transport Canada monitors the railways for compliance with regulations and takes appropriate action, as needed, it says.