Transport Canada has hit Canadian Pacific Railway with an unprecedented order demanding the company change working conditions on some B.C. runs because they are causing "excessive fatigue" among train crews and pose "an immediate threat to safe railway operations." 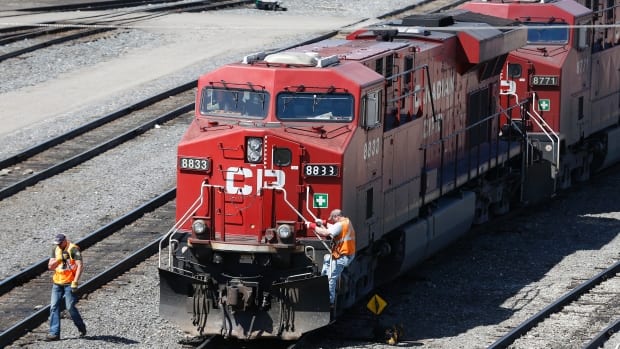 Transport Canada has hit Canadian Pacific Railway with an unprecedented order demanding the company change its freight train line-ups and fatigue-management practices on some runs in British Columbia because they pose "an immediate threat to safe railway operations."

The situation "creates excessive fatigue ... at locations on CP within British Columbia, including but not limited to Roberts Bank, Coquitlam and Kamloops," Horie writes.

The Transport Canada order requires CP to remedy the situation immediately by:

While Canada's freight rail industry has been experiencing a downturn in recent months, the general trend has been toward longer trains and greater volume of goods to keep up with the growing just-in-time delivery demands.

The review of working conditions was prompted by complaints from "multiple crew members" working so-called extended service runs between Kamloops and the Greater Vancouver Area.

Although the Transport Canada order is specific to that stretch of CP's operations, similar complaints about problems related to employee exhaustion and scheduling have been documented for years. However, the order marks the first enforcement action by Canada's rail regulator to declare such an "imminent threat," CBC's investigation has found.

"CP will immediately comply with the terms of the order but will consider all options and the possibility of work scheduling as it relates to this matter," CP's assistant vice-president of communications, Martin Cej, told CBC news in an emailed statement Friday.

CP has been taking steps to ensure crew members take more rest, but union collective agreements have been a barrier to change.- Martin Cej, CP spokesman

In a follow-up statement Monday, CP spokesman Martin Cej said, "Crews are not on call 24/7. Crews have significant and often unutilized opportunities to schedule rest.

"CP has been taking steps to ensure crew members take more rest, but union collective agreements have been a barrier to change."

'Your brain is mush'

A number of locomotive engineers have told CBC News that changes to staffing levels and CP scheduling practices are taking their toll and leaving train crews increasingly exhausted.

Ten years ago, the company cared, but now, everybody is just concerned about money.- CP engineer

"Ten years ago, the company cared, but now, everybody is just concerned about money," one CP engineer from Western Canada told CBC News, asking to remain anonymous for fear of being fired.

He said a combination of longer trains, unpredictable schedules and the elimination of the taxis and vans that used to shuttle replacement crews back and forth between terminals are forcing employees to spend longer hours stuck at "away-from-home terminals."

"Our internal clocks are screwed," he said, describing a growing loss of control over when employees work and when they sleep.

He said a routine scenario could see him driving a train from his home community to another location between the hours of midnight and 6 a.m. but then having to wait 12 to 24 hours not knowing when he'll be assigned to drive a train back home.

"You get into your away- from-home terminal, say, at 6 a.m. in the morning. Then you go to bed, and you sleep until two o'clock in the afternoon. You get up. You're wondering when you're going to go back to work, And you look on your screen, and it's showing you not out of your away-from-home terminal now until midnight!" he said.

That means he'll be awake for 10 hours before reporting for his next eight-hour shift, leaving him tired and, at times, nodding off at the train controls.

"You're fatigued," he said. "You're done. Your brain is mush. You want to go to sleep. You're fighting constantly with your body. Your body is telling you one thing, but you know that on the other hand, you've got to get that train home … 150 miles of track."

CP Rail has declined to answer questions about its fatigue-management policies. The company has offered to meet with CBC News but has been unable to arrange an interview time because it is in the midst of merger talks with Norfolk Southern Corp.

Officials found 11 deficiencies and have since instructed CP to adopt "corrective action plans" to fix those problems.

About 25 per cent of all of  CP's  train crews have no predictable schedules and are on-call 24/7.- Government source

However, Transport Canada blacked out large portions of the audit report, which was obtained by CBC News through access to information laws, citing protection of commercial interests.

The department has refused to disclose what the problems were or whether they have been fixed.

Sources familiar with the audit tell CBC that CP's fatigue management practices "are not very robust and lack scientific rigor" — unlike in the airline industry, which has adopted much stricter, more predictable scheduling for employees.

"The rail industry as a whole is not very receptive to this," one government source told CBC News. "They are digging their heels in and sticking their heads in the sand. About 25 per cent of all of CP's train crews have no predictable schedules and are on-call 24/7."

Transport Canada hired a U.S. expert in 2012 to review CP's formal fatigue management plan, which has to be filed with the government.

Patrick Sherry, executive director of the National Centre for Intermodal Transportation at the University of Denver, concluded the plan was too vague.

In an interview with CBC News, Sherry said Canadian transportation regulators are leading the way in developing models for fatigue management but that the laws to enforce the rules need more teeth.

There's a lot of evidence that shows that fatigue, if not properly managed, puts a serious and severe risk for creating operational errors.- Patrick Sherry, transportation safety expert

For example, the only fatigue management plan that CP has ever submitted was the one Sherry identified as lacking, which was filed with the government in 2011 and has not been updated since.

"There's a lot of evidence that shows that fatigue, if not properly managed, puts a serious and severe risk for creating operational errors," Sherry said.

"Air traffic controllers, ship's captains, pilots, train drivers, military personnel all have the opportunity to work in a 24/7 environment. We know that if you exceed or if you're up beyond 18, 19 hours, your cognitive efficiency decreases dramatically."

One CP engineer who told CBC that in late 2015, he was on-call or at work every single day for a month said he hopes the new Liberal government will step in and order changes to how CP and CN schedule employees.

"They just better look at this seriously and give Transport Canada the power they require and need to regulate these two railways properly — not [have] the railways telling them what to do," he said.