Transport Canada is alleging three CP Rail supervisors - not the train crew - are responsible for leaving 57 rail cars parked on a mountain slope without proper handbrakes earlier this year near Revelstoke, B.C., contrary to a ministerial directive. 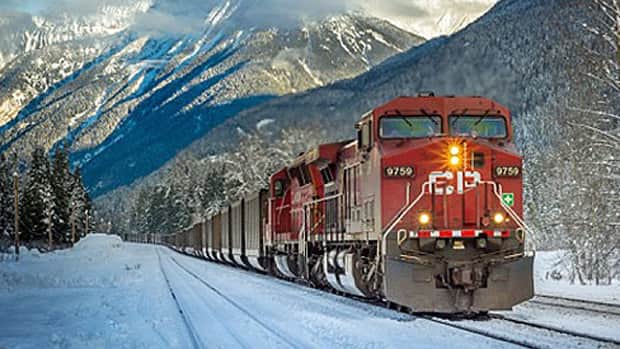 5 years agoVideo
1:53
CP Rail raided by Transport Canada a 2nd time over train left with no handbrakes on a hill above Revelstoke, B.C. 1:53

Two of the parked cars contained dangerous goods, investigators say they were told.

In their investigation of the incident, federal safety investigators raided CP Rail's Calgary headquarters in early November, for a second time this year, CBC News has learned.

In the search warrant for the raid, Transport Canada alleges that the company and three supervisors violated emergency rules intended to prevent runaway trains and derailments brought in after the Lac Megantic tragedy in July 2013 involving the now defunct Montreal Maine and Atlantic Railway.

In the Lac Megantic crash there were too few handbrakes applied, which allowed the locomotives and tanker cars filled with crude oil to roll downhill, eventually derailing, exploding and killing 47 people.

The B.C. incident involves allegations that CP Rail ignored those emergency rules during the night of Feb. 14-15 as it faced a nationwide strike by locomotive engineers and conductors.

CP workers were set to walk off the job at midnight in a strike and company managers were directing crews to park their trains and "tie down" their cargo.

Train 401 was descending CP Rail's "Mountain subdivision" approaching Revelstoke when the conductor said she was ordered to leave the rail cars on a grade above the town and not to take extra time to apply hand brakes, as per the minister's emergency directive.

CBC first reported on the case last spring after learning Transport Canada had begun an investigation and searched CP's Calgary headquarters in May.

During the first raid, investigators seized audio recordings of radio and telephone calls from the night in question between the train crew and the "rail traffic control centre" in Calgary.

After listening to those calls, rail safety investigators have expanded their investigation.

According to the warrant papers filed in court, investigators listened to the audio recordings and now believe the train crew was ordered to ignore the rules by three CP Rail supervisors: superintendent Mark Jackson and two unidentified employees working in the control centre

None of the allegations in the warrants has been tested in court. And CP Rail refused to identify the supervisors when asked by CBC News.

"CP continues to co-operate fully with investigators. As this is an ongoing investigation, we have no further comment," CP's vice-president of public affairs Martin Cej told CBC in an emailed statement.

CP Superintendent Mark Jackson did not respond to requests for comment. When reached last spring by telephone, Jackson told CBC: "At the time, based on the info that was provided, it was going to be a safe move. I know myself I've been cleared of any wrongdoing in this."

CBC News has also learned that in September rail inspectors visited the site of the alleged incident at Greely Sideroad, several kilometres uphill from Revelstoke.

Using a Hy-Rail truck they performed tests and took track measurements to calculate the distances, speeds and potential risk had Train 401 rolled downhill.

Fortunately, the train remained in place without incident, and was later picked up and moved by CP managers. But because of the potential for a runaway above the community of Revelstoke the incident has sparked a major investigation.

"They're the only means of securing a train if the air leaks off," rail braking expert Steve Callaghan told CBC News. "You are always at risk of collision, or accident, or derailment if the cars begin to move."

Callaghan is expected to be a witness for the prosecution in the Lac Megantic case. He won't discuss that case but says the Revelstoke incident deserves thorough investigation.

"They are taking it seriously because you are dealing here with a ministerial directive which applies to every railroad," Callaghan said. "It was literally to prevent runaways from occurring. That's the whole gist of it."

Appearing on CBC's Power and Politics Raitt spoke forcefully about prosecuting the railway and even its executives, as has been done in the Lac Megantic case, if CP is found to have ignored her emergency directive.

Harrison lashed back, accusing Raitt of making threats and accusations when "the facts have not yet been established."

"To suggest that there is any parallel between these allegations and the tragedy of Lac-Mégantic is, at best, unfortunate," Harrison said in a statement issued June 23, 2015.

Transport Canada won't discuss their investigation, and the regulator has not laid any charges.

Penalties for violating an emergency directive under Canada's Railway Safety Act include fines of up to $1 million against a company and up to six months in jail for individuals.

Please send tips on this story to dave.seglins@cbc.ca.