A group of vehicle owners is going after two major automakers in a proposed class-action lawsuit, claiming they were knowingly sold defective vehicles then left to pay for losses and repairs out of pocket when the engines failed or caught fire.

A group of vehicle owners is going after two major automakers in a proposed class-action lawsuit, claiming they were knowingly sold defective vehicles then left to pay for losses and repairs when the engines failed or caught fire.

In a lawsuit filed this week, Hyundai and Kia are accused of intentionally concealing the defect from buyers of vehicles with Theta, Nu, and Gamma engines.

"When complaints came ... [owners] were told 'gosh we haven't heard of that happening. Isn't that weird?' And in fact the companies knew they had a big problem," Regina lawyer Tony Merchant, who is heading up the lawsuit, told Go Public.

The class action was filed in Court of Queen's Bench in Regina on Monday, but has yet to be certified by the court. It names Hyundai Auto Canada, Kia Canada and their American counterparts — Hyundai Motors America and Kia Motors America.

None of the allegations in the lawsuit have been proven in court.

'They can't fix the problem'

A Go Public investigation revealed concerns about Hyundai and Kia engines failing at high speeds or spontaneously bursting into flames — putting some drivers and their passengers into life-threatening situations and leaving others with thousands in repair bills.

Consumer and safety advocates have criticized the South Korean automakers for taking too long to issue recalls of too few models with the Theta-family engines. The recalls started in 2015 and are still rolling out.

"Their difficulty is that they can't fix the problem. They don't know what to do about the problem. So a recall where there's no fix is really no recall at all," Merchant said.

Go Public asked Hyundai if it had a fix for the engine problems, but it didn't respond to that question directly.

Merchant says the proposed class-action suit involves 37 Hyundai and Kia owners, and seven different models ranging in years from 2011-16 — but he expects the number of drivers and vehicles involved to grow once word gets out about the lawsuit.

The legal action is also looking for compensation for owners with the problematic engines who haven't had failures or fires, but are facing a loss in vehicle value.

"For the vast majority of people, they're not going to have a safety problem. And many of them are going to be compelled to continue to operate these vehicles because they can't afford the hit of getting rid of them. So they're entitled to financial compensation that flows from having a vehicle that's significantly depreciated," Merchant says.

Hyundai Auto Canada, Kia Canada and Kia Motors America all told Go Public they do not comment on any current or pending litigation.

"Nothing is more important than the safety and security of Hyundai customers," spokesperson Michael Stewart wrote in an email.

"Hyundai actively monitors and evaluates potential safety concerns, including non-collision engine fires, with all of our vehicles and acts swiftly to recall any vehicles with safety-related defects … Hyundai quality and safety is among the best in the industry."

'They wanted nothing to do with us'

Go Public continues to get complaints from Hyundai and Kia owners, who say they are interested in joining a class-action suit if it means the automakers would have to take responsibility.

The couple's 2018 Hyundai Santa Fe caught fire while it was parked in their driveway last March. They bought it six months earlier and paid more than $50,000 for the SUV. 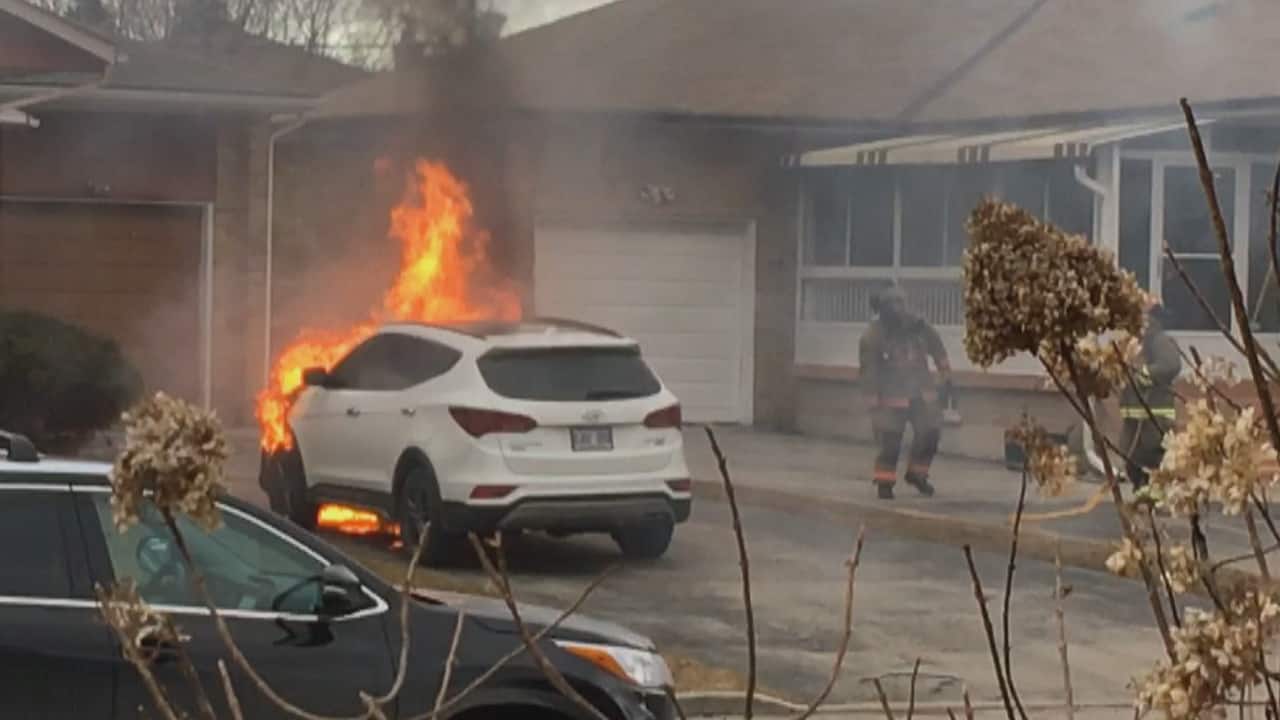 2 years agoVideo
1:20
Video submitted by Marnie Nelson. Her car's engine caught fire while sitting in the driveway in March 2018. 1:20

They contacted Hyundai's head office by email to report the fire and ask for a refund on the extended warranties they had purchased, but say no one followed up to investigate. Instead, the couple says most of their messages to head office were ignored and the local dealership was only interested in getting them to buy a new vehicle.

"As soon as they [the dealership] found out we weren't going to come back in and buy another car, we were persona non grata, they wanted nothing to do with us. No return calls — nothing," Adam said.

"They should be standing behind their products better," Marnie told Go Public.

The dealership declined to respond to Go Public's questions about the couple's situation directly, referring us to head office.

Hyundai says its records show the Nelsons went directly to their insurance company to report the fire and only reached out to the company for a refund on an extended warranty they had purchased for the vehicle. The couple says they received a partial refund.

The company wrote in an email to Go Public that its policy is to investigate every case of a fire, "that we are aware of and requested to investigate to determine if the cause is attributed to neglect, abuse, environment or the product itself."

The Nelsons say their fire was never investigated by the company. The company did reach out to the couple after Go Public inquiries.

Thousands out of pocket

The engine in Daniel Roukema's 2013 Hyundai Santa Fe didn't burn — it died in 2016 while he was driving on a highway near Toronto.

He says he had to pay about $9,000 to replace it. When he asked the company to cover the cost, Roukema says it refused and blamed his lack of upkeep for the engine failure, which he denies.

Two recalls were issued for the vehicle after he paid to replace his engine.

"I think the way they've handled the situation is absolutely abhorrent … we [owners] ought to be compensated," he said.

Hyundai did not respond to specific questions about Roukema's case, but said "if a customer previously paid for repairs in advance of a recall being issued, and it is determined that the repairs required were a result of a recall, Hyundai will reimburse the customer for the recall-specific repairs to their vehicle."

Hyundai says it will soon launch what it calls a microsite that aims to answer questions for customers affected by recalls.

In Quebec, the Automobile Protection Association and a group of Kia owners are suing Kia for compensation for alleged engine problems with the 2010-15 Kia Forte. Fires are not part of that class-action lawsuit.

Transport Canada has been investigating engine issues in Hyundai and Kia vehicles since September. The transportation authority is asking owners who have had problems to contact the department.

We want to hear from people across the country with stories you want to make public.

Submit your story ideas to gopublic@cbc.ca.

With files from Ana Komnenic