Pot pancakes? Cooking with cannabis and what could be on Canada's menu

Medical marijuana businesses are hungry to tap into the lucrative pot-infused food market. Canada's laws don't allow for the sale of edibles yet, but some anticipate that could change with the expected legalization of marijuana next year.

Cannabis food products aren't for sale yet, but entrepreneurs already preparing for legalization of edibles 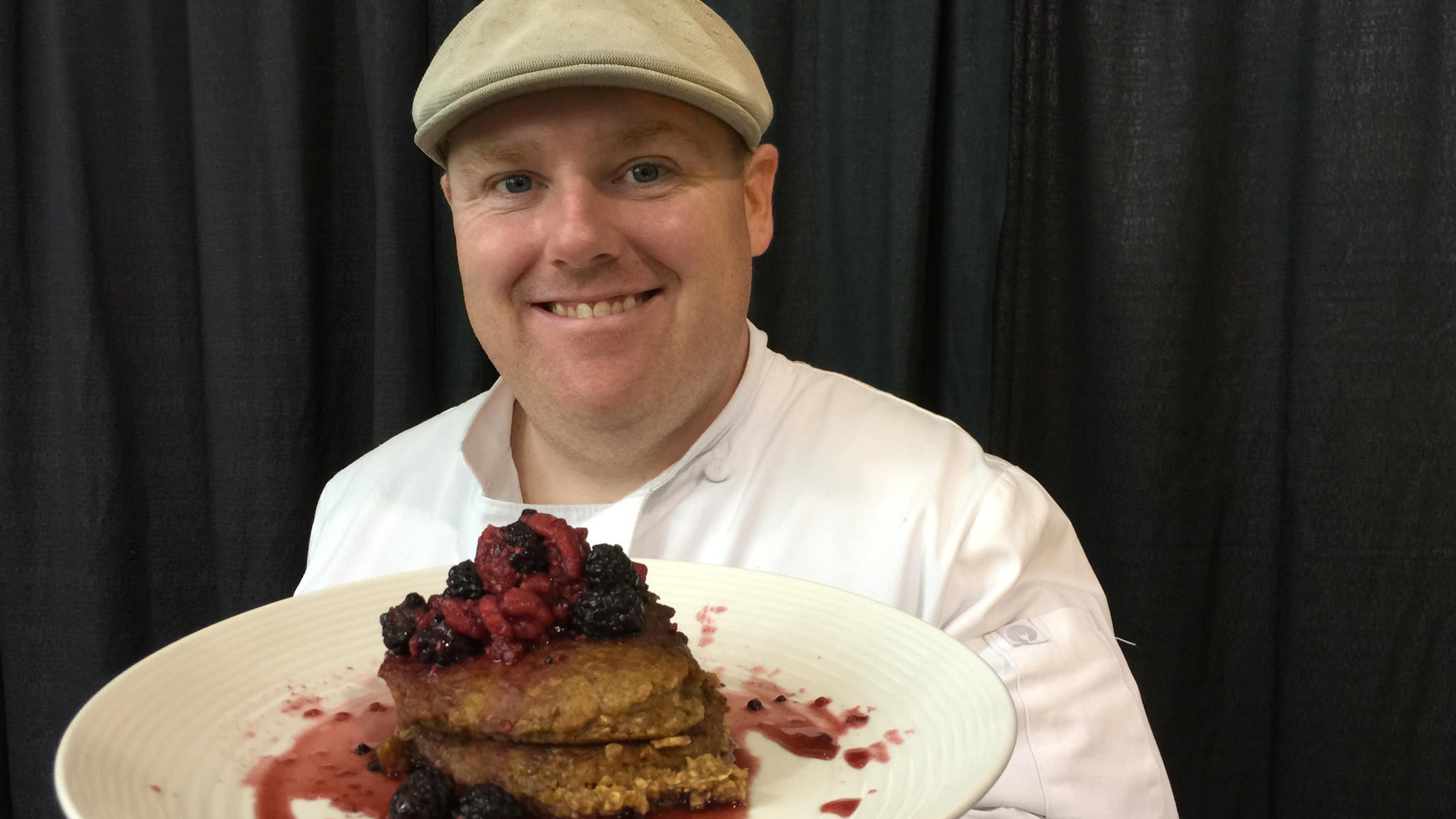 Chef Cody Lindsay whips pancake batter while an intrigued crowd watches. He adds whole wheat flour and oats to give the mixture a healthy boost.

"It's just small improvements to your diet that will help you feel better," he tells the audience at a recent cooking demonstration in Toronto.

Then comes the final ingredient — one not typically found in pancakes — a few doses of cannabis oil.

"Now, we know that each pancake is going to have a least one millilitre of THC," Lindsay says.

Canada doesn't allow the sale of marijuana food products, even for medical use, but individuals who have a prescription for medical marijuana can cook with cannabis at home. And some businesses hope the day will come when they can tap into the lucrative pot edibles market.

Lindsay, a 32-year-old Canadian war veteran, uses medical marijuana to treat anxiety he developed during a rough tour in Afghanistan.

Also a trained chef, he says he wants to help other medical marijuana users, especially fellow veterans, cook with cannabis in nutritional ways.

"To go one step further and incorporate it into their diet within healthy foods, it's just an added bonus," said Lindsay. "You know, cannabis and salad do mix."

He would like to sell some of his cannabis creations, perhaps even open a marijuana-themed restaurant. But for now, Lindsay sticks to selling his new cannabis cookbook, which features healthy recipes for everything from salad dressings to smoothies to risotto.

No edible sales — for now

Recently, the Supreme Court of Canada ruled that medical marijuana users were not limited to smoking the dried plant and could consume pot.

Some companies expect that in time, they will be allowed to sell cannabis food items as well.

Already, Victoria city council is exploring a medical marijuana business bylaw that would permit the sale of edible pot products.

The expected legalization of marijuana in Canada next year could also expand the edibles market to recreational users.

In U.S. states like Colorado, where marijuana is legal, the edibles business is booming.

Lindsay says eating cannabis is preferable to inhaling it for non-smokers and those craving a more steady high.

"You can feel it throughout your system, but it's not giving you a heavy head high, where in 45 minutes, you'll feel burned out," he said.

If the edibles market opens up in Canada, Lindsay plans to keep his business small, but others have big ambitions.

Another licensed medical marijuana producer, Tweed, has its sights set on candy.

Tweed, which manufactures dried cannabis and oils, has set up shop in the vacated Hershey's chocolate factory in Smith Falls, Ont.

The space is perfect for manufacturing a line of pot-infused chocolates, said Zekulin.

"A lot of the equipment is, in fact, still here," he said.

"As you look ahead to a non-medical market, you could see it sitting beside alcohol in the [liquour store]," he said.

But for now, Zekulin must settle for selling just the cannabis oil and letting customers do the baking themselves — although his company does sell muffin and cupcake mixes.

There are two varieties: gluten-free vanilla and chocolate, and Tweed also has plans for a granola bar mix.

"We tried to pick easy recipes that call for 100 millilitres of oil. If you make 25 mini cupcakes, you can roughly figure out the dose that you have," explains Zekulin.

Plenty to chew on

Dosing is one of the big concerns with the edibles market. In some U.S. states where pot is legal, there have been reports of increased visits to hospitals because of inexperienced users ingesting too much of the drug — often in the form of tasty treats.

Another concern is that the treats will attract children.

Health Canada told CBC News it currently doesn't allow the sale of medical cannabis in food because edible products, brownies and candy in particular, can appeal to young people.

In Colorado, concerns have led to new rules for edibles, including child-proof packaging and improved labels that list ingredients and dosing information.

"They're open to exploring more, but they really need to understand the data, the risks, how it would work," he said.

Getting a head start

The Toronto-based business is currently building a 11,000-square-foot factory in the state that will churn out the treats with small, controlled doses of pot, says CEO David Posner.

"We only went to the States because it wasn't legal to do it here," he said.

"We wanted to at least get a jump start on what we think is going to be the most profitable and interesting part of the whole industry."

But for now, that part of the industry is relegated to cannabis oil and cookbooks in Canada.

That's fine for chef Lindsay. His main mission is to educate patients how to make their own meals.

At his cooking demo, he's now moved on to a chicken pesto sandwich, topped off with cannabis oil.

"If you're going to be taking cannabis in a non-smokable form, eating it is the next best way to go," he tells his audience.

And in Canada, the best way to do that for now is to cook with it yourself.