Canada has a long history of exporting military equipment around the world, but keeping tabs on the size and scope of the arms industry proves surprisingly difficult.

'It's life and death ... there has to be more transparency,' says arms trade monitor

Long-range rifles. Armoured vehicles that work on the battlefield or in the streets. Technology for bomb guidance systems. These are just a few of the things that Canada makes, and makes well.

This country has a long history of exporting military equipment around the world, but keeping tabs on the size and scope of the arms industry proves surprisingly difficult.

"Nobody really knows what the true value of Canadian arms exports really is," says Kenneth Epps, a policy adviser at the Ploughshares Project, a Waterloo, Ont.-based NGO that monitors Canada's military industry.

"There is really no way to get a complete picture of specifically what kinds of weapons and other equipment is being produced, and where it is potentially going and where it can end up."

On Monday, CBC News reported that advanced sniper rifles manufactured by a Winnipeg company, PGW Defence Technologies, have possibly fallen into the hands of Houthi rebels in Yemen. The Houthis are fighting a bloody civil war against forces backed by Saudi Arabia.

The company said only that it follows Canadian export rules. The high-calibre rifles were likely legally exported to Saudi Arabia, where they are used by ground troops. After the U.S., the Saudi kingdom is the largest buyer of Canadian-made armaments and technology.

It can be very difficult to decipher what has been transferred and to whom.– Hilary Homes, Amnesty International Canada

It was still a surprise to see the guns proudly displayed in social media posts by Houthi fighters. Those who closely monitor the Canadian arms trade say it lacks transparency, making forceful oversight nearly impossible.

"Of course military goods can be used to protect people, but they can also cause of a lot of damage. It's life and death. Considering the consequences, there has to be more transparency," says Hilary Homes of Amnesty International Canada.

It's not clear how many companies in Canada are currently making and exporting arms and military equipment. The Canadian Association of Defence and Security Industries, for example, represents over 1,000 companies, but membership is voluntary.

The Small Arms Survey, based in Geneva, consistently ranks Canada among the top 15 exporters of pistols, rifles and light machine guns. 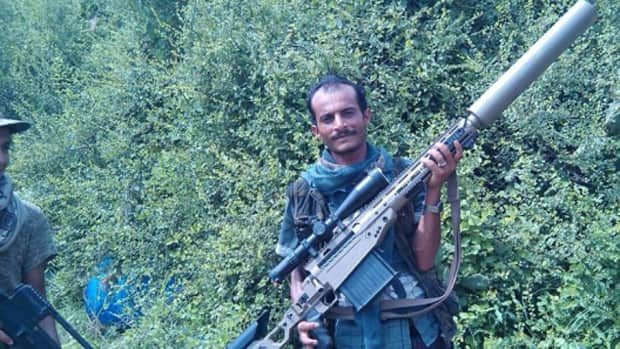 5 years ago
2:52
Discovery of Winnipeg-made weapons raises fresh concerns about military exports to Saudi Arabia according to arms experts 2:52

It's difficult, however, to go beyond generalities about the trade. Specific data is often simply not available, says Epps.

Export data, for example, is complicated by vague categories like "ammunition and fuse-setting devices, and specially designed components" or simply "technology."

"It can be very difficult to decipher what has been transferred and to whom," says Homes.

The most comprehensive figures available from Global Affairs show that Canada had a banner year in 2012, exporting more than $1 billion in "military goods and technology." That number dropped to about $680 million in 2013. The next report is due sometime this year.

But the data in those reports does not include things shipped to the U.S. — which account for well over half of Canada's military exports — because the export rules are different due to a post-Second World War trade agreement.

And that's where things get really tricky, according to Epps. Most of what Canada produces is not guns or ordnance, but component parts of larger weapons systems, both hardware and software.

When the government grants an export permit for military equipment, it assumes that the country listed on the application will be where the component part is eventually used. In reality, it can be incorporated into a larger weapons system and exported again.

"This is a significant loophole that basically undercuts Canada's ability to know where its military equipment ends up," says Epps. "We've documented many instances when, if a company had applied to export directly to a particular country, it would have been denied.

"An obvious example is Pakistan. Canada has not exported military goods to Pakistan since it tested a nuclear weapon in the 1990s, yet, Canadian components end up there in weapons systems built in the U.S."

Ploughshares estimates that the Canadian industry likely exports arms worth between $2 billion and $3 billion per year when the U.S. is included. Another $2 billion to $3 billion worth of goods is ordered by the Department of National Defence for domestic use. The wide range is indicative of just how murky the industry remains, Epps says.

Another area of contention is how export permits are granted or denied, which is based on secretive risk assessments carried out by the government.

"It's not actually clear how the risk assessments are done. We have assurances they are done to a high standard, but nobody knows the actual criteria," says Homes

The $15-billion deal to sell light armoured vehicles (LAVs) manufactured by General Dynamics in London, Ont., to Saudi Arabia — which has a dismal human rights record — exemplifies what Homes calls a "puzzling" process.

The deal was brokered by the previous Conservative government. In the years after the war in Afghanistan, it made an open effort to diversify Canada's arms customers, often pointing to job creation at home as reason to expand the arms sector.

The current Liberal government has no plans to revisit the controversial Saudi deal.

Change could be on the way, though. The Liberals have committed to signing the United Nation's Arms Trade Treaty (ATT). Canada is the only remaining NATO-member country not to have signed the agreement, which requires nations to produce detailed annual reports on arms exports and lays out specific criteria for risk assessments.

Epp says it would finally cast light on the true extent of the industry in Canada.

"With a commitment to ATT, the ground is finally set for Canada to pull its socks up on transparency."

With files from Nahlah Ayed, Holly Moore and Jacques Marcoux