Boeing insists fix to 737 Max software will 'get it right,' but flights are likely still months off

It's the height of the summer travel season, and if the country's major airports are anything to go by, commercial flights are humming along at a brisk clip, but there's not a 737 Max jet in sight — and likely won't be for months.

It's the height of the summer travel season, and if the country's major airports are anything to go by, commercial flights are humming along at a brisk clip, but there's not a 737 Max jet in sight — and likely won't be for months.

Boeing's bestselling plane, which was grounded last March after two 737 Max jets crashed, killing 346 people, including 18 Canadians and at least four permanent residents of Canada, likely won't be back in operation until December or January 2020, industry watchers predict.

That doesn't mean that Boeing has stopped making the planes. And even as investigations and hearings into the cause of the air disasters are taking place, including one held Wednesday by U.S. lawmakers in Washington, the company is still producing about 42 Max jets a month.

Analysts predict it could have around 350 in inventory by year's end.

There is a huge need for the planes, said Karl Moore, an associate professor at the Desautels Faculty of Management at McGill University who studies corporate strategy and organization and has advised several major airlines, including Air Canada.

"There's growth in airlines around the world, and that's the forecast for a number of years and an overall larger demand from travel," he said.

As of June of this year, passenger traffic was up five per cent from the previous year, and the commercial airline industry showed a net profit of $28 billion US, according to the International Air Transport Association (IATA).

"With the exception of Southwest Airlines, every Max operator is flying more this summer than it did before," said Colorado-based aviation analyst Mike Boyd.

Whether Boeing will be able to meet the needs of airlines remains an open question.

The company is in the process of testing an update to the software that caused an automated feature known as the Maneuvering Characteristics Augmentation System, or MCAS, to push the nose of the jet down when it detected an erroneous sensor reading. When pilots on two separate flights — Lion Air Flight 610 in October 2018 and Ethiopian Airlines Flight 302 in March — couldn't override it, the planes crashed.

The Federal Aviation Administration, which is the U.S. agency that has to recertify the plane and clear it for flight, also recently asked the company to correct another problem with the flight-control system, which has pushed the ungrounding of the 375 planes airlines around the world took out of circulation further off than the summer or fall date some were expecting.

Civil aviation authorities in Indonesia, Ethiopia, the U.S. and other countries are also reviewing factors such as maintenance, pilot training, the absence of information about MCAS in the plane manual and FAA oversight of the initial certification of the 737 Max in 2017.

Boeing has a lot riding on clearing the certification process. The crisis has already cost the company billions of dollars.

The company has lost $40 billion US in market value since the start of March and announced Thursday that it would take a $5.6 billion-hit in revenue and pre-tax earnings in the second fiscal quarter as a result of the grounding of the 737 Max.

That did not include the estimated $1 billion it is expected to pay to settle multiple wrongful death suits, about $1.7 billion in added costs associated with the slowdown in 737 Max production or the $100 million fund it set for families and communities affected by the disasters.

At least one airline, Saudi Arabia's flyadeal, has cancelled its order for 50 737 Max planes and taken its business to Boeing's rival, Airbus.

Every month that it can't deliver the planes means Boeing is paying to store them and not seeing any profit.

Reducing inventory, which Boeing did in April when it cut 737 Max production from 52 to 42 planes a month, also has a cost, since the company has already made investments and hiring decisions based on higher production numbers.

"Part of it is you don't want to lay off the men and women who make them because they're well trained. It's hard to replace them. It takes years to do that," Moore said.

Nevertheless, some analysts and airlines have been bullish about the company's ability to weather this crisis and unload its backlog of jets once it's given the green light by the FAA.

"We expect Boeing to work through near-term issues with the 737 MAX," said J.P. Morgan aerospace industry analyst Seth M. Seifman in a research report that forecast the company's share price to rise from the roughly $369 it's trading at today to $430 by December.

In May, American Airlines CEO Doug Parker said he trusted there was an "absolute fix" for the software problem and would be sticking with the 737 Max if it passed FAA certification.

Admittedly, most airlines have few other options. Airbus, Boeing's main competitor, has a several-year backlog.

Air Canada had 24 Max planes in its fleet of 400 aircraft and 37 on order when the planes were grounded in March. The airline said it was operating 75 Boeing 737 Max flights daily before the grounding, carrying 9,000-12,000 passengers.

The 737 Max jets made up only about six per cent of 1,600 scheduled flights system-wide, but their absence has been felt. The airline has temporarily suspended or delayed some summer routes (full list here) and substituted aircraft on others.

Regulators in the U.S., Europe, Canada and Brazil have agreed to co-ordinate the ungrounding the 737 Max when the time comes, Bloomberg reported last month.

China, which has the largest Max 8 fleet in a single country and was the first to ground the planes, could be the outlier, especially as there are currently politics at play in terms of its trade negotiations with the U.S.

Still, it will be hard for it to maintain that position for too long.

"China has 300 of these airplanes on order, and they desperately need them," said Boyd.

Boeing is not the only one that will have to work to restore its reputation in the wake of the airline disasters.

U.S. lawmakers are looking into whether the FAA's certification of the 737 Max was rigorous enough or whether it gave Boeing too much leeway.

He and Michael Stumo, whose 24-year-old daughter, Samya, died on the same flight, testified before the U.S. House of Representatives subcommittee on aviation along with other expert witnesses Wednesday.

The scrutiny is warranted, says Moore.

"There's a considerable sense of disappointment — the FAA let us down."

Njoroge and Stumo also urged legislators to require pilots be trained on flight simulators, not an online course as has been the case in the past, before recertifying the plane, a cost that would likely have to be borne by Boeing, although not all experts agree it's needed.

Boeing said it's working with airlines and regulators to get the software update certified and a training program for pilots in place.

"We have taken a thorough and methodical approach to the development and testing of the update to ensure we get it right," the company said in a statement to CBC News. 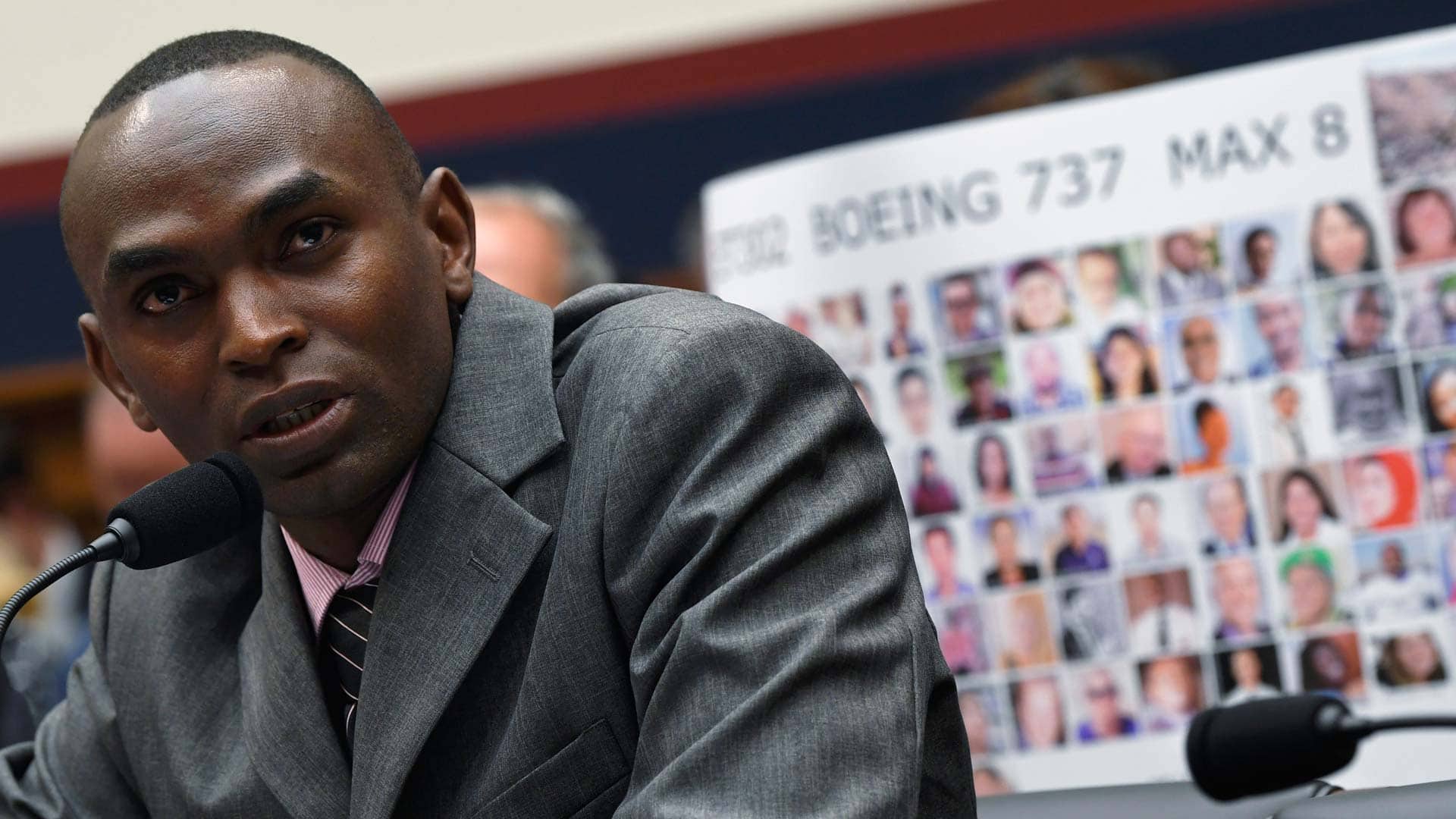 737 Max probe hears from man who lost family in crash

1 year agoVideo
3:04
Boeing Co. said it will dedicate half of a $100-million US fund it created to address two deadly crashes of its 737 Max planes to financial relief for the families of those killed. 3:04

Whether passengers believe that remains to be seen.

A recent survey of U.S. airline passengers by Atmosphere Research travel consultancy found that only one in five respondents said they would definitely fly on 737 Max in the first year once it was reinstated, and two in five would take a more inconvenient or expensive flight to avoid the plane.