Inside the Bay's $60-million bid to take on Amazon

The Hudson's Bay Company wants to rule cyberspace. The company has spent $60 million on a new, high-tech e-commerce warehouse in Toronto. But to be No. 1, it will have to unseat the current king of Canadian e-commerce.

Hudson's Bay Company CEO Jerry Storch is beyond excited. Even though his chief of logistics is supposed to be leading the media tour of the retailer's new high-tech e-commerce warehouse, Storch can't resist adding his two cents at every turn.

"It takes 15 minutes from the time we get an order till it can be out the door," he proudly tells the visitors at the 750,000-square-foot facility in Toronto's east end. "That's astounding."

When the group reaches columns of three-storey-high shelving, an enthusiastic Storch describes the robotic system that zooms up and down, searching out merchandise and delivering it to the workers who will box it up.

"When the robots are going down, they're recharging their own batteries, from the friction against the walls," he says.

The Bay has spent $60 million on this "Perfect Pick" system. Goods purchased on its website will be packed and shipped from here. Company officials say it's the most advanced technology of its kind in Canada.

It's all part of Storch's grand ambition to make North America's oldest company the champion of retail's newest frontier  — e-commerce.

"Nobody will beat us on the internet," Storch declares. "Nobody."

But the reality is the Bay is getting soundly beaten on the internet.

Walmart and Best Buy's Canadian sites get more monthly visits, according to web traffic analysis done by SimilarWeb. So does Canadian Tire's website, which doesn't even offer delivery. Customers can only reserve merchandise online and then have to visit a Canadian Tire store to pick it up.

But the king of Canadian e-commerce is American giant Amazon. Its Canadian site is No. 1, and its American site, Amazon.com, ranks higher than any other international retailer operating in Canada.

"In a very short period of time, Amazon has been able to amass a simply astonishing level of market share," says Ontario-based retail consultant Doug Stephens, author of the upcoming book Re-engineering Retail. "It's really leaving its competitors in its wake."

Stephens says Amazon is more than a retailer — it's an innovation, data and technology company all rolled into one, which spends billions on research and development.

He says no retailer in Canada even comes close in terms of energy and money poured into e-commerce.

"For a long time, Canadian retailers just sort of shrugged their shoulders about e-commerce. They didn't think it was that big of a deal. Now all of a sudden, along comes Amazon and the tables have turned," Stephens says. "I think they've recognized that e-commerce is the future and that someone else is capitalizing on that future, and it's not them."

Stephens says it would be a mistake to count out the Bay, partly because it has something Amazon doesn't: physical stores.

"They have a distribution network that's already built, and these stores could be repurposed to become distribution hubs," he says. "It's a huge advantage."

Online shoppers who want to return or exchange a product may prefer to visit a store instead of paying postage to make a return via mail, the way Amazon customers do on some purchases.

Not surprisingly, the Bay's CEO also sees bricks and mortar locations as important because the retailer can offer its customers two different shopping experiences.

"The stores are a huge competitive advantage and a lot of internet retailers are only starting to wake up to that now," Storch says. "Our dressing rooms are our No. 1 competitive advantage in the world. The ability to go to the room and try it on and make sure you have the right size, it's huge. Returns on the internet are very high."

Amazon has been experimenting with pop-up stores, and is reportedly considering opening retail locations specializing in groceries, books and fashion.

"Amazon is a great competitor," Storch says. "But so are we." 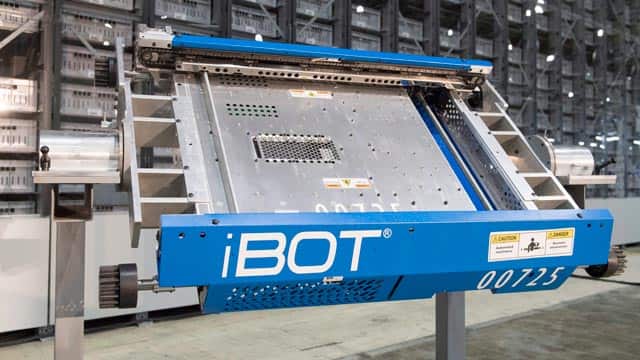 The Bay is ready for e-commerce