Basma Hameed first discovered para-medical tattooing by tattooing colour into her skin to cover burn scars. Now she has a booming business, transforming the lives of others. 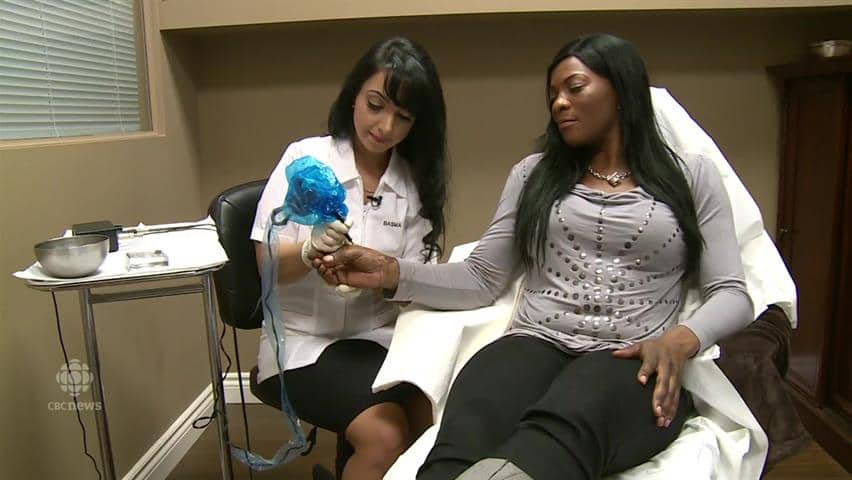 Samira Omar pushes back her headscarf to reveal burn scars that swirl along her face and neck. Her hands are also dotted with colourless patches where her skin was scorched.

The 17-year-old says she was the victim of a horrific bullying incident in August. She says four classmates she thought were her friends, beat her and then doused her with boiling water.

"I remember I looked into the mirror when I was calling for help and I could see my skin completely hanging off me," says the soft-spoken girl. "It just felt as if I'd been through hell and back."

She thought she’d be scarred for life. But then Omar heard about para-medical tattoo specialist Basma Hameed. She didn’t hold out much hope because she’d been let down before when she consulted specialists.

"It was just like, am I going to go in and just have another plastic surgeon or dermatologist tell me 'oh, you're not going to get colour back?'" she said.

But Hameed told Omar that she could restore her natural skin colour. While inspecting the scars, she said, "We'll make sure we cover all of these areas. But it will take a series of treatments."

One step at a time

Over time, Hameed will camouflage Omar’s burns by tattooing them with ink that blends with her natural skin tones.

"When she told me she could actually get my pigments back and find a skin colour that could match my actual skin colour, it's just a big sigh of relief," Omar says.

Patients from around the world seek out Hameed’s skills. She started her Toronto clinic in 2011 and recently opened a second location in Chicago. In addition to scar victims, she also treats people with vitiligo — a skin disease that causes loss of pigment — and breast cancer survivors who need redrawing of their nipples or eyebrows that disappeared during chemotherapy.

"I think that I'm good at para-medical scar camouflage because I was able to work on myself, and I was able to see the process of it," she says.

When Hameed was just two years old, she was badly burned by hot oil in a kitchen accident in her native country, Iraq. She endured more than 100 painful procedures —from plastic surgery to laser treatments. But half her face remained scarred with red discoloration from third degree burns. She was advised nothing more could be done.

I think that I'm good at para-medical scar camouflage because I was able to work on myself.- Basma Hameed, para-medical tattoo specialist

"I was told by my plastic surgeon that I needed to take my money and go on a vacation. For me, I felt like that wasn't the end of the road. I truly believed that something else did exist. So I did a lot of research, and of course I went to school. I made sure I knew what I was getting myself into."

What she was getting into was an emerging form of cosmetic tattooing. Hameed discovered the procedure when she got an eyebrow tattooed to replace the one she had lost from the burn. She decided if tattooing could replace eyebrows, then why not her original skin colour?

"When I started working on my face, I was extra careful. I wanted to make sure that I was going to get the right result," she says.

Hameed not only transformed her own face, but she also started what is now a booming business, helping transform the lives of others.

On this day, she is treating Nafi Nzambe, who burned her hand in a cooking accident. Hameed carefully chooses the right colour to match Nzambe’s skin and begins tattooing the white marks left by the burn.

When asked what she thinks of Hameed, Nzambe lights up. "She's good! So I can smile now because of her."

Nzambe shows a section of the scar where Hameed has planted pigment as proof. "It's like my normal skin," she says, "So I have hope."

Hameed is also giving hope to Omar, who she is treating for free through her charity, the Basma Hameed Survivors Foundation.

It's a big relief for Omar, who is still trying to cope with what happened to her. She says police are investigating her bullying case, which happened near London, England, her home at the time. She has since retreated back to her birthplace, Canada.

"When I hear her story, I felt like I relate so much," says Hameed. "I wanted to reach out to and help as much as possible."

She has to wait a few more months to treat Omar because the scars are still fresh. But she already has a way to help. She shows the young woman how to apply scar concealer. Hameed developed the product — again by experimenting on herself.

After, Omar stands in the mirror, smiling. "It's a great finish, honestly, thank you so much," she tells Hameed with renewed confidence.

"I am proud of myself for not giving up but what I'm mostly proud of is the reaction [I get] from people," says Hameed.