2 of Canada's top banks back away from marijuana industry

Scotiabank and the Royal Bank of Canada say they aren't providing accounts to companies associated with the marijuana industry, leaving some business owners scrambling to find alternate arrangements.

Scotiabank and the Royal Bank of Canada say they aren't providing accounts to companies associated with the marijuana industry, leaving some business owners scrambling to find alternate arrangements.

After a decade-long relationship with Scotiabank, Hemp Country owner Nathan MacLellan says he received a letter from the bank late last month stating his account was being cancelled.

The store in Woodstock, Ont., sells marijuana-related items such as pipes and bongs but no actual cannabis, MacLellan says.

"It's kind of insulting really, especially when legalization is right on the horizon," he says.

"Nothing in the store that we sell is illegal. Every single variety store sells pipes and bongs nowadays, so why are they singling us out all of a sudden?"

Since then, MacLellan has managed to secure an account with a local credit union, but he says the process was not without headaches. The first credit union he contacted gave him the "same rigmarole" as Scotiabank, he says. 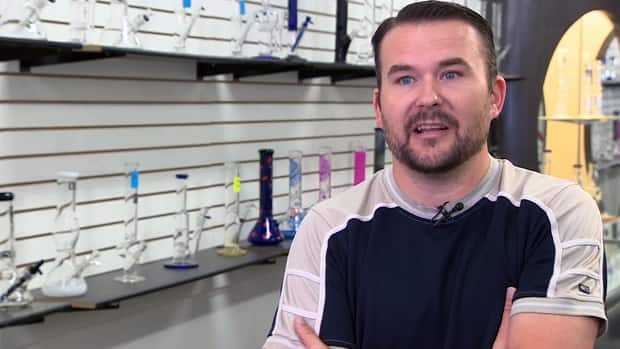 4 years ago
1:49
Renee Filippone reports on 2 banks confirming they are cutting ties with marijuana-based businesses 1:49

Earlier in August, a fledgling medical marijuana producer said it received a phone call from Scotiabank, advising them that it will no longer be doing business with cannabis-related companies.

The company, which is currently in the process of obtaining a licence to grow medical marijuana, did not want to be named due to its concerns that going public could negatively affect its application with Health Canada.

Scotiabank spokesman Rick Roth said in an email that due to privacy issues, the bank can't comment on specific instances.

"We consider our stringent risk management practices a key strength of our business," he said.

"This is why the bank has taken the decision to close existing small business accounts and to prohibit the opening of new accounts for customers classified as 'marijuana-related business."'

Roth added that Scotiabank will continue to monitor the industry and may change its position in the future.

Royal Bank also confirmed that it doesn't provide banking services to companies "engaged in the production and distribution of marijuana."

"We confirm that as part of our normal business practices, the bank periodically reviews the client relationships we have against several factors used to balance the benefits and risks associated with providing them with banking services," spokesman AJ Goodman said in an email.

"Please know that decisions like these are not taken lightly and are only done after a careful assessment."

Bruce Linton, the CEO of Canopy Growth Corp., says he received a letter from RBC roughly a year ago informing him the bank was canceling the licensed producer's account.

He recalls that a few other licensed producers received similar letters around that time.

"My gut feeling is that probably someone in risk analysis somewhere determined that marijuana was a topic which had uncertainty surrounding it," Linton said.

"So rather than looking at determining which [companies] were in concert with the laws and which were not, all were treated the same."

Since then, Canopy has been banking with Alterna Savings credit union.

TD Bank said it assesses all applications on a case-by-case basis. CIBC and the Bank of Montreal did not reply to requests for comment.