The Bank of Canada decided to keep its benchmark interest rate right where it is on Wednesday.

Roughly 50/50 odds of a rate hike next month

The Bank of Canada decided to keep its benchmark interest rate right where it is on Wednesday, but warned of rate hikes to come as inflation heats up.

The target for the overnight rate stays at 1.25 per cent. The central bank's rate impacts rates that Canadians get from retail banks for savings accounts and debt such as mortgages and lines of credit.

In justifying its decision, the bank warned that higher gas prices plus minimum wage hikes are expected to have a "transitory impact" on inflation in the short term, but it sees the rate staying at two per cent over the medium term — right in its target range.

"Inflation's at two per cent," governor Stephen Poloz said at a press conference after the decision was announced. "That's a good starting point because that's the destination." 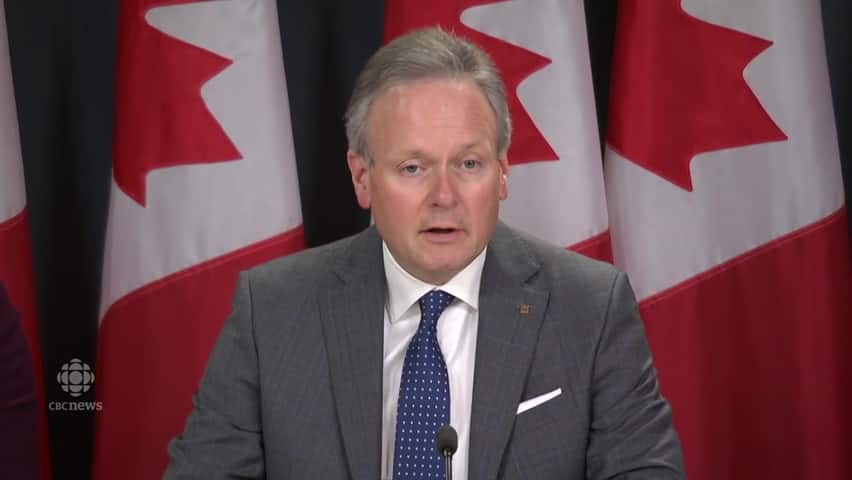 The economy performed slightly weaker than the bank expected in the first three months of 2018, the central bank said, but it expects that to rebound in the latter half of the year.

"The economy is projected to operate slightly above its potential over the next three years, with real GDP growth of about two per cent in both 2018 and 2019, and 1.8 per cent in 2020," the bank said.

The bank said weakness in the housing market plus trade uncertainties are weighing on the economy's prospects, but it expects a boost from increased foreign trade, plus higher wages for Canadians.

All added up, the bank clearly signalled its intention to hike rates gradually.

"Higher interest rates will be warranted over time, although some monetary policy accommodation will still be needed to keep inflation on target," it said.

The bank's next scheduled announcement is May 30. Investors in financial instruments known as interest rate swaps predict about a 50/50 chance of a hike that day.

Economist Frances Donald with Manulife said she expects the bank to hike its rate the meeting after that, in July, but wants to make sure the uptick in the cost of living is sustainable first.

"Inflation recently has moved back to its two per cent target, but they are going to want to make sure that we stay there," she said in an interview with CBC News on Wednesday.

Toronto-Dominion Bank economist Brian DePratto agrees with that assessment, noting that on the whole the statement and accompanying monetary policy report was quite bullish

"The core message sent today appears to be that Poloz and company remain set on further hikes, but are in no rush to get there," DePratto said.