Canada's central bank decided to keep its benchmark interest rate at one per cent, unchanged now for almost four years.

Central bank's rate has now been steady for almost 4 years 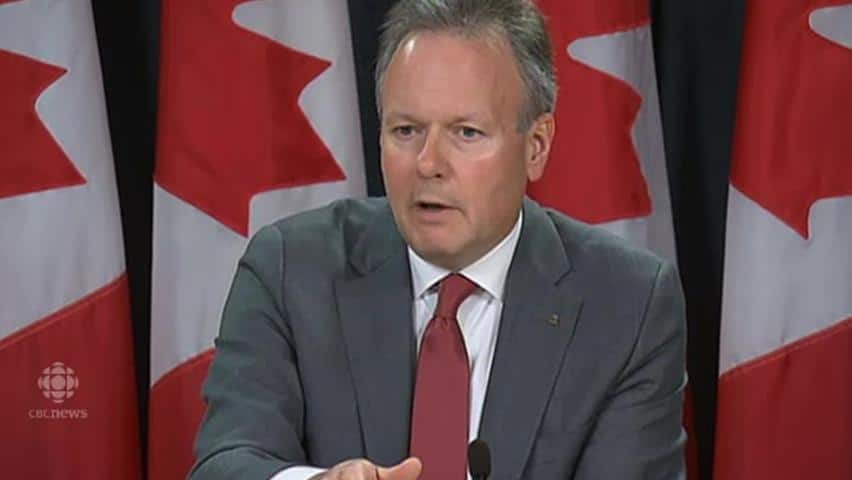 6 years agoVideo
2:14
Bank of Canada's Stephen Poloz says a lack of investment is still holding back the global economy, but things may be about to change. 2:14

Canada's central bank decided to keep its benchmark interest rate at one per cent today, the same level it has been at for almost four years.

The Bank of Canada announced in its latest policy decision on Wednesday that it will keep its target for the overnight rate — the yardstick against which most consumer loans are based — steady at one per cent.

Although most economists were expecting no change in the rate, the choice of wording is often closely scrutinized to see if the central bank is leaning toward a rate hike or a cut, if and when it does decide to act.

Stephen Poloz joined guest host Mike Finnerty to talk about interest rates, house prices, consumer debt, Canada's lopsided economy and what he plans to do about it all on The Current at 8:30 a.m. on Thursday morning.

Instead of suggesting rate hikes are in the offing, the bank softened its tone and suggested it's in no hurry to hike rates if and when it chooses to act.

The economy is expected to reach full capacity around mid-2016.- Bank of Canada statement

"The bank is neutral with respect to the timing and direction of the next change to the policy rate, which will depend on how new information influences the outlook and assessment of risks," the bank said.

The bank's use of the word "neutral" was a new and strategic addition to the rate decision, but in an accompanying document, called the monetary policy report, it is clear the bank thinks we're in a brave new world where interest rates will be much lower than we're used to, for much longer.

"We are still a long way from home," Bank of Canada chief Stephen Poloz said. "Our economy has room
to grow. And, when we do get home, there is a growing consensus that interest rates will still be lower than we were accustomed to in the past."

The Canadian dollar initially dropped on the news, but by the time the bank's full 23-page accompanying report was fully digested by the market, the loonie was back where it was before — a little below 93 cents US.

Despite the care to remain neutral, there were a few indications that the bank's overall outlook has become a bit more pessimistic. The bank shaved a tenth of a percentage point off of its GDP growth projections for the near term — to 2.2 and 2.4 per cent, this year and next.

"Consequently, the economy is expected to reach full capacity around mid-2016, a little later than anticipated in April," the bank said.

If and when the economy does return to normal — whatever that means — it's not likely to be a sharp, upward bounce, Poloz said at a press conference discussing the report.

"The process is more like a healing process than one that turns like an elastic band," Poloz said of what he expects an economic recovery to look like.

The bank also noted that job growth in Canada has slowed this year, with an average of just 6,000 new jobs created every month in 2014.

There are also 100,000 fewer people in the prime work age group of 25 to 54 who are employed or looking for work today than there were six months ago, the bank noted.

Slowing job growth and stagnant wages aren't a recipe for economic growth, which explains why the bank's tone turned a little more pessimistic. Some private-sector economists agree with that view.

"We think it will take much longer than 2016," Capital Economics economist David Madani said. "Overall, the bank's latest policy statement supports our view that interest rates will have to remain low for longer than the consensus view."

One ray of sunshine in the bank's report Wednesday is that it expects to see a "soft landing" in Canada's housing market, and also expects household finances to stabilize as debt levels come back to a more sustainable level. That's good news for the overall economy, as it should lead to theoretically higher consumer spending.