American Airlines says it has suspended an employee after video emerged of a heated exchange with a passenger who came to the defence of a crying woman holding a baby. 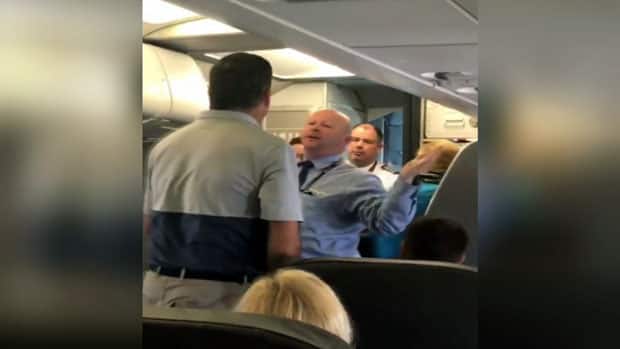 4 years ago
0:25
American Airlines has suspended an employee after video emerged of a heated exchange with a passenger who came to the defence of a crying woman holding a baby 0:25

American Airlines says it has suspended an employee after video emerged of a heated exchange with a passenger who came to the defence of a crying woman holding a baby.

The commotion began Friday afternoon after an airline employee — according to Facebook user Surain Adyanthaya — "violently" took the woman's stroller, "hitting her with it and just missing her child."

You can also watch the Facebook video of the exchange here.

The Facebook video posted shows the female passenger visibly upset as she asks an employee to return her stroller.

It does not show anyone getting hit, but it does capture a male passenger a couple of rows away challenging the employee who allegedly took the stroller, while the woman stands sobbing in the aisle.

"Hey bud, you do that to me and I'll knock you flat," the man can be heard saying as he gets out of his seat.

"Why don't you try it? Hit me. Hit me. Come on, bring it on," the airline employee says once the two men are face to face.

The confrontation unfolded on American Airlines Flight 591, as the plane was preparing to take off from San Francisco, bound for the Dallas-Fort Worth airport.

The passenger eventually returned to his seat and the employee left the plane. The woman who had her stroller taken was later seen in a Facebook photo holding what appeared to be twin babies.

"What we see on this video does not reflect our values or how we care for our customers," American Airlines said in a statement. "We are deeply sorry for the pain we have caused this passenger and her family and to any other customers affected by the incident."

The company said it was "making sure all of her family's needs are being met while she is in our care" and upgraded them to first class seats on a different flight to Dallas.

"The actions of our team member captured here do not appear to reflect patience or empathy, two values necessary for customer care. In short, we are disappointed by these actions," the airline said.

The incident comes less than two weeks after passenger David Dao was dragged from a United Airlines plane heading from Chicago to Louisville, Ky., after he refused to give up his seat on the overbooked flight.

In the comments section of a story about the incident on Yahoo, a person with the username "Eric" claimed to be on the plane during the encounter and came to the defence of the airline employee.

According to Eric, the employee informed the woman that there was no room to store the strollers she brought on the plane, at which point "the woman immediately escalated the situation and within about 30 seconds was screaming at him at the top of her lungs."

The Yahoo commenter goes on to say that the employee escorted the woman and the children to the front of the plane and attempted to lift the stroller over her while moving past her, but that she pushed him, causing the stroller to hit her.

The person said the Adyanthaya's video begins at this point. CBC News was not able to independently confirm the person's comments.