Hour-by-hour reaction on the day after the NDP form government in Alberta. 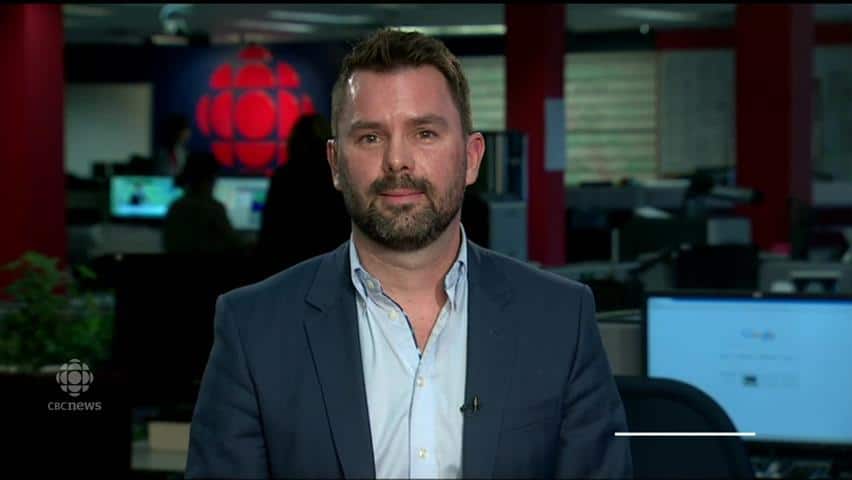 6 years agoVideo
6:17
Spokesman Jeff Gaulin on how petroleum producers are feeling about the historic shift in government 6:17

As the sun rose on the horizon this morning, downtown Calgary seemed to have an orange glow as thousands of workers arrived at the downtown skyscrapers.

Whether the glimmer in the sky was real or imagined, what's on everyone's mind is the first change in government in more than four decades. The Progressive Conservatives are out and the NDP are in.

For the oilpatch, what's certain is uncertainty.

Here's how the day played out as markets opened in the morning.

CBC business commentator Deborah Yedlin describes the concerns over the result of the election for the energy sector.

"Now the business community, for the first time in 44 years, has no connection to Edmonton. And that is a very frightening prospect," Yedlin says.

On a conference call with investors, Enbridge CEO Al Monaco congratulates NDP leader Rachel Notley.  Monaco says he is encouraged by Notley's speech late last night about her desire to work with the energy industry.

Markets open lower, with the TSX's energy sub-index taking a beating, despite the fact that oil traded above $62 per barrel for the first time since December.

Oil sands players are hit the hardest, with Cenovus dropping five per cent.

George Fink, the chief executive of Bonterra Energy, is preparing for a meeting at Raging River Exploration, where he  sits on the board. He says Raging River will be fine, since most of its operations are in Saskatchewan.

However his own company, Bonterra, drills for oil in Central Alberta.

"We have not made that decision, but we'll be looking at the possible impact on cash flow and what the options are, in terms of the other provinces."

Fink said that conventional producers like Bonterra will fare better than higher cost oilsands producers. That is the sector to watch, he said.

Husky Energy CEO Asim Ghosh describes the NDP victory as a "new day" while talking to investors on a conference call. But, he says it's business as usual for the company. "You can't change the wind but you can adjust your sails," says Ghosh.

Husky Energy begins its annual general meeting at Calgary's Stampede grounds. Husky's earnings dropped by 71 per cent in the first quarter of 2015 on weak oil and gas prices.

Premier designate Rachel Notley begins her first post-election news conference and is almost immediately asked about her relationship with the energy sector.

"I'm going to be reaching out to industry," said Notley. "They can count on us to work collaboratively  with them. And I'm hopeful that over the course of the next two weeks, they'll come to realize that things are going to be A-OK in Alberta."

Markets are not reassured. Energy stocks continue to trade down.

Husky Energy's CEO tells journalists "Fundamentally, we have wide experience working with a number of different political parties. We have worked with the NDP in several jurisdictions."

Ghosh was coy about what his message would be for Notley or the next energy minister.

"I'm reminded of a statement made by a very senior global executive who ran a bank, at that time headquartered in Hong Kong, and when he was asked what he was telling the governor of Hong Kong, he said 'I save my best advice for the governor's ears alone.'"

"The NDP's platform differs from the recently released 2015 Budget, with modestly higher spending and revenue intake over the next five years," said TD Economics in a note to clients.

"There will continue to be concerns surrounding the impact of NDP policies on the Alberta economy. However, we are not inclined to change our economic forecast based on yesterday's election result."

The TSX is about to close and many energy stocks are down.

"There's definitely a level of dramatization and that's why I expected the market to get hurt," says Rafi Tahmazian with Canoe Financial.

"But now the investment community and the energy banking advisers need to really assess what this means in the long term."

Stock brokers continue to reflect on how the day played out.

"I didn't see panic selling today at all," says Sheryl Purdy, an investment advisor with Leede Financial Markets. "They did not get clobbered."

Energy stocks were down, but Purdy figures it could have been a landslide of selling. She is advising her clients to pay attention to the change in government.

"NDP policies are not business friendly," says Purdy, suggesting some clients think about starting to invest in Saskatchewan companies.

Brenda Kenny from the Canadian Energy Pipeline Association says CEPA is happy to work with the NDP government on safety and market access issues.

Market access is where Rachel Notley may differ in her outlook. The premier designate said during the campaign that she wouldn't use taxpayer money to support approval of the Northern Gateway or Keystone XL pipelines, which is not the same as being against pipelines in general.

"It's going to be important to Canada to diversify the type of markets we have access to from this country. I don't think anything changes there," said Kenny.

"It will be useful to see where the government chooses to go on some of its specific policies. But whether or not a barrel of oil is refined in Alberta, or refined downstream, you still need to put the steel a metre into the ground to move that liquid."