5 people give their 2 cents to Alberta's new energy minister

Marg McCuaig-Boyd might just have the hardest job in Alberta right now. With that in mind, we have collected one piece of advice from five people, including one who held the energy minister job and another who struck panic in the heart of the oilpatch.

Anne McLellan, Ted Morton and others weigh in on the challenges facing Marg McCuaig-Boyd 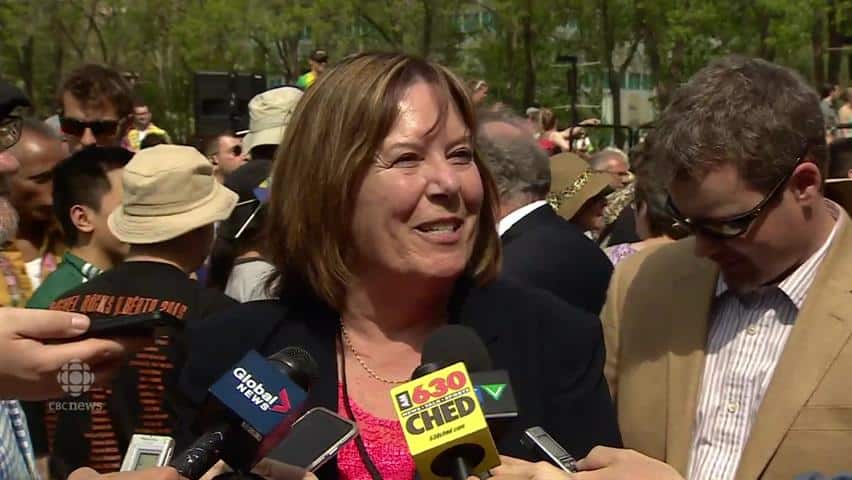 Marg McCuaig-Boyd might just have the hardest job in Alberta right now.

Like all the new NDP cabinet ministers, she has a steep learning curve ahead of her. But McCuaig-Boyd will also face extraordinary scrutiny as she feels her way through the next few months. Scrutiny from an energy industry that is going through a bust, from investors on Wall Street, politicians in Washington DC, and environmentalists around the world. All of whom have different agendas.

With that in mind, we have collected one piece of advice from five different people, including one who has held the energy minister's job and another who once struck fear in the heart of the oilpatch.

Anne McLellan became the federal Minister of Natural Resources in 1993, when the Chrétien government swept into power, decimating the Progressive Conservatives.

When I first got the job, the industry was panic stricken.- Anne McLellan, former Federal Minister of Natural Resources

"When I first got the job, the industry was panic stricken," said McLellan.

"There's this feminist lawyer who's an academic. The new Minister of Natural Resources is a woman, she's a feminist and she's a lawyer, how much worse can it get?"

"What I and my staff realized from the beginning was that we needed to listen. Sometimes people think that we live in Alberta, we know a lot about the oil and gas industry. Most people don't, we have superficial knowledge."

McLellan said she ultimately had a very constructive relationship with the Canadian Association of Petroleum Producers (CAPP) and other stakeholders.

"You have to strike, if it's required, the balance between some of the things you said during the election campaign and the situation after you've listened intently to the industry, the challenges, the opportunities. Governments need to be willing take on board the things they learned. Get as many objective options as possible."

Ted Morton held the same job as McCuaig-Boyd under premier Alison Redford in 2011 and 2012. His advice is a little more pointed.

"Don't make the same mistakes that  Ed Stelmach made, don't bring in a royalty review that makes Alberta uncompetitive when it comes to capital investment."

"And two, if the government wants to pursue the upgrading of bitumen in Alberta, don't make the same mistake that Ed Stelmach and Alison Redford made with the northwest upgrader. It's impossible to build a profitable upgrader in Alberta under current circumstances."

Trevor McLeod is the director of the Centre for Natural Resources Policy with the Canada West Foundation. But, before than he worked as a public servant in Alberta energy department. He says the minister doesn't have to be an expert.

In three years, I saw four ministers," said McLeod. "My advice is actually quite practical and it pertains to the public service side."

"It is to take the time to get to know your team. Despite what you might sometimes hear, there are some very talented people in the department of energy. Often they are not in the places you expect to find them.

"If you take the time to find those bright lights, I think you'll be rewarded with great advice, and I think the people of Alberta will benefit," McLeod said.

"Yes, she has a steep learning curve, anyone who takes that job does. You need someone who is smart, who can understand nuanced arguments, and can ask good tough questions."

​As an engineer, Joule Bergerson has spent her career researching greenhouse gas emissions from the energy sector and expects the climate change file to be an important one for McCuaig-Boyd. She advises taking a holistic approach to the problem.

Taking the wells-to-wheels approach, but doing it across the the entire economy, can help you to make better decisions- Joule Bergerson, University of Calgary

"Taking the wells-to-wheels approach, but doing it across the the entire economy, can help you to make better decisions," says Bergerson.

"If you look at the full life cycle of oilsands or conventional oil, 60-80 per cent of the emissions come from burning the gasoline and diesel and jet fuel."

The discussion around greenhouse gases in Alberta has been very focused on what's going on in the oilsands and power industries, but Bergerson says that misses a big part of the picture.

"If you only focus on the extraction, you're missing a huge portion of where the emissions are happening."

​Deborah Yedlin is a long time columnist with the Calgary Herald and has watched the energy industry through its ups and downs for years. She thinks McCuaig-Boyd should take her time.

She needs to spend a lot of time understanding how the energy sector works- Deborah Yedlin, Calgary Herald and CBC Radio columnist

"She needs to have confidence to reach out to people in the industry, who are able to provide the insight that she needs," says Yedlin. "She needs to spend a lot of time understanding how the energy sector works."

"She needs to trust the people she connects with are there to provide her information that will help her move ahead and not cause any unintended consequences."

Tracy Johnson is the senior producer of CBC's western digital business unit. She's been a business reporter/producer with CBC on radio, television and online for 15 years. @tracyjohnsoncbc