Actor Tom Cruise spoke with reporters and fans in Toronto Thursday evening at a downtown red carpet event for the Canadian premiere of his new science-fiction thriller The Edge of Tomorrow. 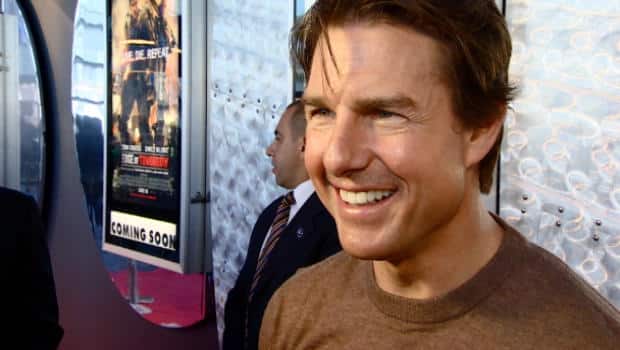 6 years ago
2:41
Hollywood superstar Tom Cruise walked the red carpet tonight in Toronto for the premiere of his sci-fi film The Edge of Tomorrow 2:41

Tom Cruise really knows how to work a carpet.

The only person I've seen it do it better was George Clooney pressing the flesh at the Oscars.

Cruise has certainly had enough practice. He arrived in Toronto Thursday evening after a 24-hour blitz that saw him wake up in London, fly to Paris and finish in New York City.

But Warner Brothers, the studio behind the film, had an interesting strategy for the Canadian premiere of Edge of Tomorrow, which CBC attended.

The red carpet was staggered with packs of contest winners penned in behind ropes. Cruise would do a quick scrum with a few reporters, then recharge and bask in the attention of fans.

When it came to the media, the movie star was fully on message track. A pro pushing hard to sell the film, singing the praises of co-star Emily Blunt — "amazing," he called her — and what he calls a sci-fi popcorn adventure.

Chatting with the fans, Cruise flashed that famous smile often, laughing easily, posing for selfies, throwing arms around strangers. He was the proper boy scout, peppering conversations with "Nice to meet you" and "Thanks."

With the media, it's all business. Questions about his daughter, Suri, were deflected.

As for a question about what day he would choose to live over again (the movie involves time travel)?

"I like living in the moment," he said. The moment for Cruise is the pitch. Running the gauntlet. Wink. Smile. Wave. Keep moving.