The filming of the Oscar-nominated movie Room was a demanding and painstaking process for its cast and crew not only because of the challenge of filming in a small space but also because of the difficult subject matter. Luckily, a Montreal set designer and a Winnipeg-trained trauma psychologist were on hand to help.

There are no chase scenes through the desert, no period sets, no planets‚ no bears. Just a room. One room for two actors... and 70 crew members. For many of them, the tiny room — three metres long by three metres wide — would become the most complex set they'd ever worked on.

"I think the reason I was on the short list was I had done a movie with the producers a few years earlier," said production designer Ethan Tobman over coffee at a Los Angeles café.

Director Lenny Abrahamson ended up hiring the Montreal native to design the set of the film Room, a Canadian-Irish co-production based on the novel and Oscar-nominated screenplay by Irish-Canadian writer Emma Donoghue. 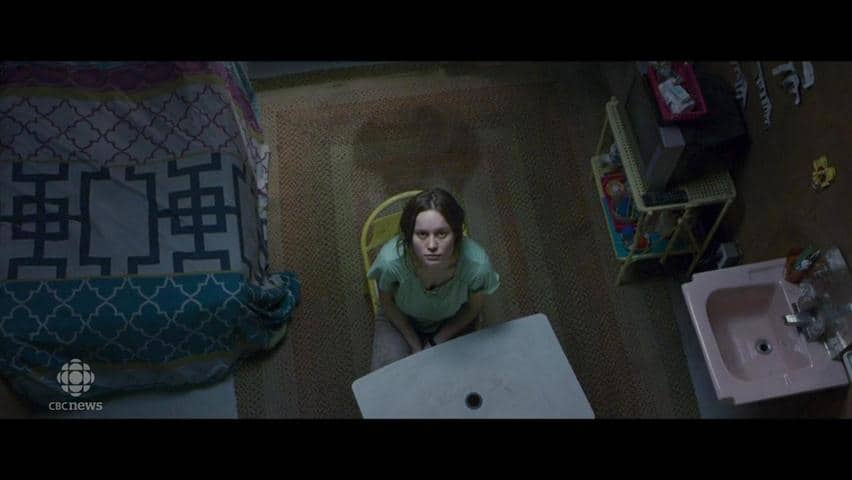 Building Room: the story of the Oscar film's tiny set

5 years ago
2:40
How Room's crew, actors and advisers built the real and psychological prison of the Oscar-nominated captivity drama. 2:40

The film tells the story of Ma, a young woman who is abducted and repeatedly sexually assaulted by her captor for seven years and gives birth to a son, Jack, with whom she lives in the confines of a single room for five years before the two manage to escape

For Tobman, much of the work of building the small room to which Jack and Ma are confined began before the first sheet of plywood went up.

"I approached Room's research by kind of approaching captivity as an abstract concept," Tobman said. "I started by doing research on everything from Auschwitz to favelas to micro-apartments in Tokyo, Hong Kong, to the American penal system, really studying how people live in micro, tiny environments. And from that, we came up with the idea that every square inch of Room needed to have a backstory."

But to tell that story, Tobman would have to fit all the crew and equipment into a tiny shed. After mulling it over, he said, he realized the solution was itself a puzzle. He designed the room as an inverted Rubik's Cube.

"We began to realize that we needed to approach building this set in a modular capacity. We needed to get 70 people to work on it from the outside," Tobman said.

I approached every tile of the set as a clue to the years of love and history [and] intimacy in captivity that our two characters have experienced.- Ethan  Tobman , production designer

"Each piece was removable. You could essentially shoot, light, do makeup from the outside looking in. This provided an extraordinary intimacy for our two actors because so much of the time they were alone inside while we were outside, and it gave us naturalism and realism.

"Lenny and Danny [Cohen], our cinematographer, felt very strongly from the very beginning that the camera should never be able to shoot anything from the outside of the physical confines of the space. So, while the body of the camera may be outside, the lens is inside. We are never breaking that fourth wall. Similarly, I approached every tile of the set as a clue to the years of love and history [and] intimacy in captivity that our two characters have experienced."

No detail, he said, was overlooked. Tobman even calculated the angle of the sun's trajectory over seven years to gauge where the wall paint would fade. And he actually spent a night in the room.

"As a production designer, you are always looking for nuggets of truth — those little things that make the set real," he said.

Those nuggets of truth were what the actress Brie Larson was looking for to help her play Ma. She told the CBC about the experience in September at the Toronto International Film Festival.

"Most of the work came from speaking with a trauma specialist," Larson said. "I spent hours picking his brain."

"One day, an email came, I think from the production company in Toronto, asking me if I would meet initially with Brie Larson to help her try to get an idea of what the character would be going through," Briere said from his Los Angeles office.

He pointed to two empty chairs where Larson and Abrahmson sat with him for hours discussing previous cases of abduction and abuse in captivity.

"Those cases allowed me to share with Brie a little more directly what her experience as Ma would probably be like," he said. "She is, obviously, really a very brilliant actor. She almost didn't need me. I was telling her things she seemed to know intuitively, but I think really, though, her awareness and notions of trauma allowed her to do perhaps an even more impressive job of portraying.

Sadly, many of the media portrayals, in terms of trauma, are not accurate at all.- John Briere, trauma specialist

"Of course, the movie and the book were really well done initially. It's not like the plot line really changed. But I think Lenny has said, for example, in Q&A's that one of the effects of the consultations allowed him to see more directly how Brie would be suffering more after the abduction than during the abduction."

Briere has seen the film several times now. He says he and his colleagues believe it's as realistic as a movie can be.

"Sadly, many of the media portrayals, in terms of trauma, are not accurate at all," he said. "They either fetishize them to make them more interesting than they should be on a certain level or they whitewash them instead and make them not be as bad as they actually are.

"It's not an easy thing to do at all, but I do think they accomplished it really well ... I think they came pretty close to showing what that experience was."