Robbie Robertson has written a new book for young readers: Hiawatha and the Peacemaker, which recounts a profound story the Grammy-winning musician first heard from an elder at the Six Nations Reserve when he was nine. 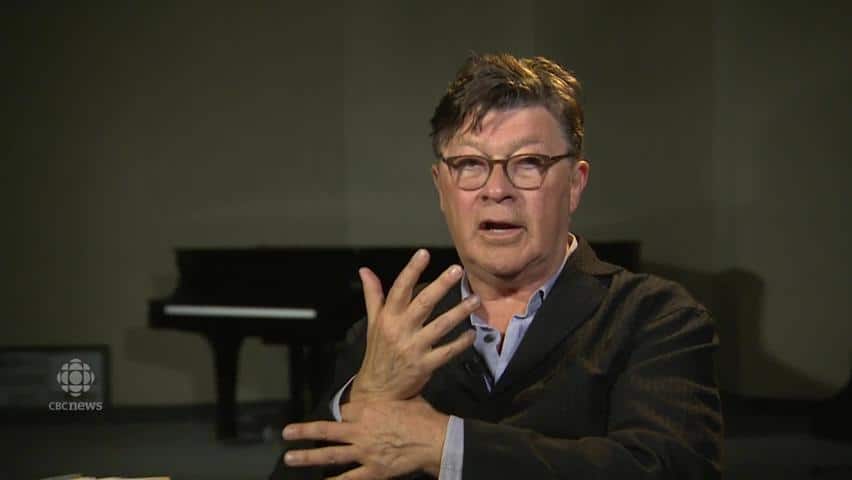 Robbie Robertson on Hiawatha and the Peacemaker

5 years agoVideo
3:37
The iconic Canadian singer-songwriter shares the personal tale behind his new children's book Hiawatha and the Peacemaker. 3:37

As a child, the Band's Robbie Robertson was spellbound when he first heard an elder recount the tale of Hiawatha and the Peacemaker, and the experience changed his life.

Robertson, just nine or ten at the time, realized then he wanted to possess the same storytelling power wielded by that elder in a smokey longhouse at the Six Nations Reserve, southeast of Brantford, Ont.

And though he's received countless honours as a singer, songwriter and musician over the years, Robertson jumped at the opportunity to share the tale anew when a publisher asked if he had a story, with personal meaning, aimed at young readers.

The result is Hiawatha and the Peacemaker, a picture book about the Mohawk warrior who helped convince warring Iroquois nations to lay their weapons down. It features vibrant illustrations by artist David Shannon as well as a CD of new music the project inspired Robertson to create.

In the video above, which features a new song Robertson wrote for Hiawatha and the Peacemaker, the singer-songwriter reads from the book and shares the backstory behind it.

Robertson's collaboration with the Caldecott Award-winning Shannon almost didn't happen. Though told the top illustrator had his own books to work on and was also busy with Disney, he asked to meet anyway, if only to get recommendations for another illustrator.

Four thousand copies of Hiawatha and the Peacemaker will be distributed free to First Nations schools and libraries across the country, courtesy of Chapters Indigo.

When the two met, Robertson recounted the tale of how Hiawatha and his spiritual guide, the Peacemaker, managed to convince the five Iroquois nations to move beyond war and fighting to unite.

"He was like 'Whoa, I didn't know anything about that,' " Robertson told CBC News, recalling Shannon's reaction.

"I played him the song I'd written for the book and he said, 'I was coming over here to tell you I can't do it, but now that I've heard this song and this story, I'm in.' "

Robertson has a bit of experience writing for young readers already. In 2013, he published the book-and-CD project Legends, Icons and Rebels: Music That Changed the World, which introduces children to the Beatles, Bob Marley, Joni Mitchell and other groundbreaking recording artists and tells the stories behind their influential music.

With Hiawatha and the Peacemaker, he says he hopes the book will have the same profound effect on children today that hearing the legend had on him as a kid.

"It's quite a gift for me to be able to pass that story on and share that in the tradition of the Indian oral history," he said.

"I always appreciated the idea that when you're at a certain age, that someone turns you on to something that could actually have an effect on your life.... And so, that circle — the great circle — goes round and round."