To say 2014 has been a good year for Matthew Santoro would be a massive understatement. Specializing in creating videos based on BuzzFeed-style lists, he is one of the fastest-growing personalities on YouTube.

If you're counting YouTube subscribers, Matthew Santoro is now bigger than Drake 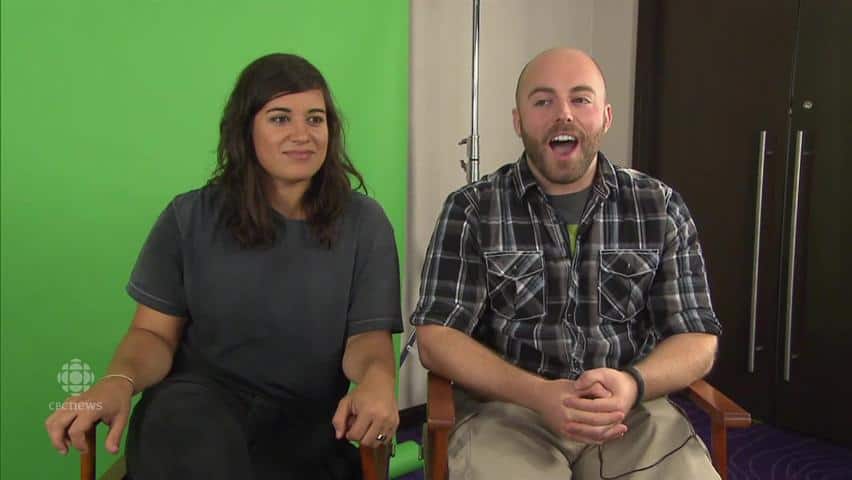 6 years ago
2:05
YouTube comedians Matthew Santoro and Sabrina Jalees dish on the digits in their bank accounts from Montreal's Just For Laughs 2:05

If you're counting YouTube subscribers, Matthew Santoro is now bigger than Drake.

And while the 29-year-old St. Catharines, Ont. native isn't quite at Justin Bieber's level yet, he will be very soon.

To say 2014 has been a good year for Santoro would be a massive understatement.

Santoro, who specializes in creating videos based on BuzzFeed-style lists, is one of the fastest-growing personalities on YouTube, steadily pulling in millions of views for creations such as 10 Creepy Urban Legends That Turned Out To Be True, The 10 Freakiest Coincidences in History, and 5 Lies School Taught You.

But for a guy who has attracted more than 2.4 million YouTube followers and has created work that's been viewed more than 168 million times, Santoro still lives a pretty anonymous life.

I wish I could point to one thing and say, 'That! That's what it was!' but I can't. I think it was a combination of patience and good luck and timing and hard work.- Matthew Santoro

He can recall a Subway sandwich artist doing a double-take while assembling his sub and a custodian at a shopping mall stopping to stare while trying to place his face.

But being chased down the street by a pack of screaming girls has yet to happen, Santoro admits with faux disappointment.

"I think I'm in a good place right now because I get noticed once in a while, but for the most part not, and I'm OK with that," says Santoro.

"Right now I'm kind of like, 'Will all this go away?' You're always questioning and that's the thing — your popularity could go away at any moment, I've seen it happen many times to many different people.

"I try not to worry too much and think too much about where I'm going to be in year, I try to live for the now."

One upload away from going viral

A couple of years ago, Santoro was toiling away at an accounting job, and if you polled his colleagues, few would've guessed their fellow cubicle worker was destined to become a YouTube star.

And neither did he. He was already a couple of years into creating videos for YouTube and, of course, hoped he was just one upload away from going viral and quitting his day job.

But his view counts typically stalled in the low thousands. So when he got laid off from his 9-to-5 job, he wasn't exactly convinced that his newfound spare time would make him rich and famous.

"I would be lying if I said I never thought of quitting, I definitely did. It's hard because I put so much effort into my videos for so long and to not really get any recognition or hardly any for so long is just — a lot of people quit," says Santoro.

Then sometime early this year, thousands of people started clicking on his videos. Then tens of thousands, hundreds of thousands, and eventually millions. He hit a million subscribers in the spring, then doubled that milestone in about two months.

And now just about every video he posts cracks the million-view mark within a few days, generating more advertising revenue than he made at his office job.

"It took just under four years to get any sort of growth whatsoever but when it rains it pours," says Santoro, who's at a loss to explain how his spurt in popularity started.

"I wish I knew exactly, I wish I could point to one thing and say, 'That! That's what it was!' but I can't. I think it was a combination of patience and good luck and timing and hard work. I've never had a viral video — ever —and that's a lot of people's claim to fame. My growth has been — although explosive in a short time — gradual."

Santoro is equally unsure how long he can ride the list trend, but is encouraged that online video stars are going mainstream.

In the U.S., a poll of teenagers this summer found that kids were more likely to pick YouTube personalities over traditional celebrities when asked who they found influential. And the Canadians behind the YouTube hit "Epic Meal Time" have taken their brand to TV with their new show "Epic Meal Empire" on the FYI network.

"It's an incredible time and it's amazing that people like myself are pulling in more views per month than some cable TV networks with a budget of millions of dollars. I have a budget of zero dollars and I pull in just as many views, if not more," says Santoro.

"It's weird and it's bizarre but it's really cool too because it's the evolution of entertainment."