Lois Lilienstein, a member of the Canadian children's musical trio Sharon, Lois & Bram, has died, according to her son. The actress and singer was 78. 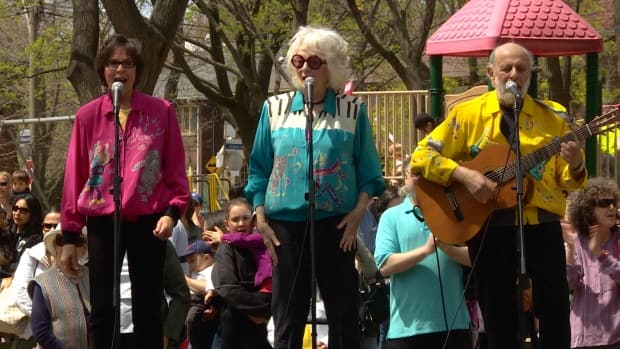 6 years agoVideo
1:14
The trio commemorated the unveiling of the Sharon, Lois & Bram Playground in Toronto 1:14

He said she had a rare form of cancer that was diagnosed in October.

"She was just a normal everyday person that had a phenomenal sense of music inside her," said David Lilienstein, who described his mother as a wonderful grandmother and fabulous cook.

"Turn to your friends and your children and sing 'skinnamarinky dinky dink,'" he said, when asked how his mother's many fans should mark her passing.

Born in Chicago in 1936, Lilienstein formed the popular singing group with Sharon Hampson and Bramwell (Bram) Morrison in Toronto in 1978.

"We decided to make a record. We did not decide to start a career. We just thought we'd make one record together," Hampson said Thursday on CBC Radio's As It Happens.

Morrison said their resulting success was "a 37-year surprise."

"We knew right from day 1 that if a child learns to like a record, that record will get played over and over and over again," he said. "And if a parent is in the room, that parent better like it, otherwise hair gets pulled out of one's own head."

"We wanted to make music that kept us challenged and entertained and we wanted to involve parents as well, and I think we succeeded."

​Hampson told The Canadian Press that Lilienstein was "a woman of many ideas" who "would do anything" for her audience and was never concerned about being embarrassed while performing.

"It's kind of hard to believe, we haven't been singing together much in the last few years because Lois really had kind of withdrawn from all of that, but we were constantly in touch," said a tearful Hampson.

"She came from a different musical place than Sharon and me. Sharon and I came out of the folk music world and she came out of the Broadway world. So it was a very interesting combination and I think that partly explains the success that we had," Morrison said.

The multi-award-winning recording artists won the hearts of Canadian kids and families with their fun-loving songs like as Skinnamarink and Peanut Butter.

The group also had a top-rated preschool show, Sharon, Lois & Bram's Elephant Show. It aired on TVO and CBC in Canada, and on Nick Jr. in the U.S. for nearly a decade, according to the show's official website.

The three became Order of Canada honorees in 2003.

While Hampson, 72, and Morrison, 74, continue to tour, Lilienstein retired in 1998 after the death of her husband, Ernest.

'Magic of our childhoods'

"She respected children," Cavoukian told CBC News. "She knew who kids were and she knew it was important for music to engage kids in a way kids could make it their own."

"She always said, 'Don't forget the actions' because she knew kids loved movement … She taught me many things."

Toronto Coun. Josh Matlow, who got to know the Lilienstein family when he worked to dedicate a Toronto park in Sharon, Lois and Bram's honour, said he grew up with the group's music.

"She, along with Bram and Sharon, were part of the magic of our childhoods. Their music played a very special role in so many of our lives. Even today, those of us who are in our 30s and 40s can still sing verbatim the lyrics of Skinnamarink,"' he said.

"Lois dedicated her career to making children the world over so happy by her music. And I think I know that we are all grateful."

David Lilienstein said the family is planning a funeral ceremony, but is talking about holding a more public celebration of his mother's life later this summer.