After a career of movie-making in Hollywood, Keanu Reeves, faced a host of new challenges in China when shooting Man of Tai Chi, his directorial debut. 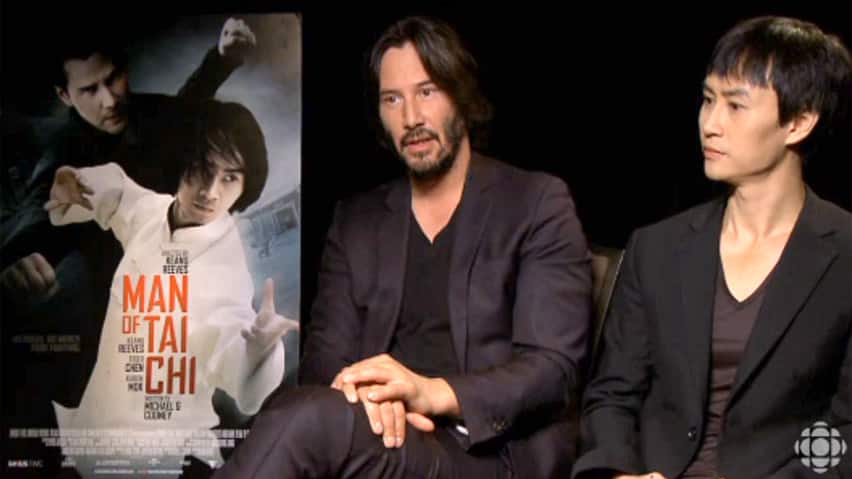 After a career of movie-making in Hollywood, Keanu Reeves faced a host of new challenges in China when shooting  Man of Tai Chi, his directorial debut.

For one, the high-profile co-production faced a system where its script and footage came under review. Since mainland China doesn't have a film-rating system, movies must go through levels of approval because they could be seen by audiences of all ages.

"I had to take down some of the violence. I had one sequence where the lead punched someone in the head 11 times... so we made it five. And that was okay — it got the story across," Reeves told CBC's George Stroumboulopoulos.

For the Canadian-raised star of such hits as The Matrix, Speed, Point Break and Bill & Ted's Excellent Adventure, dealing with Chinese filmmaking practices — including the country's notorious film censors — simply became part of the process.

When roadblocks popped up, "I called them opportunities," Reeves noted in September, during a Toronto International Film Festival panel about his experiences making the rollicking, fast-paced Man of Tai Chi.

"I had to make these changes and the scope of the film opened up," he said of his Hollywood-China co-production.

I just didn't want to hand the story over to somebody else. I had wanted to direct and I was looking for a story to tell and this became the story- Keanu Reeves

The action-packed kung fu fable has been a labour of love that took years to bring to the screen. Man of Tai Chi tracks an unparalleled young practitioner of the tai chi style who is tempted by wealth and power after joining a lucrative underground fight club, run by Reeve's villainous character.

A familiar tale nonetheless filled with thrilling, rapid-fire fight sequences and set to a high-energy soundtrack, the film stars Tiger Chen, the stuntman and fight choreographer who coached Reeves for The Matrix. The Chinese martial artist first approached his Hollywood friend years ago for help developing the story and to appear in the project, but over time, Reeves became more and more attached.

"I talk about feeling it in my heart and in my mind," Reeves told CBC News during TIFF, adding that he began to feel "proprietorial" about the project.

"I just didn't want to hand the story over to somebody else. I had wanted to direct and I was looking for a story to tell and this became the story."

In recent years, North American filmmakers have courted Chinese audiences and investors, but have typically offered little in return: perhaps an extended sequence filmed in Shanghai or a pretty Chinese starlet in a fleeting role

Reeves and producer Lenore Syvan approached the powerful China Film Group as a partner on the $25 million US project and the result — set in Beijing and Hong Kong, featuring high-profile Asian stars in key roles and crafted by a largely Chinese production crew — screens like a real collaboration.

Reeves and Syvan said they dove right into the Chinese filmmaking scene in their attempt to make Man of Tai Chi a production that combined both western and Asian movie-making conventions and expertise.

"At the end of the day, a movie is a movie," Syvan said at the TIFF Asian Summit industry panel.

"It's just how you go about it that's different. Both Keanu and I took great lengths to learn how these guys work."

Man of Tai Chi's hybrid nature carries through the film's theme of struggling between tradition and modern life, old and new, pure and mixed martial arts, Mandarin and Cantonese as well as English.

Despite their efforts, Man of Tai Chi didn't fare well at the Chinese box office this summer, where its rivals included the latest from celebrated action filmmaker Johnnie To (Blind Detective) and a blockbuster, youth-targeted, Sex in the City-like hit called Tiny Times.

The filmmakers were disappointed in a lacklustre publicity campaign and the decision to market the film as simply a regular Chinese title.

"I think that is a cautionary tale...[Chinese audiences] are used to seeing films a certain way," Sylvan said.

"It was a learning curve for all of us... but people loved it when they got to see it or knew it was out."