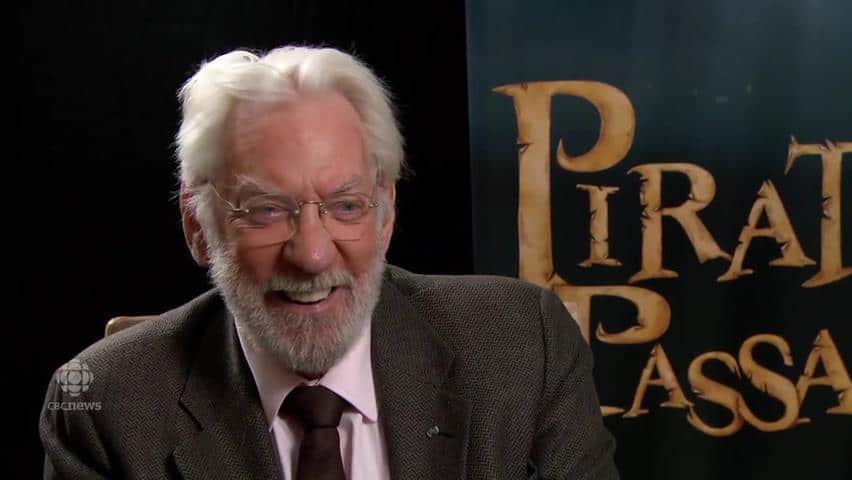 Fresh off his role as President Snow in the Hunger Games trilogy, you would think Donald Sutherland would be looking at another blockbuster for his next project.

But instead, he looked to home, and to his Maritimes roots, to find what he describes as a "passion project," the made-for-TV animated film Pirate's Passage.

Sutherland, who was born in New Brunswick but spent his teenage years in Bridgewater, N.S., not only provides the voice of the main character in the film, he also co-wrote and co-produced it for CBC.

"Oh gosh, I just loved it, it was everything, it was my life, it was how it was when I was a kid," said Sutherland of the film's story in an interview with CBC News.

Based on award-winning book

Pirate's Passage is based on the award-winning young adults' book by WIlliam Gilkerson.

Set in the fictional Nova Scotia town of Grey Rocks, it's a tale of a lonely, bullied boy who befriends a mysterious ship captain. The captain bears a striking resemblance to legendary pirate Charles Johnson, dead for 200 years – but apparition or not, he guides the boy through adventures, and teaches him important life lessons along the way.

The book itself made quite the voyage across land and sea to get into Sutherland's hands.

"One of Bill Gilkerson's neighbour's sons was coming to California, to Hollywood. He wrapped the book in brown paper package – that's the story – and gave it to the boy and asked him to deliver it to me and somehow it got to Matthew McConnaughey," said Sutherland.

Sutherland read the book, and immediately thought of turning it into a film. The passion project had to be put on hold as the Hunger Games films occupied most of his time, but he kept on coming back to it.

Pip Animation studios in Ottawa helped Pirate's Passage come to life.  For the characters' voices, Sutherland called up his actor friends: Paul Gross, Gordon Pinsent, Carrie-Ann Moss and Kim Coates to round out the cast of this all-Canadian cartoon.

Sutherland hopes the cast, along with the film's storyline, which includes messages about bullying, loss of loved ones, even discussions of the merits of capitalism, makes Pirate's Passage appeal to audiences of all ages.

"It's the end of the holidays," said Sutherland. "I'd love it if the parents, if they sit down [and watch it] with their kids."

Watch Donald Sutherland tell the story of his Pirate's Passage journey in the video above.