This week, grotesque, strange and surreal objects from David Cronenberg's living room will be moved to TIFF Bell Lightbox, where more than 60 artifacts, designs, and rare and unseen footage trace the director's boldly idiosyncratic career and prescient cinematic themes.

Props from The Fly, Dead Ringers on display 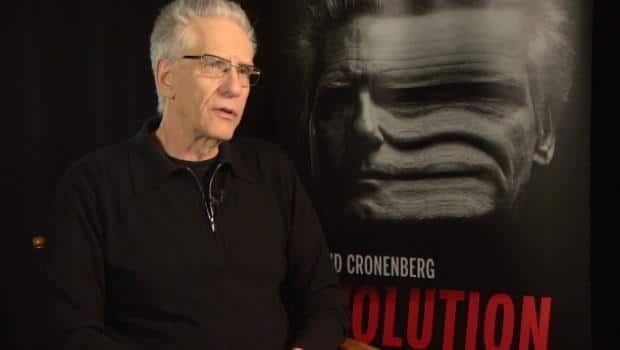 Before finding a temporary home in the new film-inspired exhibit David Cronenberg: Evolution, a select number of the auteur's grotesque, strange and surreal artifacts held a comfortable place of prominence — where else? — in his own house.

The 70-year-old director says that included such bizarre pieces as a maquette of the twin-headed lizard from the futuristic thriller eXistenZ and the knee brace that James Spader wore in the fetishistic Crash.

"To me that was like a beautiful metal sculpture," Cronenberg says of the cold hard frame worn by Spader, whose character is a car crash victim drawn into a kinky, macabre world of sex with other crash survivors.

"[It was] on top of one of my speakers and it looked great. And if you didn't know what it was you'd say: 'That's a great abstract metal sculpture."'

This week, the piece moves from Cronenberg's living room to TIFF Bell Lightbox, where more than 60 artifacts, designs, and rare and unseen footage trace the director's boldly idiosyncratic career and prescient cinematic themes.

They include the "Spectacular Optometry International Helmet" from Videodrome, the telepod from The Fly and the gynecological instruments from Dead Ringers, continuing right up to pieces from Cronenberg's more recent mainstream releases such as the tattoo kit from Eastern Promises and costumes from A Dangerous Method.

The sheer number and impressive scale of Cronenberg's freakish Naked Lunch pieces mean they get their own section entirely, thanks in no small part to the inclusion of insect-typewriter hybrids, life-sized reptilian mugwumps and the "sex blob."

TIFF's CEO and director Piers Handling says they first approached Cronenberg with the idea of archiving his material 20 years ago.

"Of course he had a lot of objects, he didn't have a lot of written material, so he donated that on an ongoing basis with every subsequent film," says Handling, adding that more came from Cronenberg's art designer, costume designer and other collaborators.

"We're very proud of this exhibition, it's not just a gallery show ... we've got a real sense of the arc of David's career and many of the objects he put in the films. But at the same time it's a comprehensive retrospective."

That concurrent career-spanning film series kicks off Thursday with a Halloween screening of 1988's Dead Ringers, to be introduced by Cronenberg and star Jeremy Irons.

Irons returns Friday for an "In Conversation With..." session examining his Cronenberg collaborations on Dead Ringers and M. Butterfly while other screenings and guests include M. Butterfly with costume designer (and Cronenberg's sister) Denise Cronenberg on Saturday, The Fly with special effects and prosthetics designer Stephan Dupuis, also on Saturday, and Naked Lunch with composer Howard Shore on Dec. 8.

Other elements to the umbrella program The Cronenberg Project include the art exhibit David Cronenberg: Transformation running until Dec. 29 at the Museum of Contemporary Canadian Art, the side exhibit Body/Mind/Change co-produced by the CFC Media Lab and also at TIFF Bell Lightbox, and a virtual museum for those outside Toronto at Tiff.net.

The main exhibit Evolution also features a new short film TIFF commissioned for the event. Cronenberg hints that the 10-minute tale will recall some of his favourite themes.

"It involves bodies and surgery and doctors," he says, adding little more. "Thematically, that does connect to a lot of things that I've done, including my first movie, so I guess the connections are all there."

Although Cronenberg has become better known for intense thrillers of late, he sees clear themes that persist to this day.

"The changes are more in terms of genre, of category," says Cronenberg, who is currently putting the final touches on his upcoming feature Maps to the Stars, starring Robert Pattinson.

"They all have certain things that relate — the body consciousness, the importance of the human body as the main fact of human existence and so on. This is my so-called philosophy, it's my understanding of what it is to be a human being and that underlies all the films."

And although it's been over a decade since he's made a horror or sci-fi film, he denies having put those genres behind him.

"I do think in a way I've made my contribution to those genres and unless I have something more to say, something new, something interesting, I don't think I would do that," he says.

David Cronenberg: Evolution begins Friday at TIFF Bell Lightbox and runs to Jan. 19, 2014 as part of The Cronenberg Project.