How David Bowie 'changed the rules' and inspired the LGBT community

David Bowie, the legendary musician and global cultural icon who died Sunday at the age of 69, inspired and empowered many young people who felt they didn't fit the heterosexual mould or the conventional binaries of male and female. 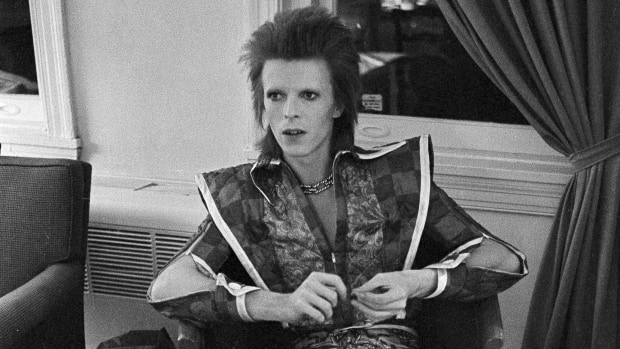 David Bowie: A man of influence

5 years ago
3:03
The prolific musician's style pushed the boundaries 3:03

Since the announcement of David Bowie's death Sunday, tributes have celebrated his profound influence on music, fashion and art. But for many in the LGBT community, it was his parade of gender-bending alter egos that was most inspiring.

"I think he's a super-important figure," said Rae Spoon, a transgender musician based in Alberta who says Bowie's stage personas in the 1970s "defied the ideas of binaries in gender, because you couldn't say he was masculine or feminine."

[For] many people in my queer community, he was an icon that helped us imagine our own importance and possibility.- Chase  Strangio , attorney for American Civil Liberties Union

Chase Strangio, an attorney for the LGBT & AIDS Project at the American Civil Liberties Union, says that for "many people in my queer community, he was an icon that helped us imagine our own importance and possibility."

Known as much for his physical transformations as his musical innovations, Bowie inhabited many characters over a career that spanned six different decades and at least as many musical genres.

David Bowie was a hero of both music and gender.

The characters he portrayed for albums such as The Rise and Fall of Ziggy Stardust and the Spiders from Mars (1972), Aladdin Sane (1973) and Diamond Dogs (1974) are arguably his best known.

Ziggy Stardust was conceived as a bisexual alien while the even more outlandish Aladdin Sane was partially inspired by Bowie's schizophrenic brother, Terry.

With his pallid, almost waxy skin, that shock of effervescent red hair and a kaleidoscopic array of flamboyant outfits, for much of the 70s, Bowie struck a pose of defiant androgyny.

So sad to hear we lost <a href="https://twitter.com/hashtag/DavidBowie?src=hash">#DavidBowie</a>. He brought androgyny to the world and made it cool. A brave musician and warm person. He will be missed

"I think in terms of the mainstreaming of cross- and transgender personalities, [Bowie] is extremely important, more so than any other figure in popular music that I can think of," said Will Straw, a communications professor at McGill University and co-editor of The Cambridge Companion to Pop and Rock.

Bowie drew on a wide swath of influences, from kabuki theatre to mime to Bauhaus art, and while he may not have been overtly political about challenging gender norms, his work showed that you could create your own identity, says Straw.

"The message was that you can constantly remake yourself," he said. "I don't know if it was more radical than that, but certainly in the 70s, for men, it was radical enough."

Bowie inspired and empowered many young people who felt they didn't fit the heterosexual mould or the conventional binaries of male and female.

"Growing up, I spent so much time miserably hating myself and feeling so separate from my body," said Strangio, who is trans and prefers to be identified by male pronouns. "It wasn't until I located queer icons in music, television and movies that I could imagine myself as a whole person. Bowie was a part of that for me."

Queer esthetic was front and centre

A pivotal moment for Reg Vermue, a Toronto-based musician who records as Gentleman Reg, was seeing Bowie's appearance on Saturday Night Live in 1979, which featured back-up singing (and dancing) from drag artist Joey Arias and gay cabaret performer Klaus Nomi, who died of complications from AIDS in 1983.

For the performance of TVC15, Bowie donned a skirt and heels.

"He was always so into the underground, the queer esthetic and that world," said Vermue. "It was so brave of him to do those things. I don't even know if he thought of it that way. I don't know if he would have used that term 'brave' or whether that's just what the art required."

Vermue, who is gay, says he was very much thinking of Bowie five years ago when he began dressing up and performing as Regina the Gentlelady, his glamorous, synth-pop-driven female alter ego.

"I see now that I've done it, why [Bowie] was doing it, and I wish that I had done it a long time ago," Vermue said. "It allows whole different modes of expression to come out."

Rae Spoon, who uses the pronoun "they," says Bowie's pioneering work in challenging gender stereotypes was a reference point, not to mention a source of comfort, when Spoon came out as trans in 2000.

"If there were people trying to pin me as one of the first trans people, people who were messing with the gender binary, I could always just say, 'David Bowie.'"

Spoon says that not only did Bowie complicate issues of gender, "but over the course of his life, he identified as bisexual, even though he was twice married to women."

Indeed, Bowie's sexuality was a source of curiosity and speculation for much of his career. In 1972, he declared in an interview that he was gay and four years later told Playboy magazine that he was bisexual. He was married to his first wife, Angela Barnett, at the time of both interviews (the two divorced in 1980).

In 1983, however, he told Rolling Stone that he was actually a "closeted heterosexual." He married model and actress Iman in 1992.

Strangio says Bowie "was by no means perfect, and I am wary of perpetuating any narrative that he was flawless or unproblematic."

But he insists that Bowie was "someone who took to the stage and changed the rules about gender and bodies and love."

In his later years, Bowie seemed more interested in being an avant-garde musician than a gender-bending performer, says Straw.

The role of challenging gender norms has more recently been taken up by female artists such as k.d. lang, Madonna and Lady Gaga, Straw says

"I think the most important thing that happens after David Bowie is that it stops being men playing around with or challenging masculinity and more and more becomes about women doing things," Straw said.

"They've got lots to reckon with because the expectations and the pressures on being a woman are much stronger."