Breaking Bad star Bryan Cranston says his latest role as blacklisted screenwriter Dalton Trumbo in the film Trumbo poses the same questions we might ask ourselves at a thought-provoking dinner party.

Breaking Bad star Bryan Cranston says his latest role, as blacklisted screenwriter Dalton Trumbo in the film Trumbo, poses the same questions we might ask ourselves at a thought-provoking dinner party.

"Would you point the finger at someone else to save yourself?" said the 59-year-old actor. "All questions we play hypothetically perhaps... but they did for real." 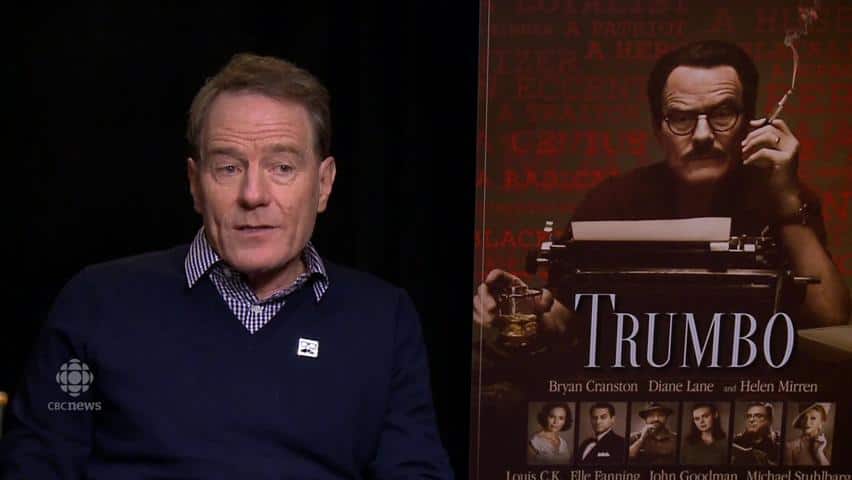 The biopic, which has an all-star cast including Diane Lane, Louis C.K., John Goodman and Helen Mirren, follows the life of Hollywood screenwriter Dalton Trumbo.

"He [Trumbo] never shied away from a fight, whether it was to the power company — their lines were too close — or the school system for something he thought was wrong," Cranston told CBC News during an interview at the 2015 Toronto International Film Festival, where the movie premiered in September.

"He was always firing off letters to all kinds of people, so he was an engaging type of guy."

Trumbo stood up to the U.S. Congress and refused to give information to the House un-American activities committee, which was investigating organizations suspected of having ties to communism during and after the Second World War.

In the process, Trumbo served time in prison and was blacklisted from working in Hollywood by studio heads. Still, the screenwriter went on to win two Oscars after his true identity was revealed behind the scripts for The Brave One (1956) and Roman Holiday (1953).

The Emmy-award winning Cranston describes his character as an eccentric chain smoker on the outside, but honest and straightforward on the inside.

"[He was] just a crazy, odd, complex, weird man but true to his word," Cranston said. "You didn't question what he felt or what he meant. You knew how he felt and how he meant. You will not be bored by Dalton Trumbo."

With files from CBC's Eli Glasner