The death of a child would lead most to inconsolable despair. It also led Vancouver actor and playwright Jonathon Young to an act of creation, serving as inspiration for the startling new dance-theatre piece Betroffenheit. 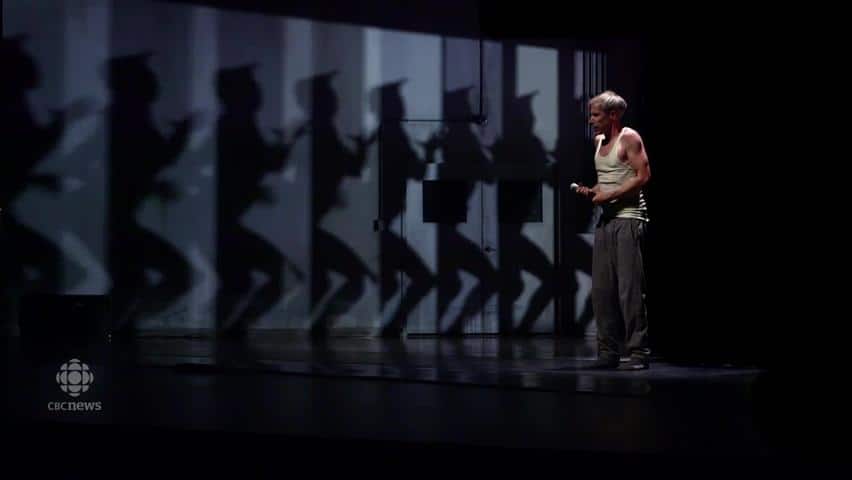 Art from tragedy: 'We had to be careful and be brave'

5 years ago
2:30
Betroffenheit co-creators Jonathon Young and Crystal Pite on turning the personal tragedy of a child's death into a theatre piece about trauma and recovery 2:30

The death of a child would lead most to inconsolable despair; it also led Vancouver actor and playwright Jonathon Young to an act of creation.

Young and his then wife lost their 14-year-old daughter Azra and her two young cousins in a 2009 cabin fire on the shores of Shuswap Lake, near Salmon Arm, B.C. The parents, who had stayed just metres away in a nearby cabin, were unable to save the children.

The terrible personal tragedy has inspired a brave and startling new dance-theatre piece called Betroffenheit (the title referencing a German word conveying the idea of being stopped dead in a state of shock).

Directed by internationally renowned choreographer Crystal Pite, the production stars Young as a man struggling with the effects of post-traumatic stress disorder (PTSD) after an unspecified event.

Betroffenheit doesn't specifically reference its inspiration onstage. Instead, Young portrays a character referred to as "the user," who is addicted to a substance called "the show."

It begins in an industrial room with Young laying in the corner. the audience hears a recording of his voice trying to explain the situation to himself, as an electrical wire writhes onstage. Soon demons that haunt him come to life in the shape of several dancers, as he battles his descent into addiction.

Dance critic Michael Crabb called the show "a brilliantly theatrical melding of dance and spoken word that probes the psychic scars of extreme trauma," in a review for the Toronto Star.

After having its world premiere in 2015 as part of the cultural festival of the Pan Am and Parapan Am Games in Toronto, Betroffenheit is currently on a cross-Canada and international tour. Performances include a sold-out run in Young's hometown of Vancouver, beginning Thursday.

For Pite, who had worked with Young previously, creating art from his personal tragedy was daunting, but necessary.

"One of the things that amazed me or surprised me the most working on this project was how much joy we discovered within the process of making this piece," she told CBC News.

"I hadn't expected that."

For Young, known for his role on the Syfy TV network's show Sanctuary as well as co-founding Vancouver's Electric Company Theatre with Collier and others, "being able to get into a rehearsal room to try things out in a safe environment and to turn very personal, private things into an expression can be a terrifying thing — but it can also be very cathartic.

"Crystal and I worked very hard to find a balance between the personal and the universal, so the story moved outwards from my own personal trauma and became something that I hope many people can relate to," he added.

"I hope they take away a sense of curiosity, of hope, and... a fascination and appreciation for what art can do; how art can be a place for us to come together and experience and share these difficult things and work through them together."