Highlights include Warhol's own memorabilia plus his videos, screen prints, photos 5 years ago
3:22
A new TIFF exhibition opening in Toronto delves into the life and work of pop artist Andy Warhol 3:22

A collaboration between The Andy Warhol Museum and TIFF, the exhibit highlights Warhol's own personal collection of Hollywood ephemera and includes a variety of his artwork, from films, TV episodes and other video creations to photography, drawings, screen prints and a rare tapestry piece.

The display digs right into "the depth of his obsession with celebrity culture and how that really affected all of his work throughout his entire life, from his childhood to 1987 when he died, in every medium he worked with," Laurel MacMillan, TIFF's director of exhibitions, told CBC News on Wednesday during a media preview.

"He became a superstar himself, so this obsession with celebrity was something incredible. To see that, in the depth of the collection coming from the Warhol museum, is amazing."

From his early days in Pittsburgh, according to Warhol Museum curator Geralyn Huxley, the iconic pop artist was fascinated with classic Hollywood screen idols.

Born in Pittsburgh into a poor immigrant family, Warhol grew up during the Depression but found solace at the three local cinemas in his neighbourhood, according to Huxley. 5 years ago
3:45
Geralyn Huxley, curator of the Andy Warhol Museum, discusses how the pop artist developed his obsession for famous faces and what he'd think of social media if he were alive today 3:45

"He went every weekend with his brothers. I think that seeing the Hollywood stars, the costumes, the settings, the glamour, the happy life – I think that really motivated him."

Also, his family – devout Byzantine Catholics – attended a church that had an iconostasis: a large screen in front of the alter that typically features large, gilt paintings of religious figures,she added.

"He would go to church every Sunday and he would see these images of the saints with golden backgrounds, larger than life...I think a lot of that influenced him." 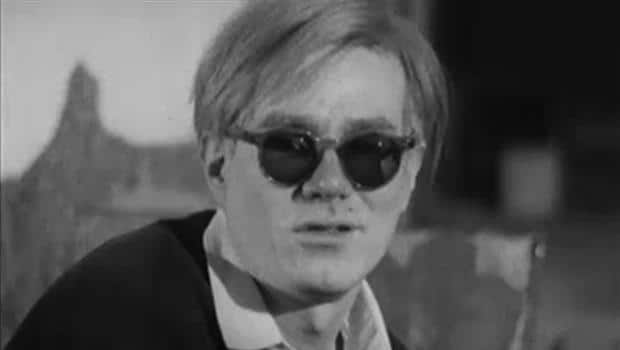 Andy Warhol at work in his New York studio, 1965

2 years ago
10:48
From the Factory, the artist describes what inspires his paintings, his new works in film, and what he likes to watch on TV. 10:48

Later, as his own celebrity grew, he turned his lens on others – redefining fame, including with his vast Screen Tests series of black and white videos. He saw the single-reel, less than three minute videos as "living portraits" of individuals, both famous and anonymous, who visited his studio, dubbed The Factory.

One interactive element of the TIFF exhibition offers a contemporary take on this notable video series: a modernized recreation of Warhol's beloved Bolex camera set up in the Lightbox atrium, will capture participating attendees in their own Screen Test video.

Visitors can also take a big step into Warhol's world at the exhibit, which features a recreation of The Factory in 1964, complete with era-authentic furnishings and decorations as well as screens showing original Screen Test videos of Warhol muse Edie Sedgwick and others.

TIFF is also offering a host of related programming, including: