Bethani Webb could hardly believe her eyes when she scanned the ultrasound screen. Outlined in black and grey; the shape of not one, but four tiny, wriggling bodies — eight kicking feet.

Bethani Webb could hardly believe her eyes when she scanned the ultrasound screen.

Outlined in black and grey; the shape of not one, but four tiny, wriggling bodies — eight kicking feet.

Webb and her husband Tim are expecting identical quadruplet girls.

With no history of multiples in their families through natural conception, the first-time parents were floored.

"I could not believe it, I was in such shock. Honestly, I thought the ultrasound tech was joking. I couldn't believe it," said Webb.

The odds of naturally conceiving identical quadruplets are hard to nail down. According to Webb, her nurse told her the chances are one in 67 million. Other sources estimate that the chances are at least one in 13 million and could be low one in 70 million.

"It was a good thing that my husband was sitting down because he almost fainted," said Webb.

After dating for two years, the couple had just married in June of 2015, and weren't in any major rush to start their family.

"My husband definitely wanted to wait a year. I was fine with whenever it ended up happening, but then we found out we were very excited, only thinking we were having one, not four," said Webb. 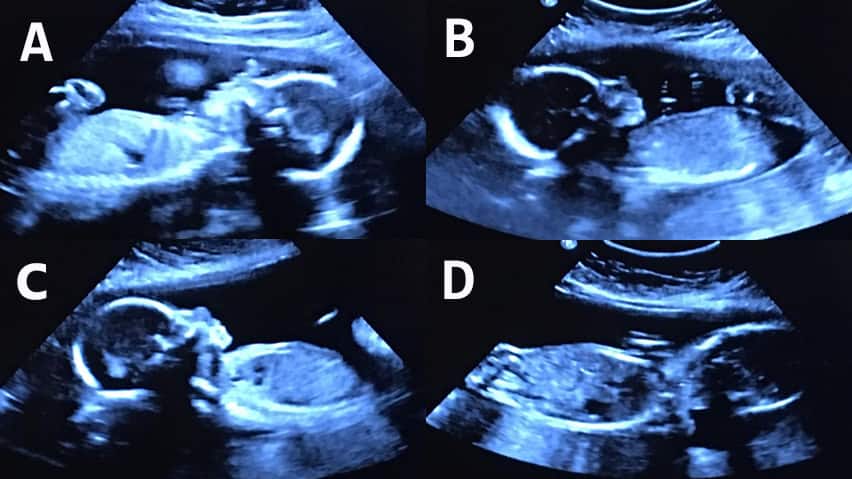 5 years agoVideo
1:03
Bethani Webb shares the story of how she and husband found out they were expecting identical quadruplets. 1:03

Although the couple were well prepared to care for one bundle of joy in their two bedroom apartment, the prospect of caring for an entire brood of new babies has been daunting.

If it weren't for community fundraising efforts in their hometown of Hythe, Alta, Webb says she would be overwhelmed.

"It's really amazing, because there would be no way we could do this by ourselves," said Webb.

Webb is only 27 weeks pregnant, but is already receiving around-the-clock care, as a precaution. Given that the hospital in Grande Prairie is not equipped to care for especially premature babies, the mom-to-be will be at Edmonton's Royal Alexandra hospital until the babies arrive.

And the couple already have the names picked out; Abigail, McKayla, Grace and Emily are expected to make their debut sometime in late April or early May.