Indian residential schools were, for a long time, ignored as subject matter for classrooms in Canada, never mind daycares. One daycare in Vancouver is determined to change that. 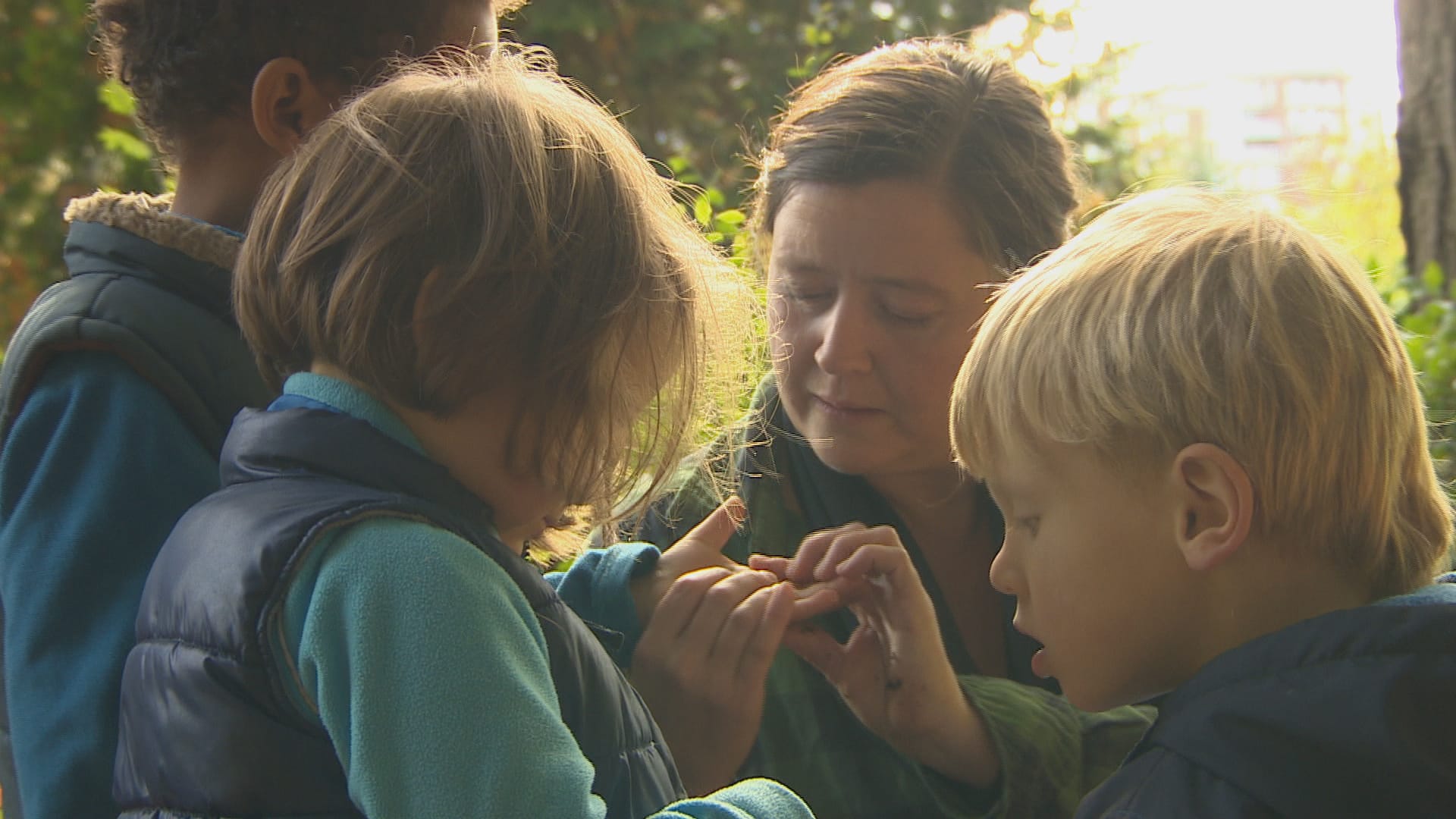 5 years agoVideo
2:39
A daycare in B.C. is teaching toddlers about Canada's dark history of residential schools. 2:39

It's story time at Salal Daycare in Vancouver. Children ages three to four crowd are at the feet of their caregiver, Kristin Webster.

She tells them she's going to read When I Was Eight, a picture book about an indomitable Inuit girl named Olemaun who goes to residential school.

"I like this one," says one little girl with curly blond hair. "It's scary," says a little boy solemnly.

As Webster turns the pages, with its vivid illustrations of nuns shearing Olemaun's long braided hair, and aboriginal children in uniforms on their hands and knees scrubbing floors, she gently asks questions.

"What happened to Olemaun?" asks Webster.

"She got tooken from her mommy and daddy," says one little girl.

"Was she allowed to speak Inuktitut?" asks Webster. "No," the children chorus together.

Indian residential schools were, for a long time, ignored as subject matter for classrooms in Canada, never mind daycares. Webster is determined to change that.

"I was not taught about it, and I'm highly offended. And we're doing these children a great disservice if we don't tell them the truth."

'Never too young to learn'

The Truth and Reconciliation Commission into Indian Residential Schools (TRC) inspired Webster to imagine a residential school lesson plan for a daycare setting.

One of the TRC's key recommendations was for federal, provincial and territorial governments to make lessons about residential schools mandatory for all Canadian kids. But even that "call to action" was aimed at school-age children, from kindergarten to Grade 12, not pre-schoolers.

"You're never too young or too old to learn," insists Webster, an early childhood educator for over 20 years.

"You may not be teaching the very horrific dimensions of this history," says Hare. "We need to give them a language to talk about it in a way that we don't frighten them or trouble some of their emotions."

That was something on parent Paul Cyr's mind when he discovered his daughters — 18 months and five years old — would be learning the traumatic century-long history of removing tens of thousands of aboriginal children from their homes to be educated in church-run schools.

"As a parent, maybe there's some caution about how deep you go, but I think it's establishing an awareness early on," says Cyr.

"It's a positive, progressive thing to start so early in the education system. At this age group, they have a strong sense of right and wrong."

Webster doesn't broach the physical or sexual abuses many students suffered at the schools, simply referencing the survivors as experiencing "hurts," which she says the children understand implicitly when they learn about the disruptions experienced by aboriginal families. She says children don't get emotional about it.

"At this age group, the way they deal with it is different than we would," says Webster.

"They re-enact through play, through talking to each other. I've heard they have discussions at dinner tables about land rights and residential schools," she laughs.

Her lesson plan lasts 10 months. It includes trips to museums to learn aboriginal culture, and nature walks where she emphasizes which First Nations traditional territory they are on.

The toddlers learn aboriginal creation stories, something that inspired them to suggest carving their own totem pole. Last year, they were joined by a work study student from the nearby Musqueam First Nation, Kelly Louis, who shared stories about how loss of language and culture had impacted him.

"I don't want to push my particular agenda on anyone," says Webster. "But I do think these children need to know their country, where they are, and the people who live in it. It's about building community and empathy."

Webster is now in discussions about offering her residential school lesson plan at the 20 other daycares at UBC. She also hopes to expand it, to include participation from members of the Musqueam First Nation and perhaps residential school survivors.