'What better way to create awareness than to actually wear a medallion to say who you are,' vet says 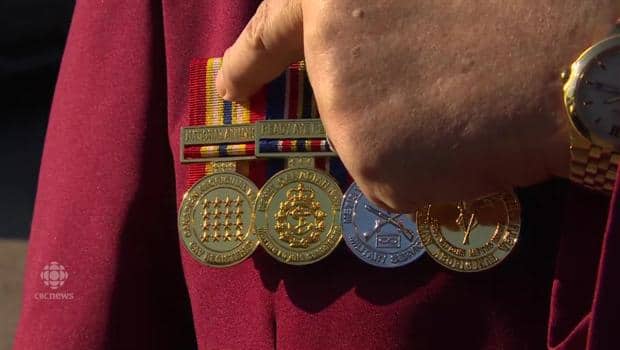 5 years ago
1:15
November 8 is National Aboriginal Veterans Day. And this year, thanks to Blackwolf’s efforts, CAVA has created new medallions to recognize the contributions of aboriginal veterans. 1:15

Richard Blackwolf is a proud 75-year-old Métis veteran who served in Canada's Navy for 13 years.

It's hard to get Blackwolf to talk about his own career but he is quick to praise the work of other First Nations, Métis and Inuit veterans.

Those praiseworthy people include the likes of Betty Ann Lavallee, former National Chief of the Congress of Aboriginal Peoples, who served 18 years in the military, or newly minted MP Robert-Falcon Ouellette, who served in the Canadian Armed Forces for 19 years.

"There is so many examples of [veterans] becoming leaders and using their military organizations skills they developed," he said.

Blackwolf currently lives in Victoria, B.C. however his roots stretch back to Calgary. He has spent the past five years volunteering as the president for the Canadian Aboriginal Veterans and Serving Members Association (CAV).

November 8 is National Aboriginal Veterans Day. And this year, thanks to Blackwolf's efforts, CAV has created new medallions to recognize the contributions of aboriginal veterans.

Manitoba was the first to recognize Aboriginal Veterans Day in 1994, when a private member's resolution passed unanimously by the legislative assembly. The National Aboriginal Veterans War Memorial was unveiled in Ottawa on June 21, 2001. Since then many communities across Canada celebrate the dedication of aboriginal veterans on November 8.

The CAV medallions help tell each person's own story: which era the person served, which department, if the person is a part of any special service (Rangers, for example) and their aboriginal heritage.

This year instead of one heritage medallion, there are three: Native, Métis, and Inuit.

Blackwolf says the word "native" was chosen over "First Nations" because it reflects both status Indians and non-status.

"First Nations, it means they have a treaty with the government and non-status don't. So we didn't want to leave them out. We just call it 'native veterans' because that's who we are, that includes everybody then," Blackwolf said.

"What better way to create awareness than to actually wear a medallion to say who you are."

Blackwolf was 10 when he first stepped inside a navy ship. His mother remarried in the 50s and his new family had a history with the navy near Victoria, B.C.

When the ships were ported, he would go visit his uncle.

"On Sundays, [I would] go with my uncle there and I was able to crawl around on the ships. One of the things I liked crawling around on were the guns," he said with a shy laugh.

"When they asked if I was interested in being a sonar person, like sonar men, I jumped on that," he said.

"It required higher education and it was all aimed at the new electronics," he said of the new system at the time. Blackwolf says the Navy trained him and gave him an education, spending seven years in school along the way.

In 1970 he joined the second new digital navy and was employed out of Dartmouth, Nova Scotia.

"I was in the lead there. I was one of the first few people that were chosen and sent down to Halifax and spent two years in school learning all of that," he said.

Blackwolf was honourably discharged in 1972. He went on to work for the Department of National Defence for 25 years in the weapons department, working with navy ships and systems.

Blackwolf says his career has taken him all over the world.

"It was the Cold War era so we did a lot of patrolling out in the Pacific, looking for Russian submarines that would come and park on the continental shelf here," he said.

"They had a habit of anchoring on a seamount, that was in Canadian waters, at night."

He was part of a crew that had to come up with distractions that would force them to leave.

"Our job was to help the Americans. We used to beat around the mouth of the Strait of Juan de Fuca here and create all sorts of noise and everything."

This year, for National Aboriginal Veterans Day, Blackwolf will be spending time with Manitoba aboriginal veterans.

Tiar Wilson was raised in Opaskwayak Cree Nation, Manitoba. She's reported for APTN National News, CBC Winnipeg, and CBC North. Tiar is also involved with CBC's database of missing and murdered indigenous women and girls and continues to share the stories of these women, their families and communities. She's currently reporting for CBC Aboriginal. @yourpaltiar.