The Neskantaga First Nation in northern Ontario has the longest-standing drinking water advisory of any First Nation in Canada. More than 300 people in this fly-in community in the James Bay lowlands have been boiling their water since 1995. 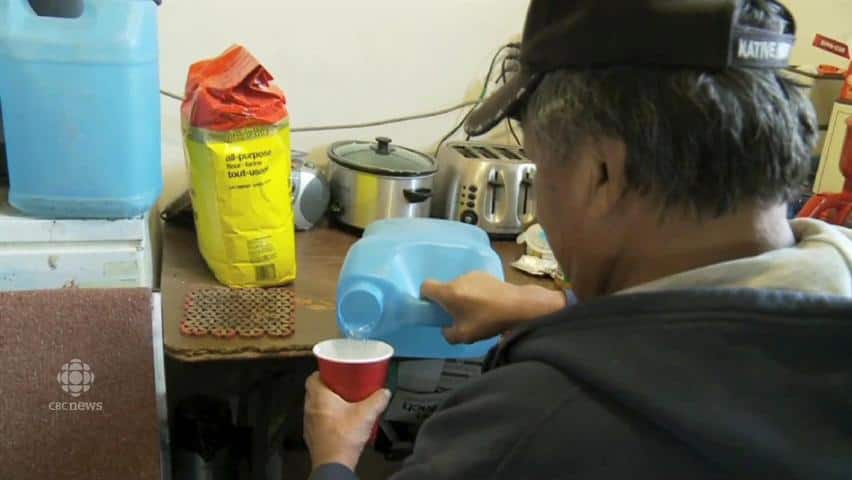 5 years ago
2:06
Neskantaga First Nation in northern Ontario has the longest-standing drinking water advisory of all First Nations in Canada. Meet five people whose daily life revolves around getting clean water. 2:06

The community has been in the national spotlight for some time now, demanding that its 20-year water advisory come to an end.

More than 300 people in this fly-in community in the James Bay lowlands have been boiling their water since 1995.

There is a reverse osmosis system, which purifies water, but it's located on the edge of the community, down a steep hill. Residents have to get to the plant and pick up the water themselves.

Here are five people whose everyday life revolves around getting clean water.

A single mother with two young girls, Hillary Moonias boils her water every day. She doesn't remember a time when she could drink water directly from the tap. Neither do her daughters.

Daily, Moonias pours water from the tap into a pot and lets it boil on the stovetop for at least 10 minutes before putting it in the fridge. It's a hassle, but going to get treated water from the plant would be an even bigger hassle, especially since she doesn't have a vehicle.

"It's hard sometimes with my kids, being a single parent. I have to get a sitter or I have to look for a ride just to go or I have to walk down with them when I get a chance," she says.

Walter Sakanee: 'In the winter, we take the Ski-doo.'

Getting around is not easy for Walter Sakanee, who is in a wheelchair. Getting clean drinking water, especially in winter, isn't easy either.

"We use the Ski-doo sometimes and put the water [jugs] on a sleigh and haul it over here, because those trucks or vans can't get through the snow sometimes," explains Sakanee.

One of two grandsons living with him brings the heavy jugs into the house.

There are five adults living in Sakanee's small house, and they have to manage the water supply so they don't run out.

Water jugs in the kitchen take up most of the space on the small countertop. The jugs are heavy and pouring water out of them and into a small cup is challenging for the elder Sakanee.

Roxanne Moonias: 'I have to wash them 3 times.'

Roxanne doesn't trust the water.  "He's sick, he has a heart condition," she says about her son Brian.

Making sure her baby boy's bottles are clean takes time and patience. She washes and sterilizes the milk bottles three times.

Washing the bottles takes her at least an hour everyday.

Randy Moonias: 'Other people, it's kind of difficult for them.'

Randy Moonias was walking with a wagon full of empty water bottles when CBC was out shooting video in Neskantaga. He does not own a vehicle so the wagon comes in handy.

This winter, he will use a toboggan to make his way to the water plant to fill up his bottles with water that has gone through the reverse osmosis system.

This is a challenge because of the steep hill but he considers himself lucky to be fit enough to accomplish the task.

"It will probably take me 25 minutes back and forth. I do this once a week"

Maggie Sakanee: 'I use baby wipes.'

Maggie Sakanee has a full house. The 59-year-old grandmother shares her home with her daughter, her grandchildren — Hailey, 3, and Ralphael, 4 months — as well as with her lifetime partner.

A couple of times a week, Sakanee goes to the water plant to get water from the reverse osmosis system. Maggie won't use tap water, even if it's been boiled.

"I don't use tap water to cook either because of the little ones. I don't want them to get sick".

Her grandson Ralphael has not been bathed in months because she is worried for his health.  Her daily routine now includes cleaning him with disposable wipes.