In the wake of the recent school shooting, the mostly Dene residents of La Loche are upset with how they are being portrayed in the national media, as a place rife with substance abuse and tragedy. The reality, Duncan McCue reports, is more complex.

Phones have been ringing off the hook at CHPN 89.9 FM — the Dene Voice of La Loche, as its sign proclaims proudly.

Announcers at the little radio station on the top floor of the La Loche arena have been on the air tirelessly, hosting a fundraiser for the victims of the recent violent shootings.

A steady stream of community members come and go, arms loaded with donated items for the auction: quilts, homemade pies, video games. I heard someone even donated an ATV.

So far, the station has raised over $10,000 for the funeral expenses of Adam Wood, the teacher from Ontario shot to death in the La Loche school.

Another $6,000 was raised for the families of the seven still recovering in hospital in Saskatoon. Funeral expenses for the brothers Dayne and Drayden Fontaine, killed in their home, were next on the agenda.

It is is a beautiful display of the generosity of the people of La Loche, the ethic of sharing so much a part of the cultural fabric in this town of predominantly Dene and Métis people. 5 years ago
2:17
La Loche can be a hard place to live, but community leaders are trying to make life better. Duncan McCue spoke to the Chief of a neighbouring First Nation who knew many of the victims. 2:17

I wish I could show you a photo of the heaping pile of stuff being readied for auction in the station's office, or the indigenous ladies efficiently working the phones, recording goods, collecting money. But I can't.

After a couple of requests, I was firmly advised: no media allowed.

One of the worst school shootings in Canadian history has exposed this isolated northern town to national scrutiny.

And many in La Loche are now upset with how they've been portrayed by the press: as a place rife with high rates of drug and alcohol abuse, suicide, and unemployment.

There's good reason that narrative emerged. The residents of La Loche were themselves telling that story, night after night, in their prayer vigils and interviews with reporters.

As they struggled to understand why this particular shooting happened, many expressed fears for their young people and grieved the tragedies in their own lives.

Still, it's a stretch to call La Loche "a town without hope," as one headline declared in the wake of the shooting. The truth is more complex.

One of the most encouraging things I saw in La Loche was a sizeable hunk of glass on a shelf in the living room of 44-year-old Ricky Janvier.

"Do you want to see this?" he asked, in a shyly proud way. It was an award presented to him by a former chief, for five years of sobriety. Janvier has now been sober 14 years.

After a tough childhood and some scrapes with the law, he quit drinking the day he discovered his partner Bonnie Fontaine was pregnant with his first child. "I stopped my drinking habit to be the best father that I can," he said.

Fontaine and Janvier have five kids now. Janvier works seasonally as a forest fire fighter. It can be tough to make ends meet around here.

But the shooting has made things even tougher in their home. Dayne and Drayden Fontaine were Bonnie's nephews, and their deaths opened a deep pool of her own traumas, including suicide attempts.

"My brother actually revived me after I was dead," she told me, tears running down her cheek. "He brought me back to life.

"He told me never to think of suicide again. But it crosses my mind many times." 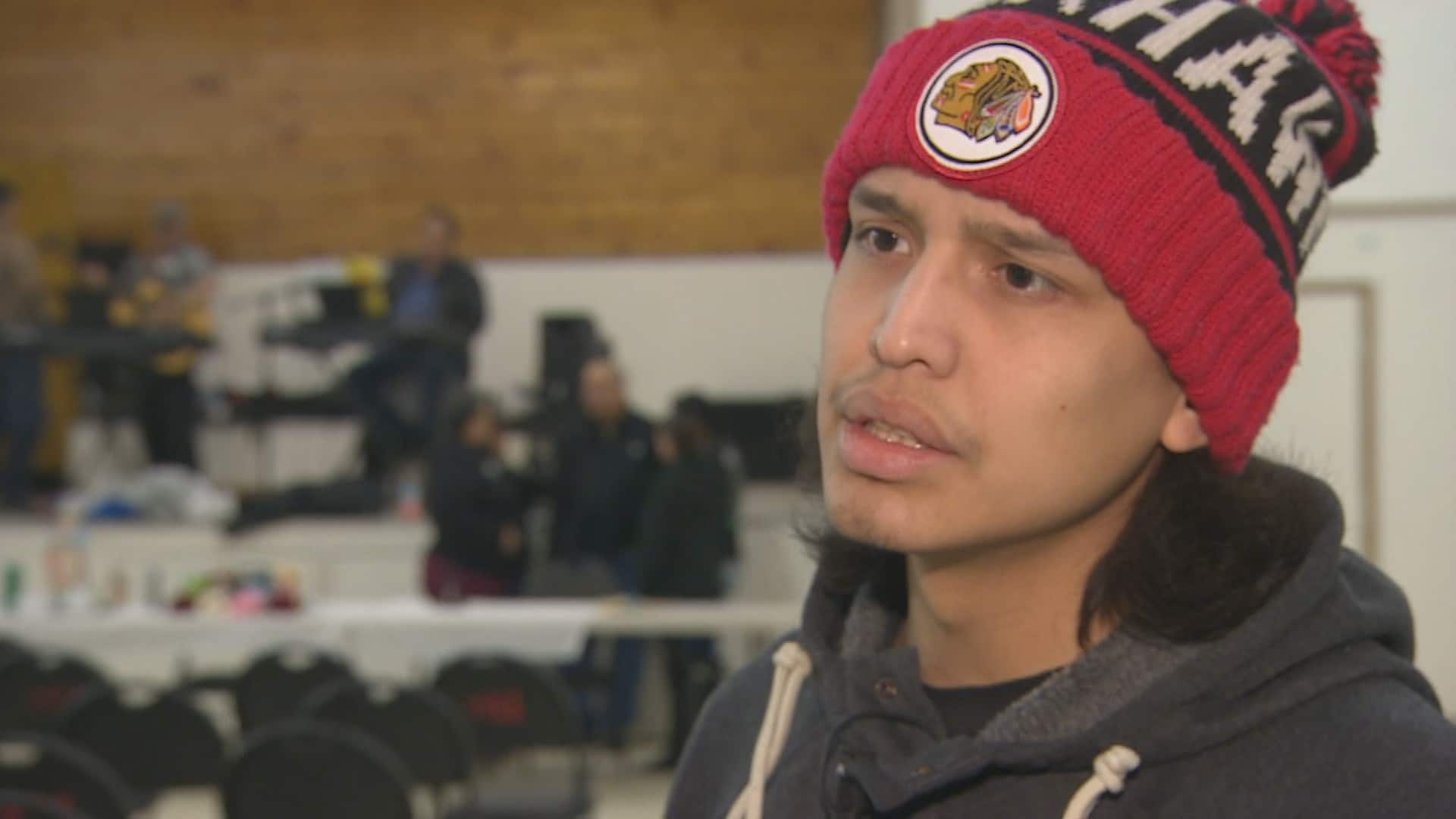 5 years ago
8:22
People in La Loche, Saskatchewan are hopeful, despite a recent shooting and long-standing troubles in the community. 8:22

She credits Janvier for standing by her side, helping her stay clean and focused on family. She spent two years as a teacher's assistant at the La Loche school, and dreams of being a teacher one day.

"What happened kind of got me scared now. Still, I'm not going to put my dreams on hold because of what happened."

I didn't get to spend as much time with the couple as I hoped. They thanked me in Dene — merci-cho — but told me they needed to spend time with their kids right now. I couldn't blame them.

What's also obvious to any outsider visiting La Loche is that Denesuline is the preferred first language of almost all the local residents, it is said.

Yes, there is concern that young people are speaking this language less and less, preferring to zone out on video games and movies in which English dominates.

But many First Nations would be envious of how strong spoken Dene continues to be in La Loche.

It's simply a reminder that, in the search for solutions, the indigenous aspects of the shooting tragedy can't be ignored.

La Loche is not a reserve, but 90 per cent of the residents are indigenous.

The town is also close to the Clearwater River Dene Nation, both in distance and relations. Some children from the reserve attend school in La Loche, which is about a five-minute car ride away.

It's maddening to many locals that the unemployment rate in La Loche hovers around 50 per cent, and the median income in 2011 was under $15,000, when there are immense uranium deposits nearby and the oil sands in Fort McMurray are only 100 kilometres to the west.

When I asked Chief Ted Clark of Clearwater River Dene Nation about how his community planned to move forward after the shooting, he offered a practical solution: get funds to build a youth centre.

But he also had a political take on the tragedy, one politicians from Ottawa and Regina likely heard from him, too. He essentially blamed colonial history and land dispossession.

"The South has a lot of things. We don't," Clark said. "But what the South don't have is the resources in our traditional territory. It's there. We want to utilize it as well. And that's what we want. We want our fair share."