First Nations in B.C. gain libraries thanks to judge, ex-officer

Write to Read project has now built libraries in six First Nations. Former Lieutenant-Governor Stephen Point started the project after visiting remote communities in B.C. "A book is a fork in the road. It’s a turning place. It’s got the power to create a different future," said Point.

Write to Read project has built libraries in 6 First Nations in B.C. 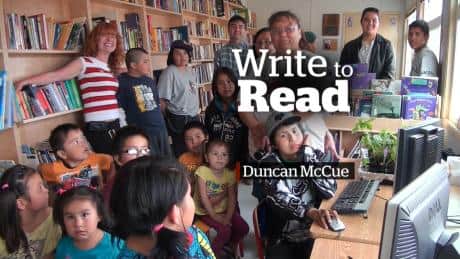 6 years ago
8:12
The CBC's Duncan McCue has the story of a judge and former police officer who are joining forces to build libraries in aboriginal communities 8:12

They’re an unlikely duo — a judge and a former police officer — but Steven Point and Bob Blacker have joined forces to inspire a flood of donations aimed at building libraries in some of the most remote First Nations in British Columbia.

“We started this idea of just promoting literacy. We ended up by bringing libraries. I said, ‘God, how did you do this?’” chuckles Point in amazement.

The project is called Write to Read, and it started when Point became B.C.'s 28th lieutenant-governor in 2007. The first aboriginal person to hold the post, Point knew aboriginal literacy rates are far below Canadian average.

For some, it’s hard just getting a book. Of 600-plus First Nations in Canada, less than a third have a library.

"A book is a fork in the road. It’s a turning place. It’s got the power to create a different future," said Point, a member of the Skowkale First Nation.

When Point visited First Nations as lieutenant-governor, he would bring a box of donated books. He was pleasantly surprised to watch children snap them up.

That's when Point got to talking with Blacker, his aide-de-camp. Both are members of the Rotary Club, a secular charity with the motto "Service above Self," known for its overseas literacy programs.

"He asks, 'What are we doing in our own backyard?'" said Blacker. "I said, ‘I wouldn't have a clue, your honour. But I'm gonna find out.’ That was the start of this amazing journey."

The retired police officer recruited a team of retired librarians, who began seeking book donations for First Nations. They were quickly swamped with new and used books, so they set up headquarters in a donated storage locker. The project took on new scope in 2011, when trailer manufacturer Britco offered a free trailer to house a library.

Blacker arranged to have it transported hundreds of kilometres to the Toosey First Nation in the B.C. Interior, where community members had been driving an hour to take children to a library, which they did once a week. Suddenly, they had their own, with over 3,000 books.

“The trailer got here one day, and the next day they had it set up. The next day, we had the grand opening," said Shirley Johnny, Toosey’s education co-ordinator.

That success translated into more trailers, more books and donated labour from hundreds of Rotarians. Companies joined in with financial donations, as did First Nations with “sweat equity” contributions.

“We ask them to prepare the site, get some electricity, all those things we need you to do,” said Blacker. “We also ask for a member of the community that we can train to be library technician, to look after the books.”

A place to read and meet

When the Malahat First Nation teamed up with Write to Read, an architect donated his time to help the community imagine what two trailers and a library might become.

The surprising result, modelled after a traditional longhouse, will act a community meeting space and literacy centre. It will also house a language and cultural learning program.

Chief Michael Harry of the Malahat First Nation says it was built entirely from donated services and fundraising, without any federal or provincial support.

"It’s showed the government that we can do this without them, and we want to thrive,” said Harry. “But more importantly, we want to create relationships with external communities surrounding us."

It’s connecting these folks, breaking down barriers that should never have been there. And they're coming out to the communities for the first time, saying "We want to help."— Steven Point

Point ended his term as lieutenant-governor in 2012  and was recently reappointed as a provincial court judge. But he’s thrilled to see Write to Read continue to grow.

“It’s connecting these folks, breaking down barriers that should never have been there. And they're coming out to the communities for the first time, saying, ‘We want to help,’" said Point.

B.C. Lieutenant-Governor Judith Guichon enthusiastically endorsed the project when she took over the post. Six libraries have been opened, with six more on the way. Thirty-thousand books have been donated so far.

Tune into The National tonight on CBC Television for more on this story.