Alanis Obomsawin has made 40 documentaries since 1971. At 82 she's still making films and, at the same time, sharing her wisdown with aspiring indigenous filmmakers. 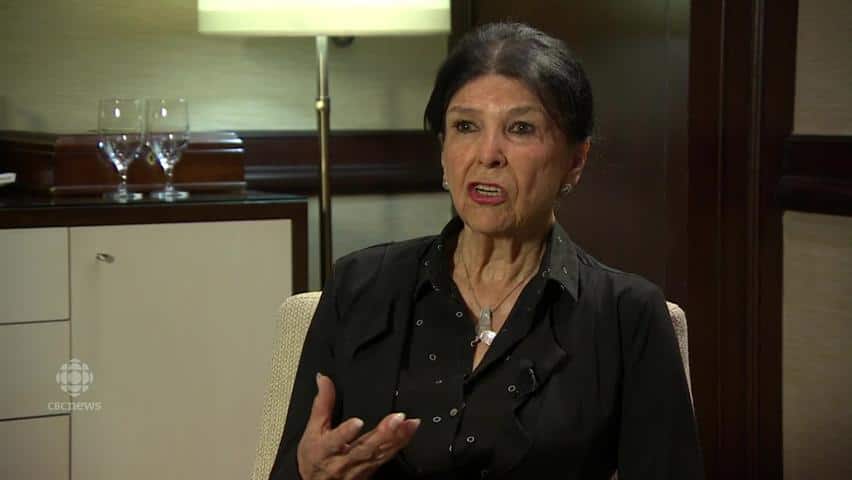 6 years ago
2:08
Alanis Obomsawin sits down with the CBC's Jillian Taylor to talk about what it takes to be a successful documentary filmmaker. 2:08

At 82 years old, there is no sign that Alanis Obomsawin will be putting down her camera any time soon.

When asked what's next for the legendary documentary film maker, Obomsawin said "another film, and another film."

Currently Obomsawin is working on a film about basic human rights for First Nations children.

"It is kind of surprising that at this time in our lives we have to fight for equal rights to education and health services," said Obomsawin.

She's been following Cindy Blackstock, the executive director of the First Nations Child and Family Caring Society of Canada, through the courts as Blackstock challenges the federal government to treat all children, on and off reserve, as equals.

Obomsawin was in Winnipeg on Monday to help launch the third class of the National Screen Institute's Aboriginal Documentary training program. She was there to offer advice to the aspiring filmmakers.

Listening, she said, is the most important thing when it comes to documentary filmmaking.

"The root of things for me is that one must have a lot of patience and a lot of love for what you do," said Obomsawin.

Obomsawin said it's an honour for her to tell peoples' stories and integral to understanding who we are.

"If you go and you say, 'oh, I know the story, I don't need to hear anymore,' there is trouble there."

For her, the real story comes out while she sits and listens. It's a process of discovery.

"The best gift is to give time. Time to hear and to make those people you are talking to feel comfortable."

Obamsawin's career started with singing. That was her way to get to kids and educate them about First Nation history.

"My main concern was education," said Obomsawin. "I was trying hard to find a way into the classroom. I was very young and wanted to influence change of what they were teaching about the history of this country."

I was very young and wanted to influence change of what they were teaching about the history of this country.- Alanis Obomsawin

She got into the classroom with music — and as for film, that started with a swimming pool.

Children in her community, Odanak in Quebec, could no longer swim in the St. Francis River. A pool was built for the children in the neighbouring town. The First Nations children were not allowed to swim in it. So Obomsawin, who was a singer, held fundraising concerts and got the pool built.

CBC did a half hour program on her accomplishment.

"It was from there the National Film Board (NFB) saw it and I was invited by some producers to talk to some of the filmmakers there," said Obomsawin. "I discovered that they had a studio that only catered to [the] classroom, with educational film strips."

Now, she has 40 documentaries under belt with the NFB.

Her first was Christmas at Moose Factory. The short film took the viewer inside of the north eastern Ontario residential school at Christmas time.

"At night I would go and sing for the children in the dorm where the smallest ones were. Some of them were five years old," said Obomsawin.

"They were really far from their own family and I thought, 'oh they are so small to be taken away like that.' I would go and sing lullabies and tell them stories at night."

Last summer, 45 years after making that film, Obomsawin returned to the area, to make her latest film, Trick or Treaty.

While at a conference on Treaty 9, a voice came in her ear, singing one of those lullabies. It was one of the children from Moose Factory.

"I love those children, I feel very attached to Moose Factory because of that," said Obomsawin.

Trick or Treaty was released last year. Obomsawin made history as the first indigenous filmmaker to screen a film in the Toronto International Film Festival's Master's program.