Quebec's newly reopened bars, nightclubs and other venues where people gather could be closed and owners and customers fined if they do not respect COVID-19 rules, said Health Minister Christian Dubé.

Quebec's health minister says the province will not hesitate to shut down bars, nightclubs and other gathering places if they don't comply with COVID-19 regulations, after a new spike in infections was detected last week on Montreal's South Shore.

By Thursday, the province will release details about how customers and venues could be fined if they don't respect the rules, Health Minister Christian Dubé said at a news conference Monday. There will also be an increased police presence in these venues starting on Thursday.

"Your responsibility is to ensure public health directives are complied with," Dubé said, addressing venue owners at the news conference.

"If the rules are not respected, we will close your venue."

Dubé said they are also looking at different ways to ensure COVID-19 restrictions are followed, such as stricter enforcement of a venue's reduced capacity, closing bars and nightclubs earlier and ensuring clients remain seated.

Health Ministry officials are in contact with their counterparts in the Public Security Ministry to determine how clients and venues would be penalized, he said. 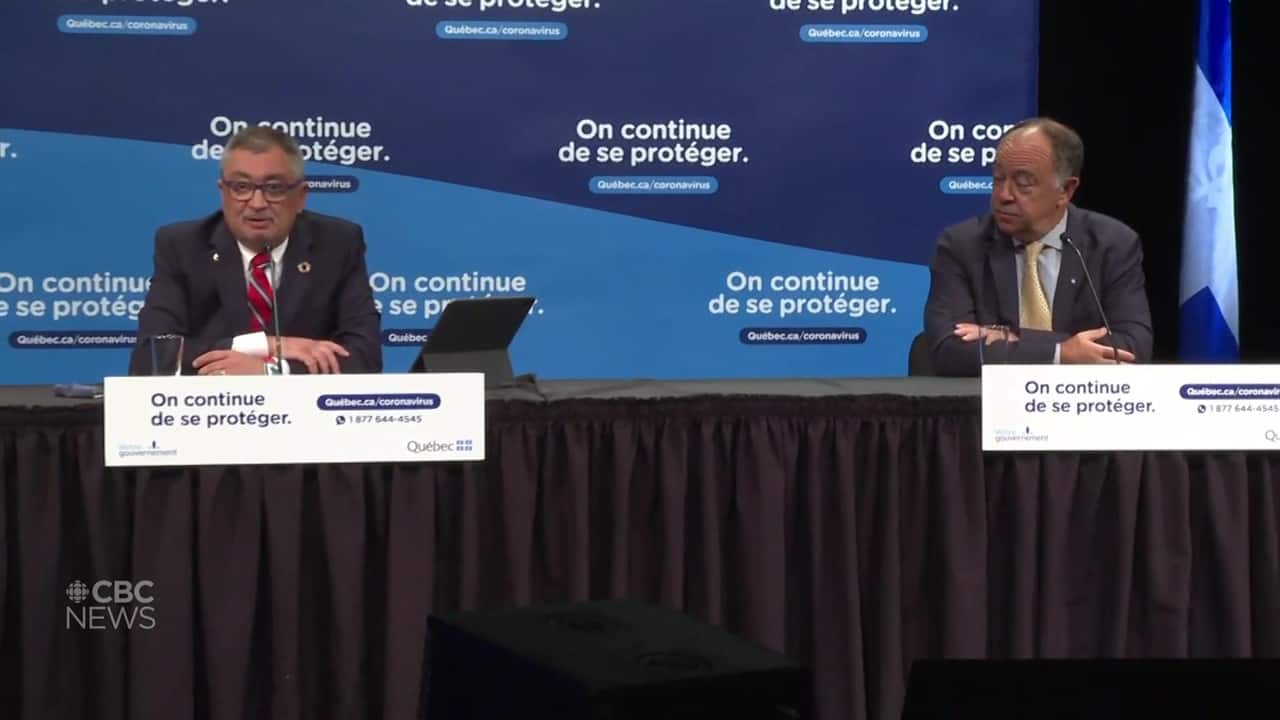 3 months ago
1:26
Dr. Arruda is urging Quebecers to respect physical distancing and public health rules, saying otherwise efforts to control the spread of COVID-19 will have been for nothing. 1:26

The penalties won't be limited to nightlife, Dubé said. Quebec will also crack down on any venue where people gather — including beaches and pools — if physical-distancing rules aren't being respected.

Dubé repeated the importance of respecting the two-metre rule, washing hands and wearing a mask in situations where keeping your distance is impossible.

"Take advantage of this beautiful weather to relax, but still remain prudent as much as possible," he said.

Bars across the province were given the green light to reopen on June 25.

Quebec announced it would crack down on venues after several young people in the Montérégie tested positive for COVID-19.

According to Dr. Julie Loslier, public health director of the CISSS de la Montérégie, some 60 young people attended the house parties in the region last week. More than 20 have since tested positive for COVID-19.

Public health authorities are asking anyone who was at the bar between 8 p.m. and 3 a.m. June 30 to get tested. A Facebook post by the Mile Public House Sunday said the establishment is working closely with health officials.

"All we need to do is look at the United States. A minority of delinquents can put at risk the health and recovery of Quebecers," Dubé said.

"We would all like to to return to the way things were before the pandemic," Quach told Radio-Canada. "The problem is, as soon as we let up a little bit, the beast comes back to bite us full-force, and we'll return to how we were in March and April."

If young people want to see their friends, Quach recommends spending time outside, where there is air circulation, and maintaining the two-metre physical distancing rule.

She added that while young adults will mostly not become as sick as older people, there can still be long-term impacts on their health if they are infected with COVID-19.

Dr. Quoc Nguyen, a geriatrician and epidemiologist at the Centre hospitalier de l'Université de Montréal (CHUM), says people need to remember they can have and transmit COVID-19 even when they aren't displaying any symptoms.

"Once that happens, then it's really hard to control, and if it does get to someone you care about, or even someone you don't even know about that is older and does have a more severe form of the disease, then that is problematic," Nguyen said.

He said physical distancing regulations should be enforced to keep people from spreading the virus — but allowing some kind of normalcy is important, too.

"You need the stick and the carrot. It's absolutely required, because people need a kind, friendly reminder once in awhile."

Paul Desbaillets, co-owner of Montreal's Pub Burgundy Lion and a member of the Nouvelle Association des Bars du Québec, said bars and restaurants are working together to comply with the regulations.

But he said owners also need to hold each other accountable, and inspectors need to be more thorough.

"In the end, no matter what this conversation leads to, nobody wants bars and restaurants to close again; not the owners and not the customers and not the staff."

With files from CBC Montreal's Daybreak and Jaela Bernstien