The body of Capt. Jennifer Casey was returned to Halifax Sunday, welcomed by family, friends and dignitaries for a ramp ceremony and motorcade through parts of her hometown.

The body of Capt. Jennifer Casey was returned to Halifax Sunday, welcomed by family, friends and dignitaries for a ramp ceremony and motorcade through parts of Casey's hometown.

Casey, 35, was a public affairs officer for the Canadian Forces Snowbirds and former journalist. She died on May 17 when the aircraft she was in crashed after takeoff in Kamloops, B.C.

That final flight was part of the Snowbirds' cross-country tour to recognize the efforts of Canadians in the midst of the COVID-19 pandemic. It was dubbed Operation Inspiration.

Casey's body arrived home from B.C. at the Halifax Stanfield International Airport around 5 p.m. AT Sunday in a Royal Canadian Air Force plane. It was met by a military honour guard and carried by nine uniformed members to a hearse that was waiting on the tarmac.

Payette, an astronaut, told reporters after the ceremony that she is familiar with the risks inherent to working in the air force, and "accidents happen."

"No matter how we train, we know that there are risky parts within this job. And that's why I'm so proud of them."

"The fact that this happened during Operation Inspiration, where they were going around cheering us Canadians, is even more touching," said Payette.

Around 5:20 p.m., the motorcade left the airport to drive by parts of Halifax that were important to Casey in her life. Those include Highland Park Junior High, where she went to school, the Lou Goddard Ball Park, where she played growing up, and her childhood home. 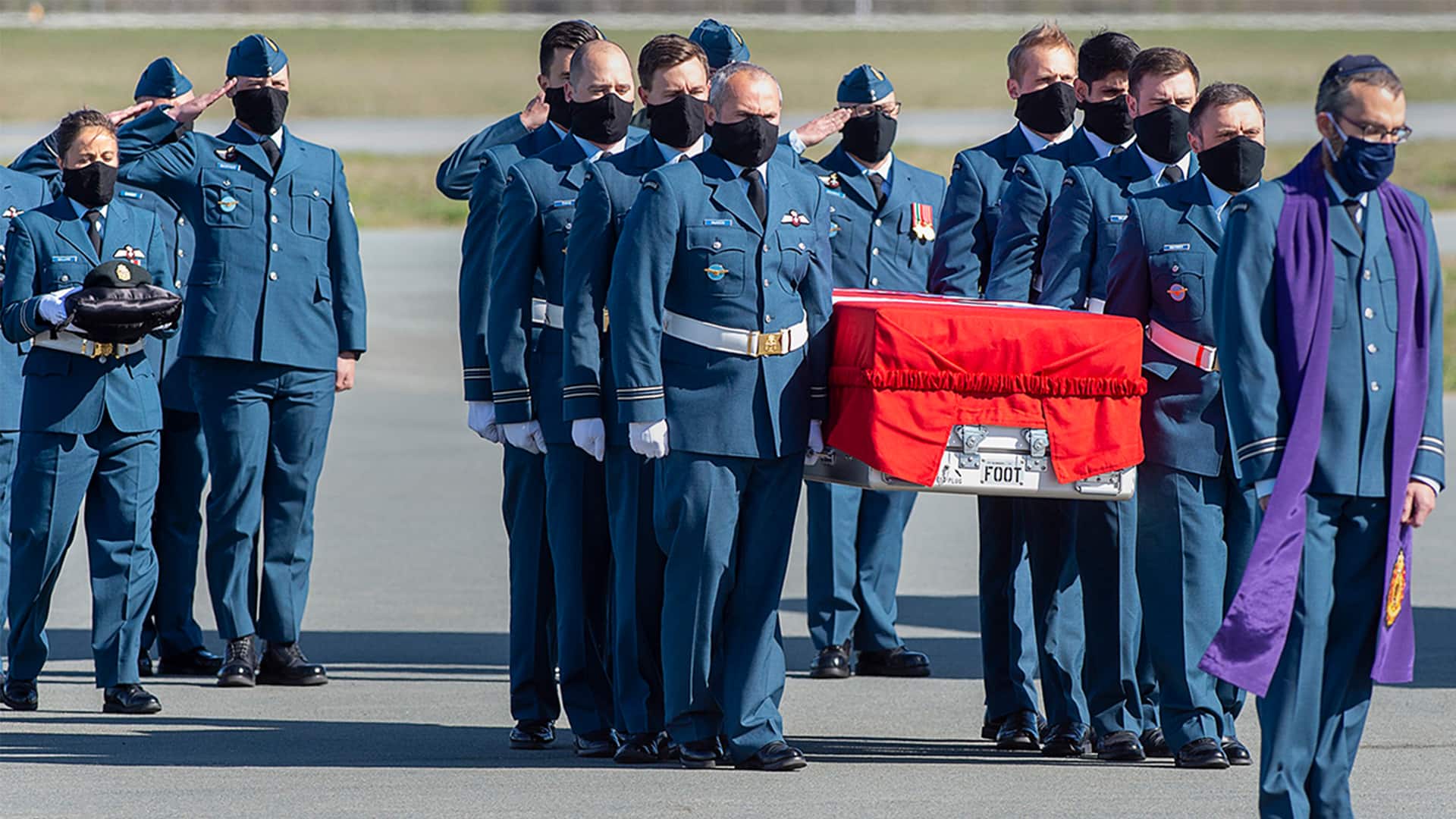 5 months ago
2:13
The body of Capt. Jennifer Casey of the Canadian Forces Snowbirds was returned to Halifax and honoured with a special motorcade through the streets of her hometown. 2:13

At the request of Casey's family, spectators were asked to respect physical distancing measures in relation to COVID-19, and encouraged to wear the colours of the Snowbirds — red and white — in Casey's honour. The family also said that it would be appropriate to wear Habs hockey jerseys, Tragically Hip apparel and Star Wars clothing, as Casey was a fan of all three.

Meghan Groff, Casey's friend and former colleague, took part in the ramp ceremony Sunday afternoon. She said Casey had close friends across the country who were "ready to hop on planes" to join in Sunday's ceremony, but couldn't because of COVID-19 travel restrictions.

"I know that's been really difficult for them to not be able to be a part of this, so I'm grateful that I'm in the city," Groff said.

Groff said Casey was "fiercely proud" of her hometown and went out of her way to help Groff learn her way around the city when she moved to Nova Scotia. The two met about 10 years ago when they worked together as radio talk-show producers at News 95.7.

"Our friendship quickly expanded beyond the office walls," Groff said in an interview with CBC News Network before Sunday's ceremony.

The last time they spoke was via text message on the day Casey flew over Halifax in a Snowbirds plane on May 3, the first day of Operation Inspiration. Groff said Casey found it hard to be so close to her loved ones and yet unable to see them because of COVID-19.

"She sent a text and it said, 'It sure did look nice down there,'" said Groff.

Many of the friends and colleagues who have spoken about Casey since her death have said she had a radiant and ever-present smile.

Corrine MacLellan, a longtime friend of Casey's, said it was her signature.

"It would be a rare occasion you would not see Capt. Jennifer Casey with a smile on her face," she said. "She was that person."

Hundreds of people lined the highway and overpasses on the 40-kilometre route from the airport and waited on sidewalks and street corners on the motorcade route in the city to pay tribute to Casey.

MacLellan said Casey would have been surprised and humbled by the outpouring of support.

But, she added, "It would never surprise anybody else to see this honour for a Canadian hero."

Nova Scotians and the military community joined together in solidarity and sympathy as they salute Captain Jenn Casey <a href="https://t.co/7PmIxsEDYZ">pic.twitter.com/7PmIxsEDYZ</a>

"When your brothers and sisters are mourning the loss of one, you can't just watch it on TV," Murphy said.

Casey's family has not spoken publicly, but released a statement last week, which MacLellan read on their behalf. The family said Nova Scotia will be Casey's final resting place.

Steve Will, the former commanding officer of the Snowbirds from 2002 to 2004, said the Snowbirds will need time to "regroup" after last week's crash.

"They need time to themselves to sort through a whole bunch of things, technically and emotionally, that are going on right now. They will come out the other side. They always do and they always will," Will said.

The day after the crash, current Snowbirds commanding officer Lt.-Col. Mike French said the cause of the crash was unknown, and an investigation could take up to a year to complete.

The motorcade ended Sunday evening at the Atlantic Funeral Home on Bayers Road.