Nearly two years to the day after Cpl. Nolan Caribou died by suicide, his mother has filed a lawsuit against the Federal Government for negligence over the death of her son.

Cpl. Nolan Caribou died by suicide in 2017 during training exercise, following allegations he was harassed

The mother of a Manitoba soldier who died in 2017 is suing the federal government for negligence in the death of her son.

Cpl. Nolan Caribou, 26, died by suicide in November 2017 while at CFB Shilo, in southwestern Manitoba, for a training exercise. He had served as an infantryman with the Royal Winnipeg Rifles, a reserve regiment, for five years.

Freda Caribou, Nolan's mother, filed the civil lawsuit in the Manitoba Court of Queen's Bench in mid-November, nearly two years to the day Caribou took his life. In it, she says her son was denied opportunities in the military because he was Indigenous.

According to the statement of claim, Caribou was called various derogatory names, like "slow" and "retarded." It also alleges his superiors were present and aware of the abuse but did nothing to stop it.

"The entire time Cpl. Caribou participated in the reserves, he was marginalized because of his race and disrespected by junior ranks and senior ranks," the lawsuit says.

Caribou joined the Canadian Armed Forces in 2012. His dream was to be a chaplain to Indigenous people either in the Armed Forces or in the prison system, like his uncle, Ovide Caribou, who was a chaplain at Stony Mountain Institution.

Caribou died a month after graduating with a bachelor of arts in sociology from the University of Winnipeg. He had reported being bullied and hazed a year before he died.

In the statement of claim, Freda says her son suffered in silence for years before that.

In December 2014, Caribou fractured his clavicle during training. It wasn't until 2015 that he revealed to his family that his injury was a result of being "jumped" by several members of his unit, according to the lawsuit.

"He did not want to bring shame on his unit or 'tell' on his fellow soldiers, so he reported it as an 'injury' during the exercise and did not report the others involved for fighting or picking on him."

Cpl. Caribou felt increasingly like his chain of command was ignoring him because of his race.- Freda Caribou's lawsuit

In August 2015, Caribou was eligible for a promotion to the rank of corporal, but was only promoted to "private (trained)." He didn't become a corporal until April 2016, costing him a loss of income and seniority, the lawsuit says.

"He had a reasonable expectation to be free from abuse and to be treated equitably among his peers on his merits and in spite of his race," said the statement of claim.

The lawsuit names three of Caribou's superiors who allegedly allowed the bullying to continue: Lt.-Col. S.P, Moran, the commanding officer of the regiment, along with a sergeant and a chief warrant officer who were designated harassment advisors in the regiment.

"Canada, through their servants, owed a duty of care to ensure that their servants followed proper policies and procedures and that they would be properly administered and followed," said the lawsuit.

In December 2018, Brig.-Gen. Trevor Cadieu — who was the commander of the Canadian Armed Forces 3rd Canadian Division at the time — told CBC News he had reprimanded five soldiers in connection with the reports of Carbiou's harassment, and had "relieved an individual from the performance of his military duties."

Watch a December 2018 report on harassment at Minto Armoury: 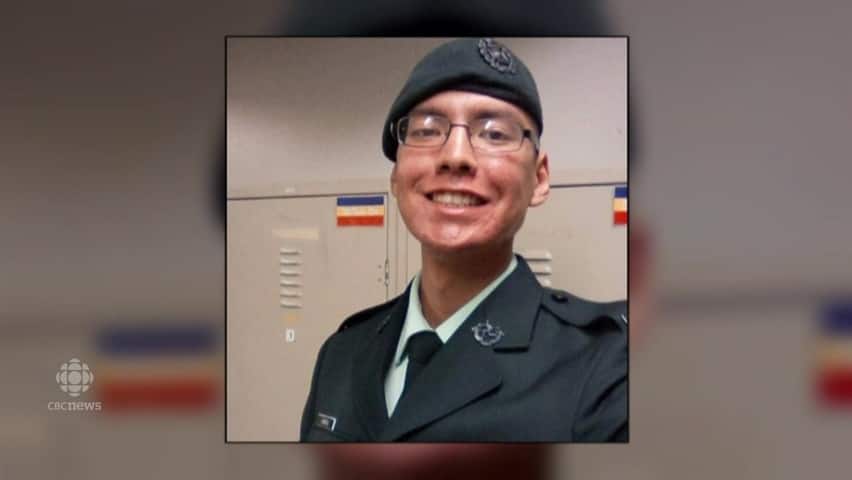 2 years agoVideo
2:27
A Winnipeg reservist who the military said died during training last November in fact stepped away from other soldiers on that exercise and killed himself — a year after telling his superiors he was being bullied and harassed. 2:27

Last week, a spokesperson for the Canadian Armed Forces said that although a military investigation found no grounds for criminal charges, the Forces continues to take Caribou's death seriously,

"As such, the results of these investigations have been referred to the unit for administrative and/or disciplinary action, if warranted. Given ongoing litigation, it would be inappropriate to comment further at this time," the spokesperson said in an email to CBC News.

The Department of National Defence would not comment on the lawsuit and says it has not yet received notice of the statement of claim.

In August 2016, the lawsuit says, Caribou's locker was vandalized with permanent marker, in addition to being plastered with stickers saying "non-serviceable" and "free from explosives."

He reported it to his superiors, but the lawsuit says no record was put in Caribou's file. Two months later, Caribou filed a written harassment complaint.

"No attempt was made to find out who had defaced the locker and no one ordered the locker cleaned or painted," the lawsuit says.

The locker remained defaced for at least six months after Caribou's death, a "testament to the way Cpl. Caribou was ignored and marginalized by the junior ranks and even by his own chain of command," said the civil suit.

In the spring of 2017, months before Caribou died, he signed up for a summer job with the military as a camp leader in Wainwright, Alta. — a position he was well qualified for, according to the lawsuit.

He didn't get the job, nor did he receive a response to his application, and "felt disrespected and ignored," the lawsuit says.

"Cpl. Caribou felt increasingly like his chain of command was ignoring him because of his race."

The day Caribou died, his unit was at CFB Shilo for a training exercise. During a tactical scenario, Caribou asked to be excused to use the bathroom. He never returned.

Later in the day during dinner, a supervisor noticed Caribou had not made his way through the food line and sent two reservists to look for him. They found him dead in a field near the toilets.

Though there was no live ammunition used in the training exercise, it was later determined that the ammunition that killed Caribou was "live."

The lawsuit says there has been no explanation of how Caribou would have obtained the ammunition. 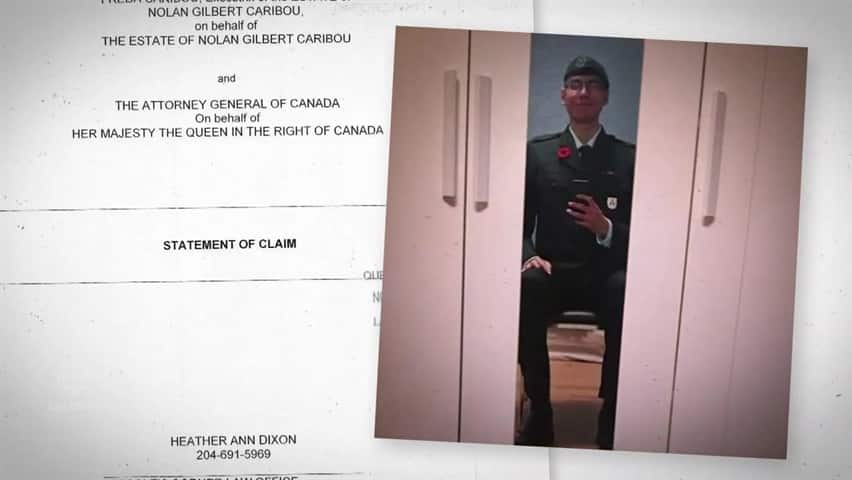 1 year agoVideo
1:52
The mother of a Manitoba soldier who died in 2017 is suing the federal government for negligence in the death of her son. 1:52

With files from Joanne Levasseur