Multiple towns across central Newfoundland declared states of emergency Monday night after the remnants of Hurricane Matthew pounded parts of the province with heavy rains.

Multiple towns across central Newfoundland declared states of emergency Monday night after the remnants of Hurricane Matthew pounded parts of the province with heavy rains.

The town of St. Alban's, a community of about 1,200, was cut off from surrounding communities when the main bridge into town — the five-metre-high and 41-metre-long Swanger Cove Bridge — was washed away.

In a Facebook post, the town asked residents to stay indoors and call emergency responders if they run into trouble.

LeRoux said the town was expected to see more than 200 millimetres of rain by 4:30 a.m.

The mayor of Lewisporte said that roads there were starting to weaken at their sides from heavy rainfall.

"We've got a lot of people with basements flooded," said Mayor Brian Sceviour. "We've got fire trucks out pumping water away."

In Little Burnt Bay, residents were calling Mayor Laverne Suppa about water coming out of showerheads.

"It's unreal," said Suppa. "We're completely cut off down here."

The Burgeo Highway on the southern coast of Newfoundland was also shut down by heavy flooding and rains passing through the province on Monday.

According to Dave MacDonald, the deputy chief at Burgeo's fire department, four families were forced out of their homes by the flooding on Monday.

He said the families left as a safety precaution, and all are staying with friends in the area.

The rainfall has affected traffic across the island — and led to one stunning escape in central Newfoundland.

At about 1 p.m., a man escaped his sinking SUV after it fell over a guardrail into a body of water west of Gander.

According to Const. Shawn Hannaford of the Gander RCMP detachment, the car was falling nose-first after it had hydroplaned on the Trans-Canada Highway.

"After it hit the water, he tried escaping out the driver-side door, [but] the door would not open," he said. "So before it fully submerged, he got out of the passenger-side door, and at that point he got through the water and came up onto the rocks."

The man was checked out at hospital, Hannaford said, but escaped the accident with no injuries.

The Provincial Government advised residents at 1 p.m. on Monday afternoon to prepare for flooding and power outages — and to prepare a 72-hour emergency kit.

"Fire and Emergency Services has been in contact with communities and emergency service providers to advise them to take pre-cautionary measures, to review their emergency management plans and ensure all the proper local contact information is in place," the provincial government said in a press release.

Heavy rainfall warnings — with amounts ranging from 50 mm to 140 mm — have been issued for most of Newfoundland.

Eddie Joyce, the minister for municipal affairs, said Monday afternoon that the government was hoping for the best, but preparing for the worst.

"Hopefully we'll get through this with very little damage, if not tomorrow we can assess the damage," he said. "We can repair any bridge, culvert, flooding."

Joyce urged anyone in danger to call 911 or their local emergency lines.

Burgeo and the Connaigre and Burin Peninsulas are expected to be the hardest hit, according to David Neil, a meteorologist with Environment Canada.

"Looking through those three regions, [we're] looking at really a minimum of 60 mm but looking up to 140 over some parts of those regions," Neil told CBC Radio's The St. John's Morning Show.

"Obviously with [Hurricane] Matthew that went along the eastern United States not that long ago, [the system] is tapping into some of that moisture and that tends to certainly bump up the rainfall amounts quite a bit." 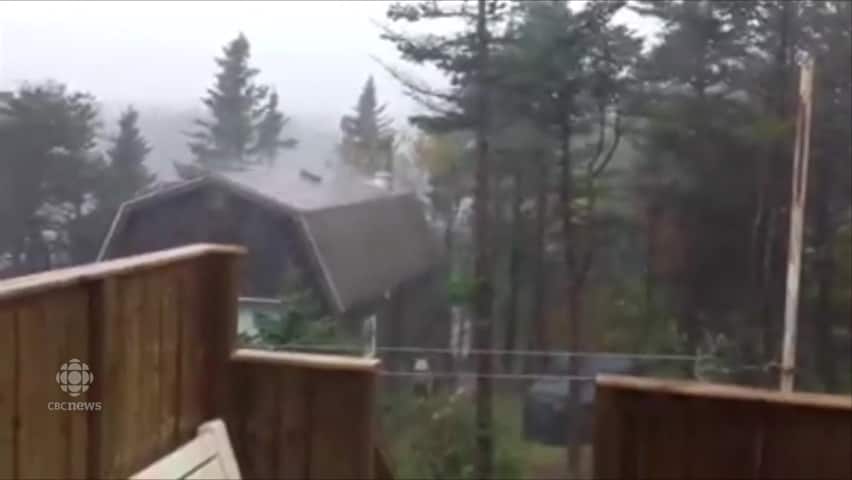 Guy Hann, a long-time resident and a volunteer firefighter in Burgeo, said he had never seen such a huge amount of rain in his town before.

"There's water here in Burgeo today that was never in places before."

He says his fire department has been called out to at least four reports of flooding, and says a crew of more than a dozen volunteers will be on high alert Monday night as the rain continues to fall.

Neil said the weather system is expected to move across most of the island Monday morning and will carry into the night.

To read the Environment Canada weather alerts for Newfoundland and Labrador, click here.

With files from Chris Ensing and the St. John's Morning Show