They received great news and bad news. They cried, made jokes, and “took it on the chin." It was a year of intimacy and honesty that I will never forget. Judith Pyke, director Cracking Cancer

Seeing the doctor is an incredibly personal, private experience for most of us. There’s only been a few times when I’ve had another person in the room with me at the doctor’s office (my husband, when I was pregnant with our son).

But Cracking Cancer is a film that relies on the intimate participation of patients in their most vulnerable moments — people who let us in and allow us to witness their very personal experiences with cancer. It was conceived largely as an observational documentary, focused on patients and doctors in the Personalized OncoGenomics (POG) trial at the BC Cancer Agency in Vancouver.

Quietly, often in the corner, we filmed as patients waited anxiously for results, as they went for biopsies and more scans and blood work, as they received great news and bad news. They cried, made jokes, and “took it on the chin.” We filmed at their homes and with family members. We filmed as the POG trial team debated potential treatments based on genomic analyses. We joined them, for a little while anyway, on the “rollercoaster ride”— as many describe it — of cancer. It was a year of intimacy and honesty that I will never forget.

WEB EXTRA: Laura has stage 4 cancer, but is still hopeful.

Some POG trial patients have had remarkable, life-saving results with their treatment. Others had improvements for a shorter time, still others, no success at all. That is the nature of a clinical trial like POG, because doctors and scientists are wrestling with unknowns. They build their knowledge-base patient by patient, one treatment attempt after another. It is a hopeful and difficult process for everybody. And it is essential, if the medical and scientific communities are to continue to find ways of treating cancer effectively.

"Everyone participated in the film because they wanted to give something back. They hoped that their journey would help to inform others dealing with cancer, that it might pave the way to future treatment for another cancer patient down the road."

Everyone participated in the film because they wanted to give something back. They hoped that their journey would help to inform others dealing with cancer, that it might pave the way to future treatment for another cancer patient down the road, or that it would bring attention to the incredible work being done by the POG trial and the BC Cancer Agency.

Most of the patients in the film had been diagnosed with incurable cancer. There were two wonderful participants who passed away while we were editing the film. On each occasion, I was deeply saddened. 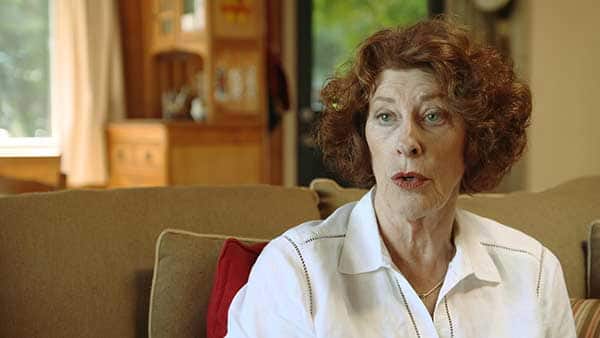 Trish Keating participated in the trial and in Cracking Cancer.

When friends asked me about what I was up to, they often said “Wow, that must be challenging.” And it’s true, it wasn’t an easy film to make. But it seemed like nothing compared to what the patients and their families are going through. In the face of it all, I have been continually struck by their daily courage, strength, and desire to have their experiences inform the future of cancer treatment, along with their graciousness in allowing us to film their very personal ordeals.

And so to all the participants: a big grateful “thank you”. Thank you for letting us into your lives, for allowing us in the room, and helping us to learn from your experience. You inspired me, and I’m sure you will inspire others through this film.